If you had it to do over again, what would you change about your coop/run?

We didn't really know what we were doing 3 years ago and my husband did a FANTASTIC job of constructing it. We got very lucky in terms of how well it is placed for drainage when it rains, and for allowing sunshine into the run during the cold winter months while blocking the sun with the tin roof of the run during the summer when the sun is high in the sky. The coop and run are so well-built and secure from predators that we call the complex Fort Cluckz.

I fought hard for a full-height run that I could easily walk into, clean, sit in a chair, etc. Having seen only the "coop/run" setups at Tractor Supply, my husband thought that half-height would have been perfectly fine for chickens but finally gave in to my wishes. He's been really glad now that he's seen how much I enjoy sitting with them and how the chickens enjoy flying up to the successively higher roosts in there for a good vantage point on the world.

What I would change, as great as I think the coop he built is, would be to also have a full-height coop that I could easily enter -- for example to place the new flock on roosts that the older hens aren't using (which varies from night to night). There are three ways into the coop and it's fairly easy to clean out but I long to be able to walk in there.

(I'll post a December view of the set-up. My husband and his son sketched out the layout on their own and constructed it with no formal plans. The chickens also get to free range with supervision -- one of us outside or our 100-pound dog. We are surrounded by woods full of foxes, coyotes, bears, you name it!) 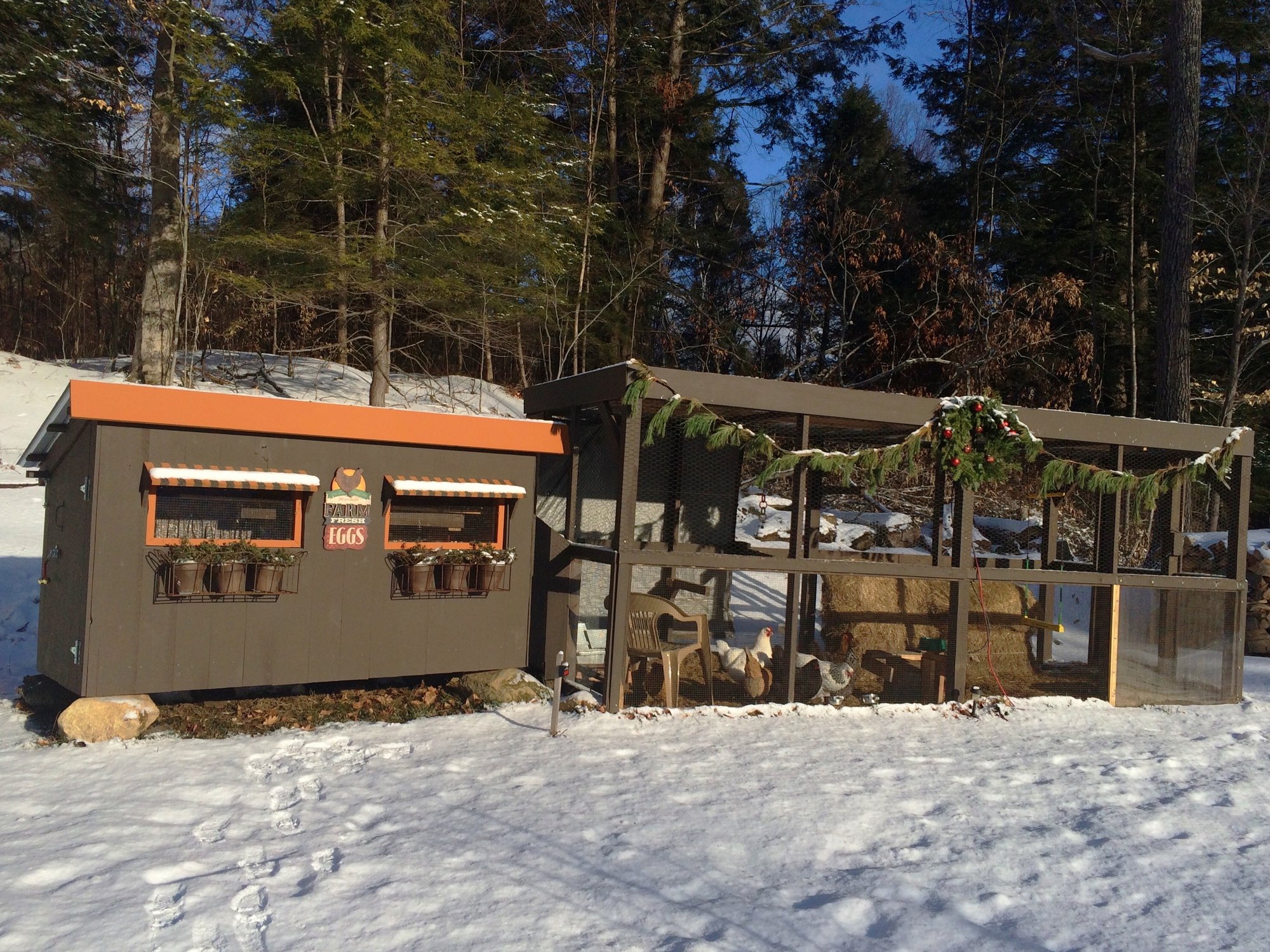 As necessary we change stuff. I started with a large pole shed, 40x40, and improved from there. Last two years we have been changing out the tin siding for wood, and adding more windows and ventilation.

I also have a smaller bantam coop in the back of our barn. I have always wished we had built that bigger. It's 8x10, but bigger would have been better.

I would build mine on a bigger piece of property. That way I'd have more space to expand! Wait a minute, maybe that's not such a good idea. Chicken Math has a by-law, the Law of Rapid Acceleration. It has something to do with square footage, local ordinances and the patience/tolerance of other family members.
Nah, never mind... I'd put it on a bigger piece of property, anyway!

i've changed my run countless times and have plans for expansion and other changes. I agree with the height, the actual coop where they sleep is 4 ft high and 4 feet deep so its easy to clean the mansion where they hang out is 6 ft high plus we dug inside so it's really 7 ft once inside. i also changed the 360 with shade and changed the location of the door at least 4 times lol

here is a video of the 360 enclosure, it's changed since this video a lot so i'll have to do an update video soon!!

My henhouse is a fine size at 12' by 16'. But I would want to be able to put bird netting over my chicken yard so I could confine them. The guineas fly out easily over the 6' fence. But instead I planted a cottonwood tree in the middle of the yard and it's now over 30' tall.

P.S. They do love the shade on those hot summer days tho.

Oh, let me count the ways… I just finished (sort of) a new coop for my 3, still small but much bigger than the prefab that they have been living in. I've never built anything before, and it took me over 2 months to build what is really just a raised "bedroom" for the girls. Part of what took me so long was I wanted to use up some old wood I had laying around, so the plan was designed around that.I love the idea of reuse. but I think if I had known how much more complicated (for me anyway) that would make it, I'd have just gone and bought all the wood new. It ended up being about half and half. Then there was all the stuff I rebuilt because it just wasn't right, and the stuff I rebuilt because I changed my mind/had a better idea. I'm ok with the end result, and I learned a lot, but still haven't gotten a nest box to hang outside, so I have one inside for now.It's just a basic, not fancy coop, but so much sturdier and safer for my girls, and high on personal satisfaction for me, doing it on my own. So, maybe I wouldn't change it after all.

If I have to do it again, I would have built a bigger coop than 10x12 to 12x24 and have 2 runs on opposite sides to accommodate broodies and their chicks. When I first plan and built my shed/coop and run I was only thinking of 10 egg laying hens that I purchase impulsively not for 30 laying hens.
Now I even have a roo or two and multiple newly hatched chicks 5 years later. I was kind of lucky that I didn’t listen to some advice to make the coop 3’ high instead I went 10’ high shed that I was thinking I can convert to garden shed or storage if I didn’t like the chicken business. So does the run that I went 7’ high with clear roof that I might turn into greenhouse if chicken doesn’t work out. But here I am built a 2nd coop last year to accommodate more hens and a roo that I couldn’t part with since I got addicted to incubating our own eggs, each time they hatched, someone wants to buy them.
If I will do it again I would have gone bigger yet.

I would have bought a bigger coop! Nobody warned me about chicken math!

I would have built a coop rather than buying one. I know we will have to build a new one next year, and now I know what I want (and have more knowledge about what is necessary!)

I built the coop inside the covered run for biosecurity/shelter reasons. The run is a post-and-beam thing with a shed roof. I still think that is the best choice for us but I was under a lot of pressure to get it done quickly so I did make mistakes. If I had to do it over I would change several things:
A run and coop tall enough to comfortable walk around in are great ideas as others have suggested. I DID do that and now that I have it, I can't imagine NOT being able to walk in to either. That would cause many complications. So hooray for me doing SOMETHING right