But yes, Q for 30days for sure. I can figure something out. We got lots and lots of land and spare wood. Haha.

older coop pictures but the building is obviously the same still 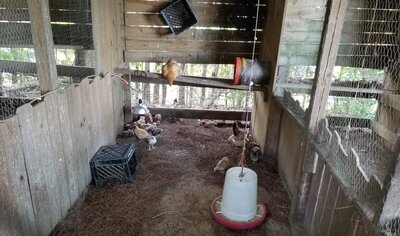 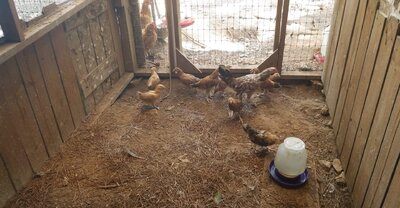 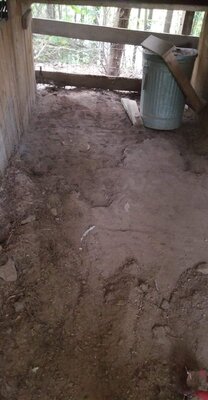 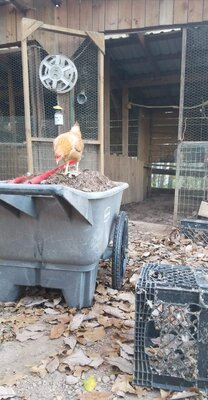 Havent posted in too long. Updates.

Housemate is being a pain. She wanted us to slaughter 3 chickens (heads on) so she could dress and sell them. We dont kill birds but she wouldnt take no for an answer so it led to an argument. Shes *insert your choice of words here*. We told her to stop trying to guilt trip us into it and she went on a tirade that 'if you feel guilty its because' and went into a huge laundry list of why she hates my birds.

Shes living her as a favor to her in her rough times so that just adds to the unreasonable aspect of it.

I wanted to get my mixed flock off layer and only some time of all flock/grower + oyster shell but my feed store doesnt sell it - just chick starter, a couple layer options and a few scratches. The guy said people feed their roos scratch, but from what I've read here, I knew it was just candy! So, sticking with layer. The extra calcium cant be worse than only eating scratch.

I may see if theyll special order something for me from one of their manufacturers. Sounds like something a mom & pop would consider.

Selling 9 cock(rell)s today which will put me down to only the ones I'm keeping. Avary who is like a mini me of my Alpha, Snowflake who is white, Speckles who my roommate likes (same one from the start of this post. I was tempted to sell him out of spite since I'm not personally attached to him) & my Alpha. Also a baby cockrell still following his mama, 1 unsexed older chick and 5 unsexed young chicks.

Those chicks were a surprise. She hatched 13 & did not appreciate that I sold 8 of them. LOL.

Housemates friend was incubating cream legbar chicks that I was going to buy as day olds... incubator failure. only one male one female survived and hes keeping those.

& some of my girls are finally laying!

My housemate says the side coop was 'the gamecock pen' when she lived here previously but I think I am not going to call it that. Maybe Side vs Main. or Back vs Main.

The house is strangely situated so back and front is very vague haha.

The main pens are north east of the house & the trees the chickens roost in are between the house and those pens.

What we call the backyard is to the south out the "back door" of the house which is opposite one of the front doors (obviously) but not both (also obviously). I find this all hilarious and I'm writing it for no reason.

the side / GC / extra coop is off the WEST side of the house, between the house and our real acreage, father from the street

the fun part about the main pens where most of the birds sleep / eat is that it is at the edge of our property, built when there was nothing but empty land around us and we were promised the thin strip up the side of the property could only ever be used as maybe a long driveway to a house set farther back. PLOT TWIST someone had it rezoned and now its like.... a zillion small houses (not 'tiny' ones) smushed close together with next to no side yards. So those chickens are crowing and squawking as close to the neighbors as possible hahaha. I bet they think we have like 6 million birds if they assume what they can hear is multiplied across 15 acres. anyhow the birds hop our fence and wander in the trees between the fence and the road, which is still our property so it's fine but it is silly of them. I think they are smart enough to not go in the road. The peacocks not so much, but that's another post.

anywho, I found a free range nest between a sheet of styrofoam and what used to be the barn that Henrietta was seen around so ... I pulled 6 eggs, left 1 egg. 2 days later the 1 egg was gone. though I guess as I never counted it in the first place, it's not really -1 egg....

someone is laying in Henriettas nest again! yay.

Housemate is being a pain. She wanted us to slaughter 3 chickens (heads on) so she could dress and sell them. We dont kill birds but she wouldnt take no for an answer so it led to an argument.
Click to expand...

If someone wanted me to kill any of my birds, and wouldn't take no for an answer, they would see the wrath of god in me. So sorry you have to deal with that.

Happier: I love all your pics!!!! So neat. Love the egg log.

Beezy said:
If someone wanted me to kill any of my birds, and wouldn't take no for an answer, they would see the wrath of god in me. So sorry you have to deal with that.

It was a whole thing. She casually complains about my birds all the time.

did I mention I have babies?

So why did she want to sell the cleaned birds? Was she going to give you the earnings? Or would she keep it because she helps pay for the upkeep?

jwehl said:
did I mention I have babies?
Click to expand...