I have decided to do an experiment. After reading this paper on Shape Index of eggs and how that can essentially predict the sex of a chick before hatch. I decided why not? I am going to hatch, why not just see if there is any truth to it. It's kind of fun, regardless of outcome! Makes for a great school project that's for sure. The first time I did it I had a decent number of eggs(60) to do the expierement on. I did all the measurements, and hatched 52/60 eggs. I had them separated by predicted gender, unfortunately my cousin (whom they were hatched for) mixed them up, and all the time and attention to detail is lost. I decided to do it again, and make it really easy. I bought eggs that will have chicks that are autosexing!! No more waiting! Immediate gratification!!

Here is a link to the article I read:


Here is the formula we used directly from the article. We just did the shape index calculation, as I am not much of a mathematician and most of the terminology in regard to stepwise logistics regression...blah blah blah was so confusing to me.


The maximum widths and lengths of each egg were measured with using Mutitoyo digital calliper (Mutitoyo, Japan) (±0.01 mm) and their shape index was calculated using the formula:

I bought the digital calipers off eBay, and my daughter and I measure them together.


Below is the first eggs I did.(remember the chicks were mixed together, so I will never know the true outcome) 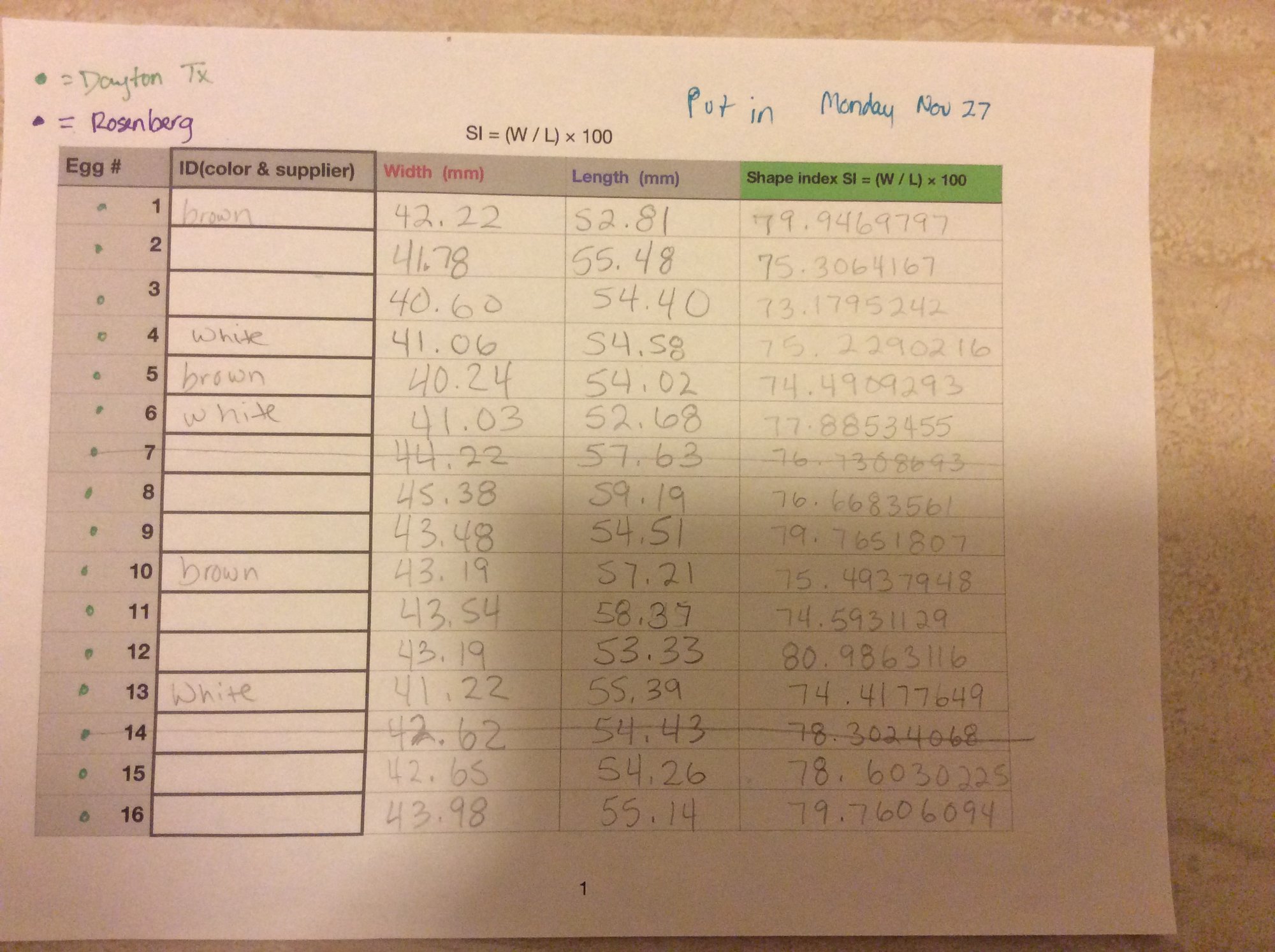 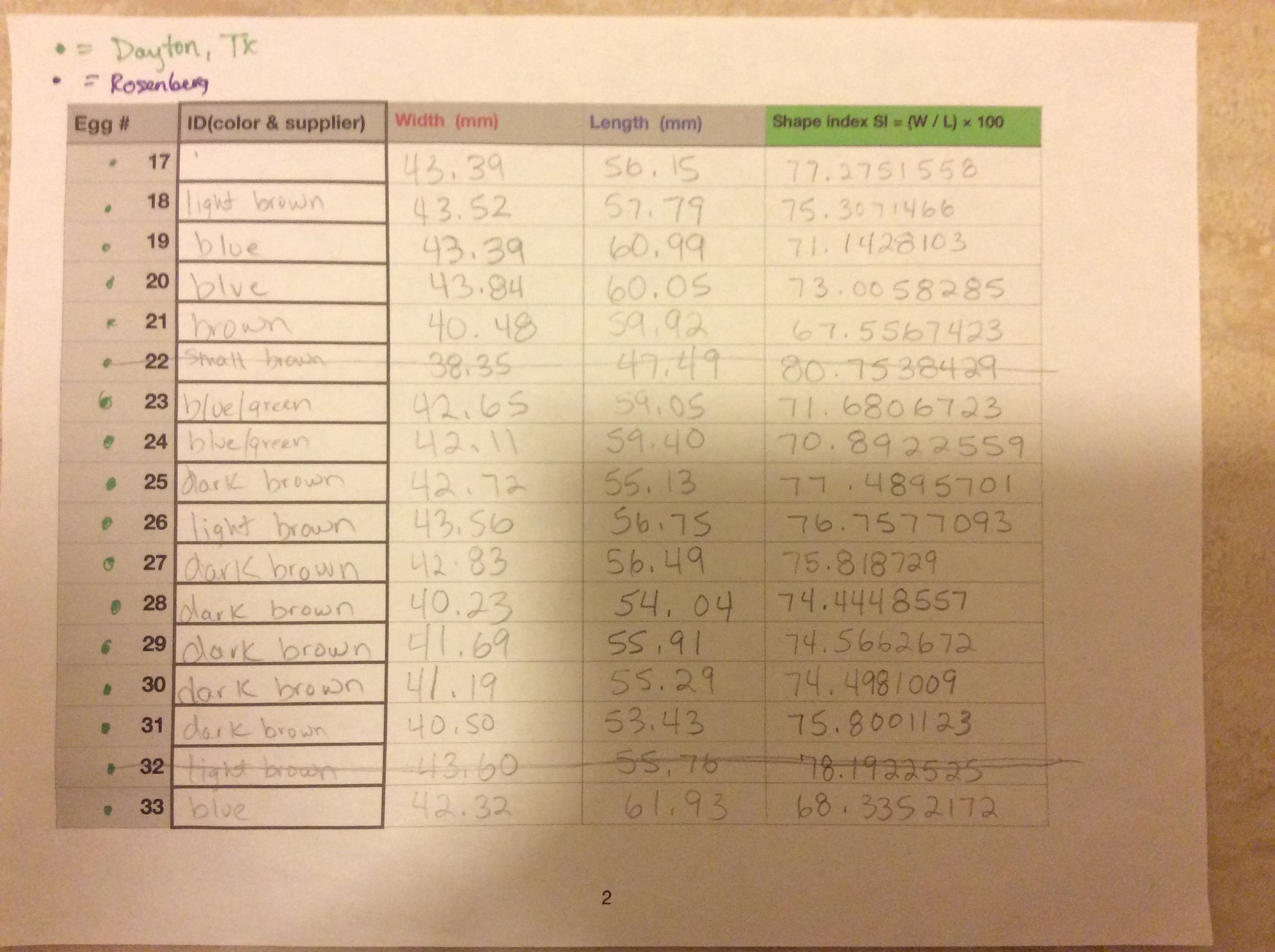 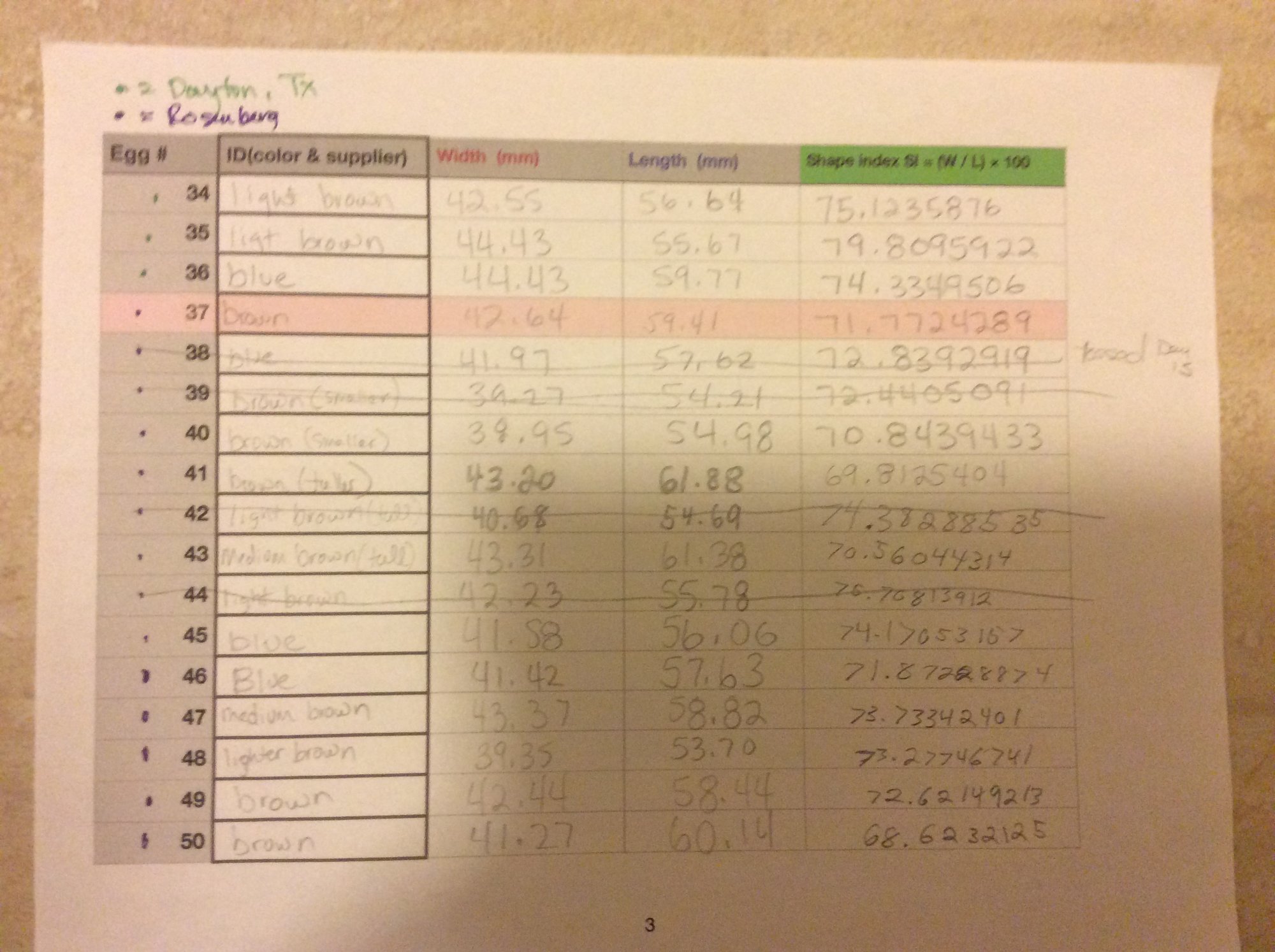 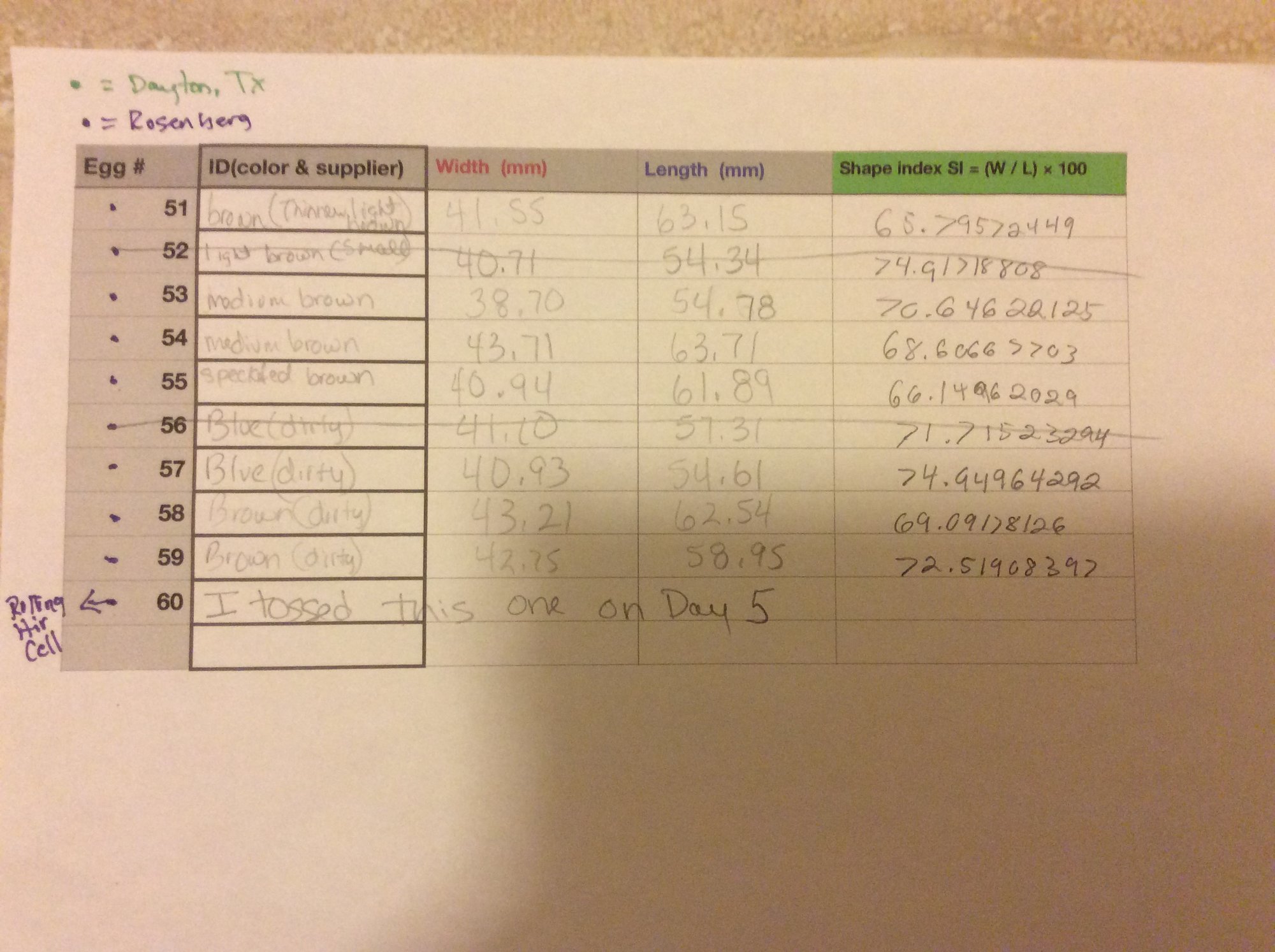 What I did was take the higher SI% and placed them in 1 incubator, and the others in a separate incubator. They were kept separate the entire time, and after hatch, placed in separate brooders.
After 4 days I took them to their new home. My cousin had lost her entire flock in one night, so I incubated 60 mixed breed eggs for her. Unfortunately as I said before they were mixed up and put in one single brooder box. (Importance of communication with her husband) anyway, it was an accident, and it gave me an excuse to try it again!
This time I ordered autosexing olive eggers from Papa's poultry. I ordered 6, and he was very generous with extras, that I received 11!!

They traveled a long, long way in Usps hands(yikes) 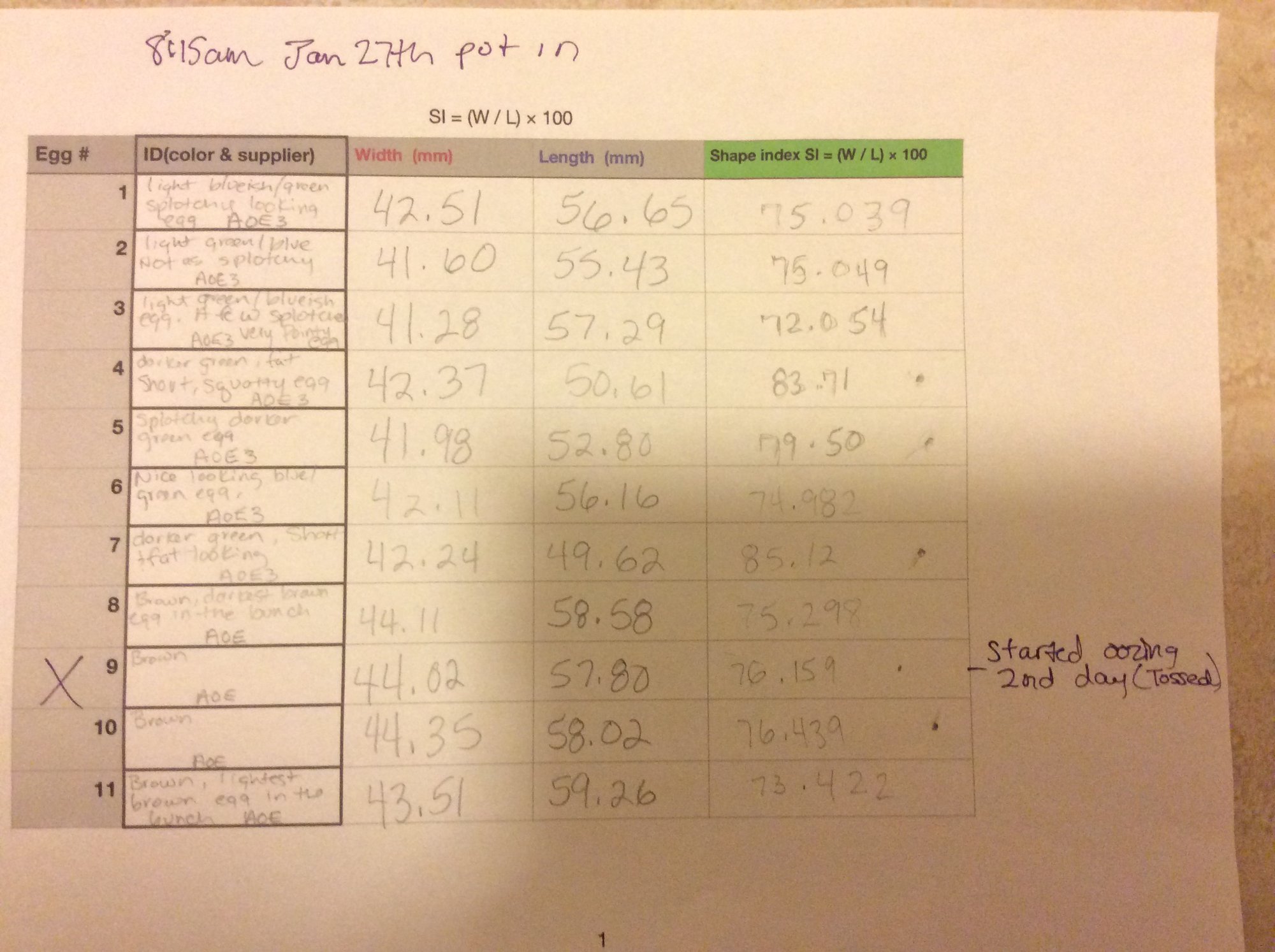 Wish me luck!!
And yes, before anyone says anything, I do realize this is not a tried and true method, otherwise the hatcheries would be doing this!
It's just an expierement!!
If anyone else wants to join, please do!!!

Nksg75 said:
And yes, before anyone says anything, I do realize this is not a tried and true method, otherwise the hatcheries would be doing this!
It's just an expierement!!
If anyone else wants to join, please do!!!
Click to expand...

Keep in mind, it may just take too much time for the hatcheries, and mabe that's why they don't do it.

I would also be interested to see how much difference eggs from the same hen are.
Are they all the same size, or do they differ.

They are from different hens. The size varies slightly, however there are no huge differences. I did not ask how many hens he has laying the eggs, however in regards to the previous eggs I hatched they were from 2 different flocks in 2 different towns here in Texas.

I agree, this is fun!!
In another thread I had another person(cot cot) also doing the expierment with me. I will have to ask her to post her info here as well!!

Sublight said:
Keep in mind, it may just take too much time for the hatcheries, and mabe that's why they don't do it.

I would also be interested to see how much difference eggs from the same hen are.
Are they all the same size, or do they differ.
Click to expand...

There is another thread on here that did this experiment across several farms and pretty much decided that some hens lay pointy eggs, and others lay round eggs, that unless you look at eggs that are all from the same hen and compare HER eggs to each other, that you won't be able to get any decent readings.

I also should add that cot cot added the egg volume to her calculations. I did not have an accurate egg scale, so I omitted the calculation for the volume on my experiment.