What will be the outcome?

So i m getting two chicken, blue hen and white rooster. I m going to breed them and hatch eggs from them..i was thinking what will be the outcome,what possible colours will their chicks be?

I'm not super into chicken color genetics, but I DO know that a "white" bird can either be white or silver and that will affect what color the chicks would be. Do you know the breed of the rooster? That might help figure out if he is white or silver.

The rooster and hen are thee game bird..!

What breed of game bird? (There are a few) If you know, someone might know what color they carry. Or we can check and see if there's a website on them that tells you the genetics of the breed color variations.

As @Kusanar said, the birds could be white or they could be silver.

There are also two different kinds of white (dominant white and recessive white), in addition to silver, which further complicates things. All of those permutations will get you different things.

The hen is Aseel dont know about the rooster..he has some red on his back(should may be)

If the hen's pure blue and from a good line, she should carry two copies of the dominant E (extended black) pattern gene. (E/E)
The rooster, on the other hand, carries a non-solid pattern gene (duckwing if he is pyle.) That's e+. He should be (e+/e+)
Chicks will inherit one copy of that gene from each of them, resulting in all of them being (E/e+) Since E is dominant, they will take after their mother and be solid in colour.

If there's red on his back, we're almost certainly talking dominant white. (I/I) which is called dominant because you only need one copy of it to see white (I/i and I/I are white. i/i is not white).
Your hens does not carry dominant white. (i/i)
The chicks should be (I/i).

If that doesn't interest you, try breeding these two and then breeding the pullets back to their father. That will get you a lot more color variation.

Thankz for the reply..he is not fully pyle..he has just 4 5 red feathers on his back...but i thik they may grow in numbers as he is younger now..!

Thaks for reply it helped

The rooster colour and hens colour will be like this right now..!

Ah--He looks like a sexlink cross! (don't recognise the breed, but who cares?)

So he's actually likely to carry only one dominant White (I/i) because of the parentage, and it looks like she carries the Ml/Ml (melanisation gene--as Aseel are supposed to do, according to my recent research--it enhances the dark edges on her feathers.)

The half that don't inherit a copy of dominant white will show the other available genetics that the E gene will allow. So here's a brief explanation of blue.

Blue is not a true-breeding colour. Blue chickens carry one normal copy of black (bl) and one mutant copy of black (BL, which is also called splash or the blue gene--it dilutes true black.) so (Bl/bl.) Half of the chicks will inherit the (Bl) from mum, and half will inherit (bl).

Dad almost certainly carries (bl/bl) and the chicks will inherit one copy of it from him.

So chicks will be (Bl/bl) or (bl/bl). Of course, half of them will be dominant white, so you won't see a thing. The other half, however, have a 50/50 chance of being black or blue.

And two copies of blue (Bl/Bl) is splash or "true blue," (not to be confused with "self-blue," which is Lavender) 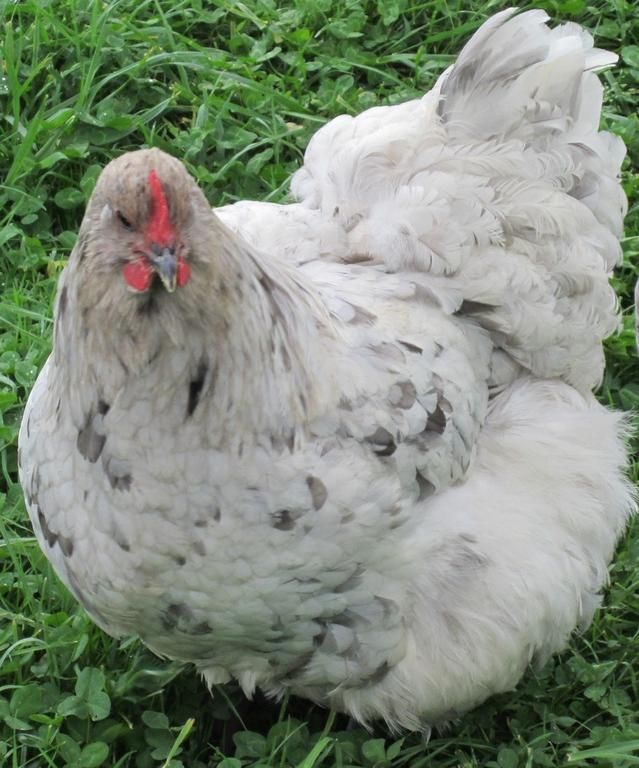 Additional note: two copies of the same mutation of the gene (I/I or bl/bl) is known as homozygous.

If you didn't know that, and you decide to research this further, those two terms should be of great use to you.

What colours are these silkies?