DH took me over to TSC after dinner last night. I had told him that they had some ducklings come in but only two Pekins were left and we wanted four. I also told him that there were two of what I thought were black Swedish (not positive) but one wasn't doing well. When we got there the one little Swedish duckling wasn't in with the other ducklings so I thought it had probably died.

When I began looking at the chicks I found I saw one which looked like it may have died and I was about to get some help when I looked more closely and saw it was the little Swedish. It was alive but not well at all and seemed to be fading fast. DH picked it up and cuddled it, looked it over & said he thought it would be alright if we gave it some extra attn. & got it eating & drinking right away.

Well! I didn't expect that fm him!

Sooooo we picked it up along with the other little Swedish and the two Pekins. We hustled them home and I mixed up some Starter crumbles with Avia Charge & DH took a dropper and got some into the little one first thing. Meanwhile I got a brooder set up (I wasn't expecting ducklings

so nothing was ready.) The little one is still a bit shakey today but is eating on it's own though & I don't believe it's out of danger yet. It finally did poop, a big ol' thing, and I had to go out and tell DH. 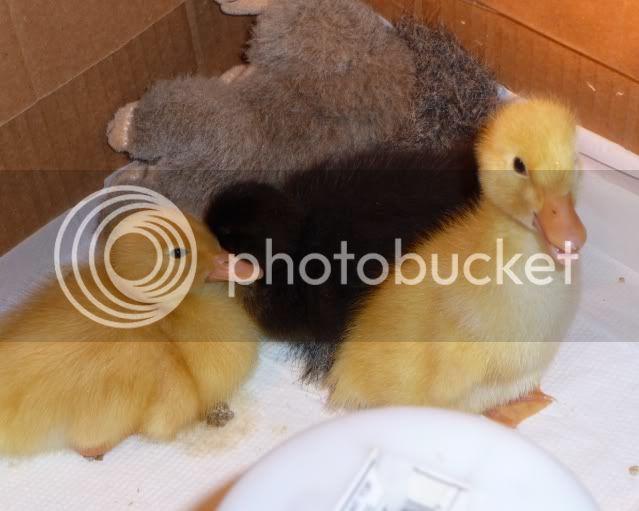 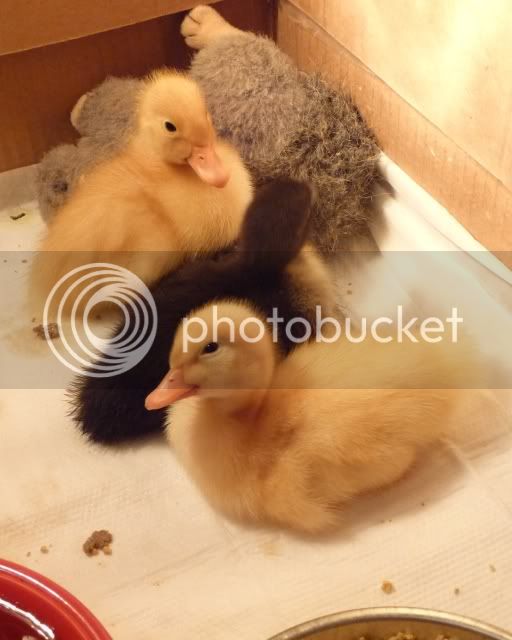 And last.... All four together. The little one up top. Poor baby!!!! The Pekins, esp. one, already let me pick them up and cuddle without much fuss. 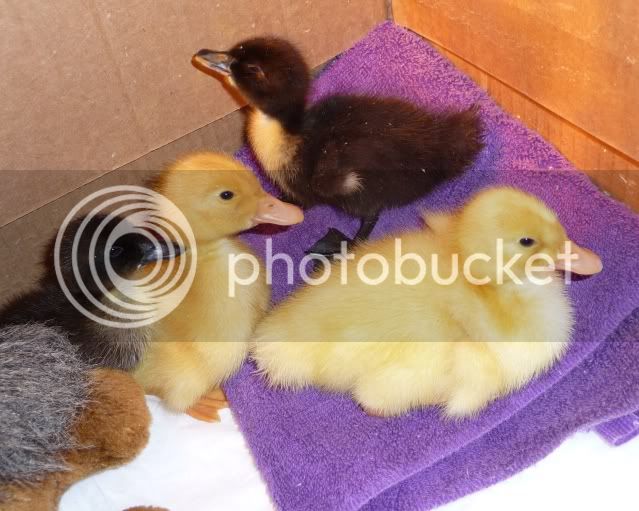 And good job to you and DH for saving that little duck!

I love 'em! I just love those ducklings! How sweet of you two to take the little one home.

I hope he does well for you.

What?! I just went to TSC and they had nothing at all!!!!! Thankfully, I will be going to Orchalens to pick up some ducklings tuesday.. I cant wait!
BTW: Cute little duckies!
Last edited: Mar 6, 2010

The little black and yellow one in the back of the picture looks like he's smiling.

So glad to hear the little one is doing better. Sometimes they do respond better when given just a little extra attention and in this case it really did work.


Love the purple towel...I always use a purple one in my brooder boxes for the first few days too...

They are so precious! I think it's wonderful that you took the sickly baby home to give it some special attention. I'm itching to go see if our local feed store has ducklings in yet, I'm soooo ready for some more ducklings.

N
What is good and bad duck behavior?