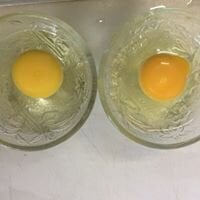 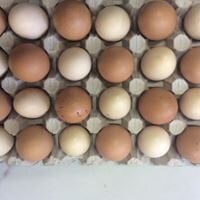 I have all sorts of breeds some dual purpose, some for laying, and some just for show. ALL their yolks are an orange color. Free range and healthy chickens tend to differ in color than the eggs that you find in the grocery store.

You can also taste a difference too. I prefer my eggs over most eggs.

You are making several different unrelated points.
As for the latter, which is the hue of the yolk, that is strictly dictated by the amount of carotenoids ingested by the hen. It doesn't mean one is nutritionally superior to the other. Cage layers don't have access to greenery so the yellow yolk color is completely derived from consuming yellow corn which is the primary ingredient in feed in this and many countries. Those yellow yolks from commercial hens are due to the carotenoids in yellow corn. In places like parts of Africa where the primary ingredient is white corn, the yolks are extremely pale or almost white. Those eggs are still equally nutritious.
Birds that are omnipresent throughout the world will by necessity, eat all sorts of things. The yolks of backyard and free range flocks in mild climates will be darker because they are able to ingest carotenoids from greenery and fruits.
So if you took a heritage breed hen and fed strictly layer feed that was perhaps corn free, they would have extremely light yolks. Alternatively, take a battery hen and put her in a free range flock situation with access to tender forbs and other carotene containing foodstuffs in season, she'll lay eggs with bright orange yolks
By broilers, I assume you are referring to Cornish Rock cross. They are different in their growth rate and location of the muscle on the carcass because they have been genetically selected for well over 100 years to produce the most meat, in the shortest amount of time with the lowest input of feed. They are developed for a different purpose than egg layers.
Egg hybrids, by contrast have been genetically selected for smaller size putting all their energy into egg production. The maximum egg production for feed input.
The impetus for that is the fact that only 2% of the global population is able to grow their own food and someone had to develop a way to feed the other 98% of people.
(my rant of human overpopulation will be saved for another conversation)
By 'backyard chickens' I think you are referring to the 200 plus breeds of heritage and newer chicken breeds that were developed for other purposes including dual purpose (eggs/meat) and ornamental.
Last edited: Jan 11, 2020
You must log in or register to reply here.
Share:
Reddit Pinterest Tumblr WhatsApp Email Link