Hatching saddled air sacs - upright vs. on side 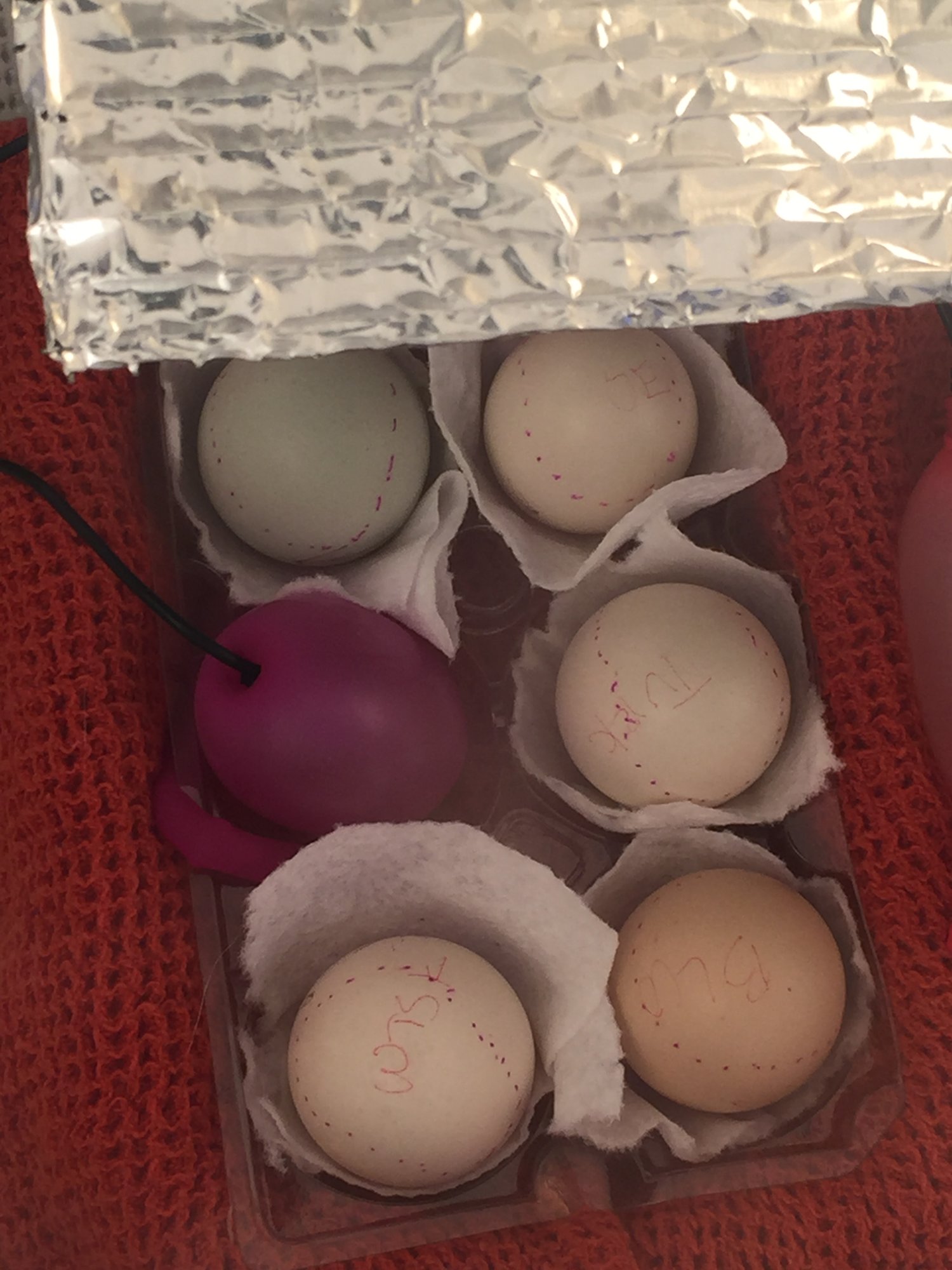 Q: Is it best to HATCH eggs with attached, though saddle shaped air sacs on their sides, or upright in egg cartons? Pros and cons of each?
I am on day 18 of incubating 5 bantam eggs. All eggs are thriving well, though 5/5 eggs have fairly severely shaped, though normal sized saddle shaped air sacs.
I have been sifting this site obsessively for days and just can’t seem to find a straight answer...
Upright, or on side for hatch when saddles are present?
I am currently on day 18 and am about to go into lockdown. No internal or external pips. I have them upright in a carton as of today, but am nurvously debating rather or not to quickly lay them on their sides, or have them upright in carton for lockdown and hatch. (I incubated them at a 45’ angle, large end up)

Lets get some experienced help ....

I lay them down on their sides with the lowest part of the saddle up. So far, I've never had any issues doing it that way

I also lay them down.

I try to see the air cell as it would be without the saddle. Sometimes the saddle may look huge, but is really just a small pull-away from inside the shell. I observed many eggs after the chick hatches, and the saddles can be much more deceivingly bad when candling than they really are.

Good luck with your hatch!

Thanks everyone! I have them on their sides now.

will keep you posted with how the hatch turns out!

@BantamAshley just wondering what the final outcome of your hatch was? I hope all went well. Would appreciate any updates you can give.

I am at day 16 with 12 eggs (shipped) - two are on their sides and have been that way the entire time - no problems. Ten had detached air cells and four of those are also saddled - VERY poor shipping on the part of USPS! They have been incubating in an upright slightly angled position with gentle quarter turns 3x's per day - watched a video on you tube.

The good news is, after candling yesterday, I have a total of 8 with attached or reattached air cells and I am seeing movement in at least 8 of the eggs, including some with air cells still detached!

Based on the information here, I will probably lay 3 of my saddled air cell eggs down and keep the 1 upright since I am still observing a detached air cell with liquid movement in that egg. I'll also lay down any of the eggs with reattached air cells, but will keep those three still detached in an upright position. So, 8 eggs hatching on sides, 4 hatching upright (one of those also saddled).

Now I'm reading up on how to assist if necessary. This is my first time hatching eggs that have been shipped and it's been a steep learning curve. Fingers crossed and hoping for the best as we near lockdown.

Thank you everyone for commenting here. I agree with BantamAshley... I have been frantically searching as well and there's is plenty of wonderful information on general hatching, but it's difficult to find a specific protocol for hatching eggs with detached / saddled air cells. What I have read seems to be from one end of the spectrum to another (e.g. turn eggs from day 1, turn after a day and a half, 2 days, 3 days, don't turn eggs for 7 days; put in a cardboard egg carton, never use a cardboard egg carton). I tried to assimilate what was available and made a choice that made sense for me. Hopefully, that will work. The proof will be in the hatch rate.

Got to go and read up on assisted hatchings now.... Thanks again!

@GlennLee I am also on day 16 with shipped eggs. 18 black copper Marans. All 18 were fertile and are still growing. I set mine as I regularly do, in a Brinsea Octagon 20, upright, in an automatic turner. Most reattached within 8-10 days and look great. Still have a couple with saddles.
Looks like we should be hatching together, so maybe @BantamAshley won't mind if we share here?

I realize the information here is all over the place with do's and don'ts. There are alot of variables with shipped eggs, so its hard to be specific. The post office is our biggest variable! Lol

Depending on how this set of mine goes, I may try writing an article. I'll take some extra pics this time around too.

This was my worst one, a few days ago. 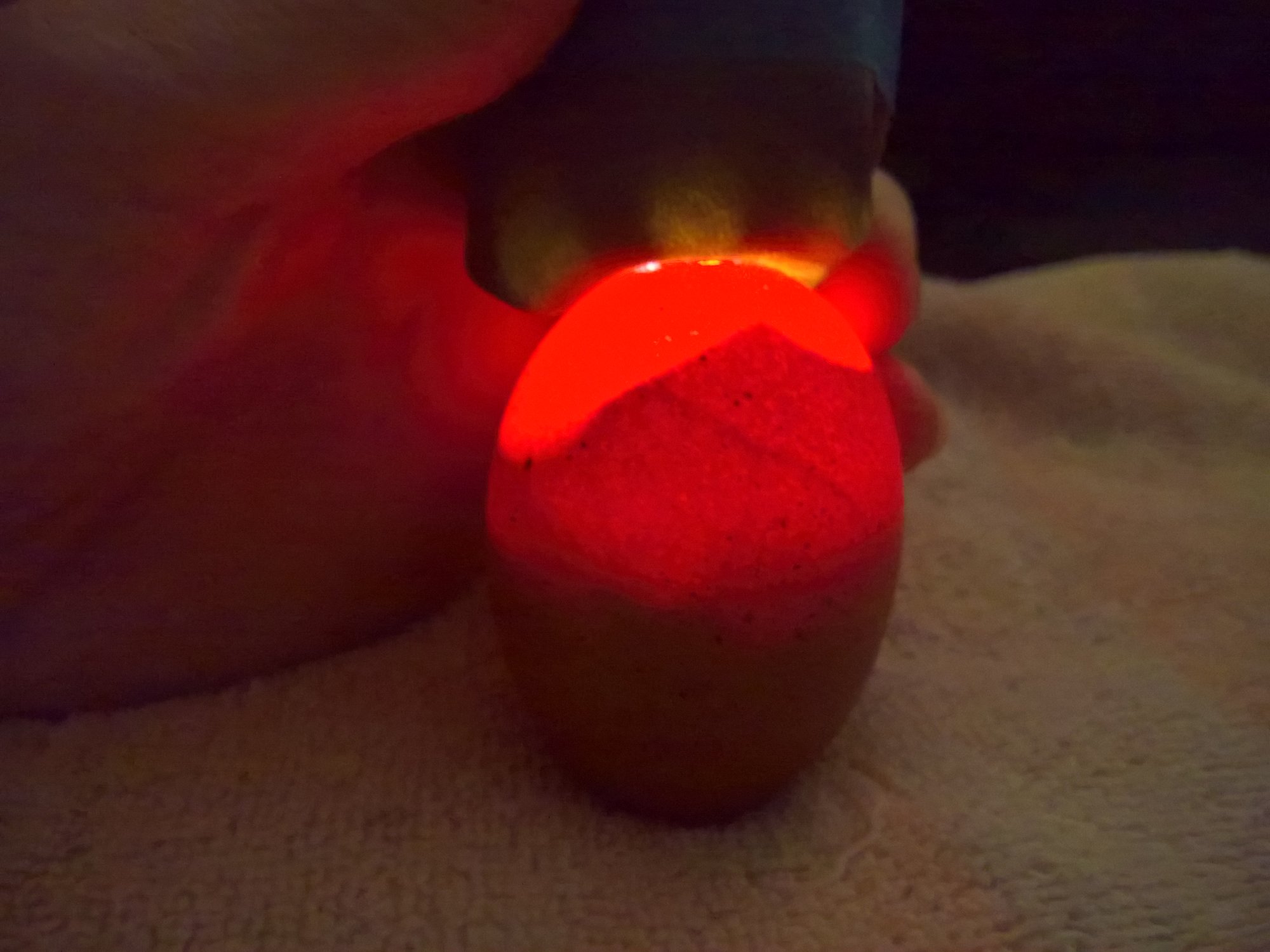 Thanks for hopping in here and for volunteering to write an article. That would be great. I understand that there are many variables with shipped eggs, but there are certainly some "general good practices" that would be beneficial to have all in one spot.

Love black copper Marans and hope to make that addition to my flock next year.

If I get this hatching shipped eggs thing down, I may start a new business and call it WHYSE - Will Hatch Your Shipped Eggs.

Good luck with your hatch and please keep posting here. We'll only reach the best practices by trying different methods, sharing what's working and what isn't, and retrying. I love to hatch and I love to observe, keep records and learn from others.

We'll be in touch! 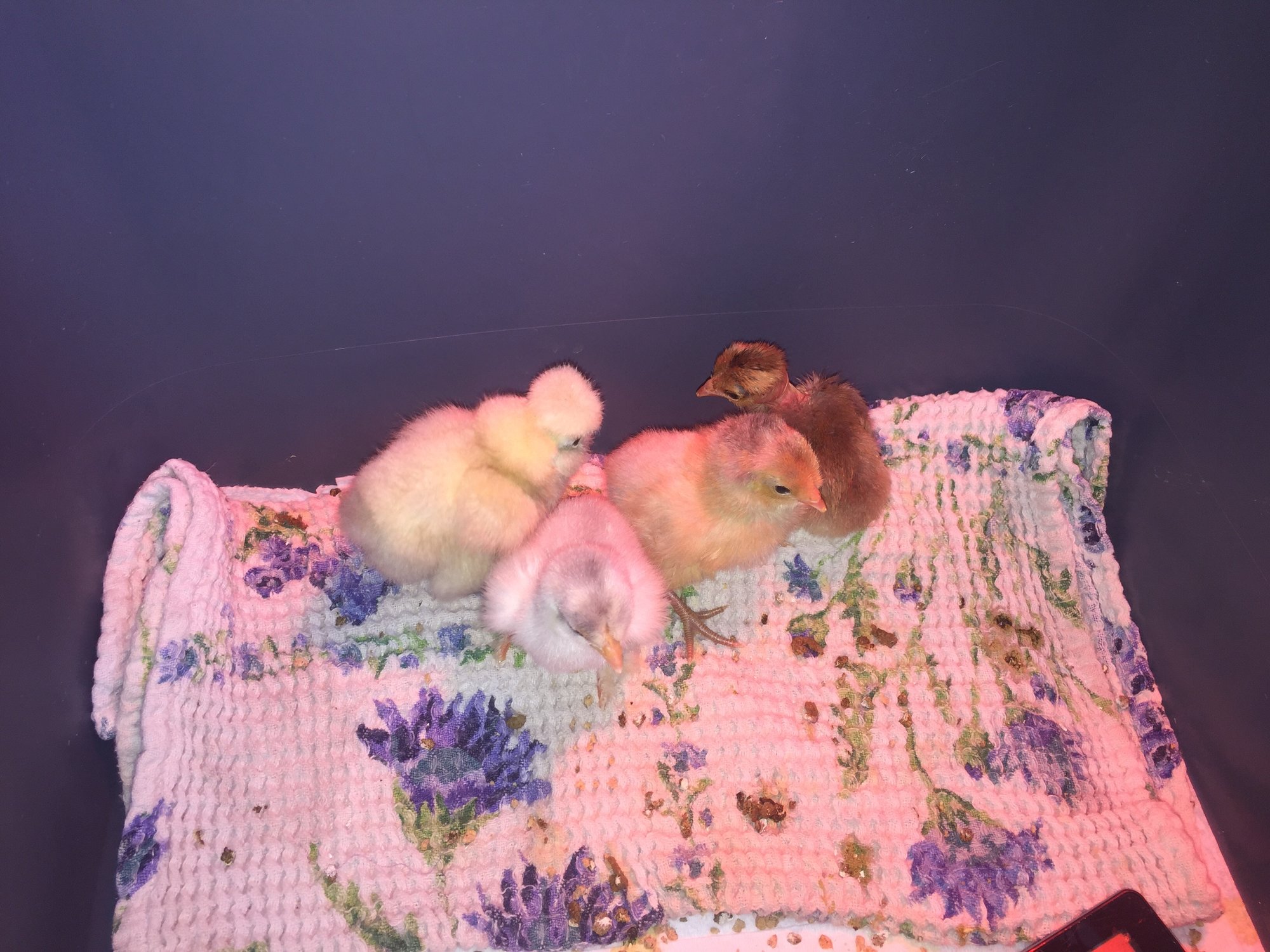 Hey there! I did end up laying them all on their side. Of the 5 total, one had died several days before lockdown, so I just took it out. But the remaining 4 with saddled air sacs hatched out beautifully on their sides. I was just sure to place the largest end of the air sac facing up.
I did end up having to minimally assist one of them. They had all internally pipped at the end of the 20th day, and three had externally pipped, zipped, and hatched by the begging of day 21.
The 4th egg had been internally pipped for about 20 hours, and upon candling it, I could see that it’s beak was frantically pecking, but unable to actually tap the egg. He also appeared to be breathing much heavier than the others had been by this point. I suspect that he was slightly malpositioned r/t the saddle. So I just made a tiny breathing hole using a steak knife to saw a little score, and then poked the score with a needle. My logic was to give him some oxygen, so that he could find the strength to reposition. I made the hole as close to his beak as possible.
He ended up hatching on the night of the 21st day. It took him longer to get on his feet than the others, as he was exauhsted, but I am glad that I enterveined, as he is thriving well now.
I don’t think that I would have tried to attempt more to help him. As veins were visable right up until the hatch.
One trick that I found to be priceless, was to heat some water on the stove, poor it in a cold pan (for steam) and then I took that pan over when I opened the incubator, while also draping a blanket entirely over myself, the steamy pan, and the incubator. This made the air under the blanket even more humid and warm than was inside the incubator, which allowed me to assist (and candle) more freely and timely. And actually boosted the humidity in the bator for a while. Personally, I think that The opportunity to keep closer tabs on them, being more high risk chicks, was invaluable to my sanity on hatch day, and this was a good way to do it.