Lockdown on what day? Does the hour matter?

First timer, using a cheapie Little Giant Still air, with no turner. Will turn them myself. Been trying to read up, and have found lots of info, but with the kids running around, starting their weekend, I'm not retaining much. So would love a quickie tutorial...including...

2) Lockdown on day what? Set at 9am, Lockdown at 9am on the correct day, or hour doesn't matter so much?

Any other tips you pro's can give me would really help! Thanks!

I was wondering something similar.

I would like them to hatch when the rest of my family is around. So would I need to set them late afternoon if that's when I'd like them to start hatching?

Remember, they're kids. So, if you're standing there with the camera, that will be all the insurance you need to make sure they don't hatch yet. They never do anything cute or adorable when you're ready and waiting for it.

And please go to Radio Shack and buy a $10 pc fan - if you don't have one laying around that you can scavenge - and hook it up to one of those outdated cell phone chargers you have cluttering up the joint! You'll be so much happier with the outcome!
Last edited by a moderator: Sep 2, 2011

the most certain thing is that all your eggs are not going to suddenly explode into fluffy chickens at zero hour on day 21.

Quote:
Ok, I actually have an old pc fan laying around, and a charger. I'm an elec-tard. What exactly are you telling me to do? How do I wire it? Where on the incubator would I put it?

And confirmation....lockdown means, what it sounds like? The incubator does not get opened at that point? Also, when do the chicks get removed? I read somewhere to remove them after 2 days...but that seems horrifyingly scary...couldn't they burn themselves on the heating element? Oh god, I'm gonna kill all my chicks!!!!

You worry as much as I do. I'm working on you a nice long answer - bear with me a minute. It just can't be done on the iPad.

the FIRST thing i would do is wire up the fan. if there isn't a place to screw it onto the top, i'd attach it to the side wall on the top half of the incubator. the fan should say what voltage it'll take, 12v or 5v usually. then find a compatible cell phone charger (it'll say what the output voltage/amperage is on the wall wart). you can go slightly less than the fan takeson voltage, but don't go higher, it'll smoke the fan. lower will just make the fan turn a bit slower (to a point, then the fan won't turn at all). the amperage should be the same or higher tho. if the amperage is too low on the power supply you'll smoke the power supply...

the fan has 2 wires, sometimes 3... positive and negative, and if there's a 3rd it's to let the motherboard know if the fan is turning... the charger should also have 2 wires, positive/negative. if you hook the wires up backwards, chances are nothing will happen. so then you switch. there are only so many options, so it's not critical. i suggest wire nuts on the splices, as i've had electrical tape come unwound at incubator temps... oh, and it probably goes without saying, but don't wire it while it's plugged in. LOL

once the air is circulating, make sure the thermometer is set where the eggs will be. the incubator is best left where there is little traffic, and the temps don't fluctuate much, and does not get any direct sunlight during the day.

Make sure that cell phone charger is a 12v. Take that charger and snip off the pluggy-into-the-cellphone end. Separate the wires about six inches, so you have plenty of room to work, and then strip about 1/2" of the cover off the ends of the wires. You can do this with a paring knife if you're not married to a mechanic and don't have thirteen sets of wire-strippers in your kitchen drawer like I do. Keep the knife nearby for threatening people who are making fun of you for doing this based on instructions from a stranger on the innertubes. Twisty-twisty the wires so they don't fray everywhere.

Take the pc fan and strip 1/2" of the cover off the ends of those two wires, too.

Get your victim - erm, no, helper. I meant helper. Get your helper to stand within reach with the two wires of the pc fan held out towards you, bare ends a-shining. Now, take that charger and carefully - oh, so carefully - hold the ends well apart and not touching anything but air while you plug it into the wall. Grin evilly at your victim - darnit, helper! - and motion them nearer. Touch the wires from the charger to the wires from the pc fan. Did the fan start running? Good! It didn't? Reverse the wires! Make a note of which direction the fan blows, and of which wires together make it work. Take the wires back away from the fan, and unplug the charger from the wall before you kill somebody. Monte Christo, what are you trying to do?

Now, fan placement. If you turn over the lid of the incubator, you'll see that white box that holds all the guts of the thermostat to one side, and the other side is blank. That blank bit? That's where you install the fan if you pay them $40 to upgrade to one. Pshaw! Fit your pc fan on there, and mark where the holes should go through the lid for your bolts. I used super-long bolts so that I would have room for a washer under the head of the screw, then the pc fan, then a big nut to make some space between the fan and the lid, then the lid, then a washer and a nut that actually holds the whole thing together. The pc fan blows TOWARD the lid of the incubator, not toward the eggs! This is why you paid attention to the direction of the fan blowing earlier.

I marked where the holes needed to be, then poked holes through the lid with an icepick for the bolts. The head of the bolt is to the inside of the bator, and the final nut is on top of the bator.

Put the fan in, then loosen the bolts that hold that white box in place. With that loosened, you can run the pc fan wires under that box and to where the original wires come out of the bator. Now, there's a black plug around that wire where it comes through the styrofoam. Push it out and open it up, and if the fan wires are long enough, then pull them on out through the hole and run them through that plug. If they're not long enough, then run the charger wires in, from the outside, instead. At any rate, get them into that plug, close that plug up again, and squeeze that plug back into the hole it came out of.

Now - you remember which wires needed to be connected? If you have buttplugs - oh, wait. Real people call them butt connectors, right. Anyway, now's the time for them, and you can use them to join the wires as needed. If you don't have butt ... erm ... well, you can just twist them together and wrap them in electrical tape, instead. Even if you do use the connectors, wrap that in tape, because sometimes they can be tricky for us non-professionals. But - twist the two wires together and wrap them. Then wrap the other two wires together. Then wrap all the wires together, making sure that there's tape in between the positive and negative wires so they don't cross and spark out. You don't want to kill anyone. I assume.

Plug it in and see what happens! Voila! Forced air incubation!

Are you measuring air temperature or water wiggler temperature? Are you planning to just lay the eggs on the wire and hand turn each individual one, and if so, is that where your thermometer is? Or were you planning to incubate them in an egg carton, tilting the carton - in which case, is your thermometer on that level? With still air, the air stratifies. You know heat rises, so the air at the top of the bator is hotter than the air at the bottom, and there can be a dramatic difference in just 1/2" of level. 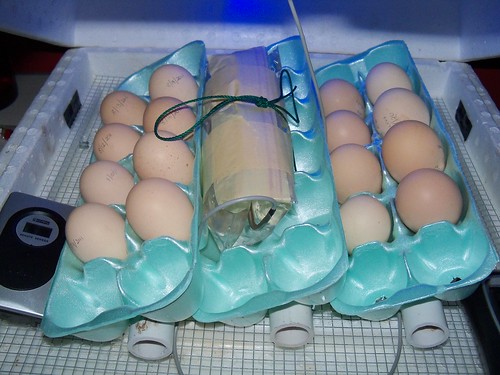 The egg cartons have holes cut in the bottoms of them, for drainage, just in case, and are hotglued to 12" pieces of 3/4" PVC. Just rock a dozen eggs at a time to the other direction. I can fit three cartons at a time into my LG, and turning is fast and easy.

Chickens don't wear watches. I turned at least three times a day, somewhat equally spaced, but sometimes was able to turn five times a day. Just - always turn an odd number of times, so that for the long (usually overnight) period, it's on opposite sides each day. Dry erase markers are great for keeping notes on that little window. There's even (shhh - don't tell anyone) threads on here where people did. not. turn. at. all. after eight days in the incubator. At all. Ever. And hatched babies. With no further turning. So - I'd say we can relax a bit on that.

Yes, lockdown means lockdown, and don't open it. You'll want a piece of aquarium airline tubing run down in there and one of those cajun flavor injectors without the needle to shoot extra water in to keep your humidity up. I have one of those steam cleaners, like for floors, and if I had to open for some extraordinary reason, I set it up shooting steam at the incubator, from far enough away to be able to hold my hand in the steam without burning it, while I opened it.

Your new chicks can survive for three days on the nutrition they've absorbed from the yolksac. They can survive ... but will they be happy? Who knows? I tried to leave them in as long as possible, so no one would be lonely hatching alone. However, I also had a brooder hot and ready for them, in case we took too long for everything hatchable to hatch. I did, eventually, put in a little tiny spice-jar lid of starter crumble and a tea-light votive (with four marbles in it) of water, and dipped their beaks in it, while I was waiting for the last one to hatch. But I'm a worrywort.

But, after you've wired this up? I'll have you wiring up a hatcher in a salvaged styrofoam fish-shipping box out of Petsmart's garbage bins in fifteen days, so you can go ahead and put the next batch of eggs in the bator!
Last edited by a moderator: Sep 2, 2011

Call Ducks - accidentally turned during lockdown, will they be alright?