Hello I am new to backyard chickens. I have five 28 week old chickens and 13 week old Polish chicken. My older chickens are americana chickens and Brahma chickens. I had them first and then I got the Polish chicken when she was about eight weeks old. The first week the bigger girls were bullying and Peking the Polish chicken as usual but it was nothing crazy. The next week they started all sleeping together in the coop and laying outside the coop I thought all was good. I walked out of the house two days ago and noticed she had a couple of feathers on top of her head pulled out or broken and she was bleeding I sprayed blu-kote on her head and hope that the chickens would stop picking at her. The next day I went out and she had more feathers pulled out a bigger bald spot and was bleeding again so I sprayed her whole head with blu- kote . Now I just went outside and she has a huge ball spot still bleeding her head is all blue bur they’re still packing out her I believe. I’ve never seen them actually packet at her I have only seen them chase her here and there but I have never actually seen it. Please help I feel so bad for her. They have a big area to run around in all day and my polish girl is normally alone. What do I do!! 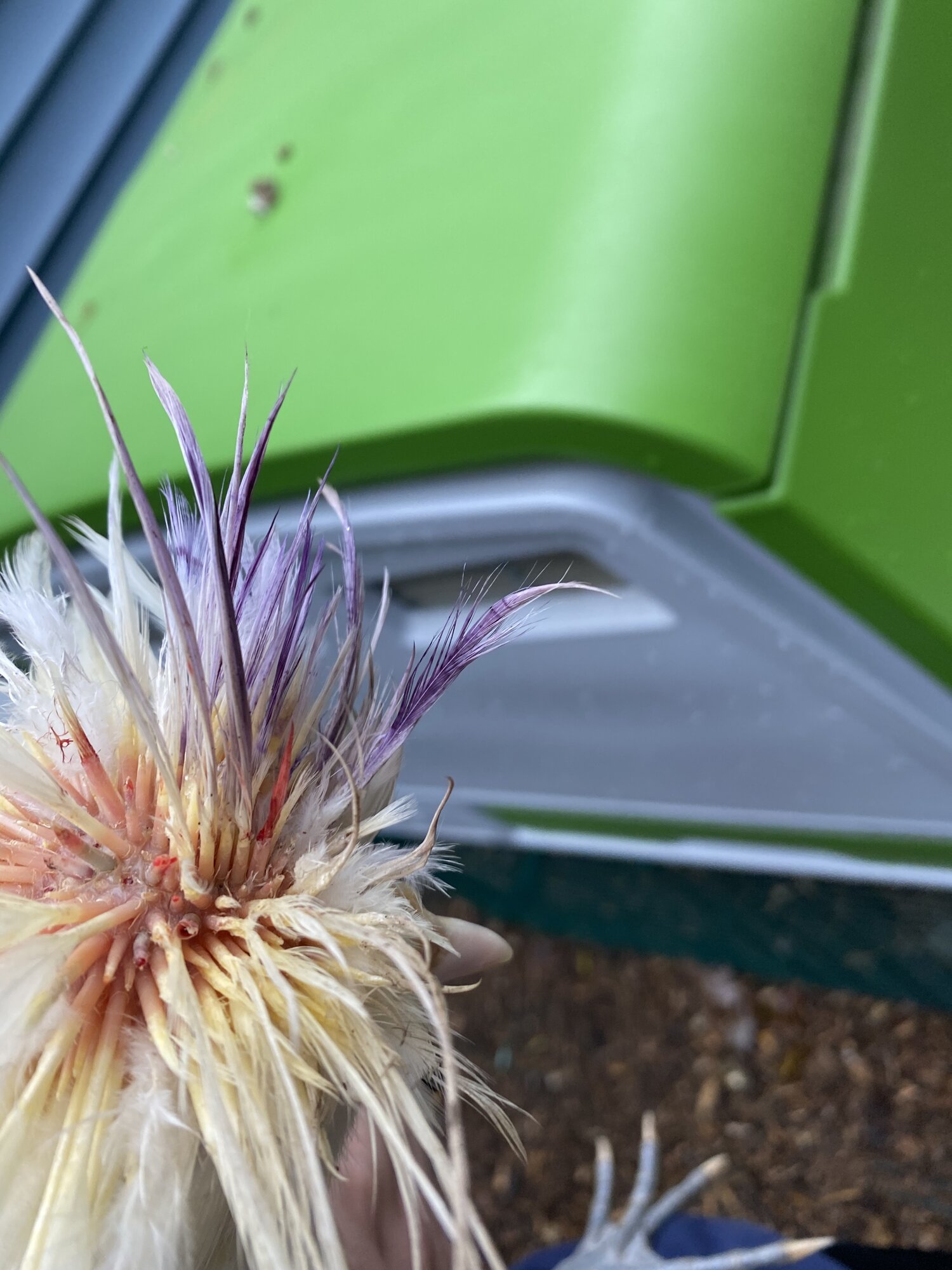 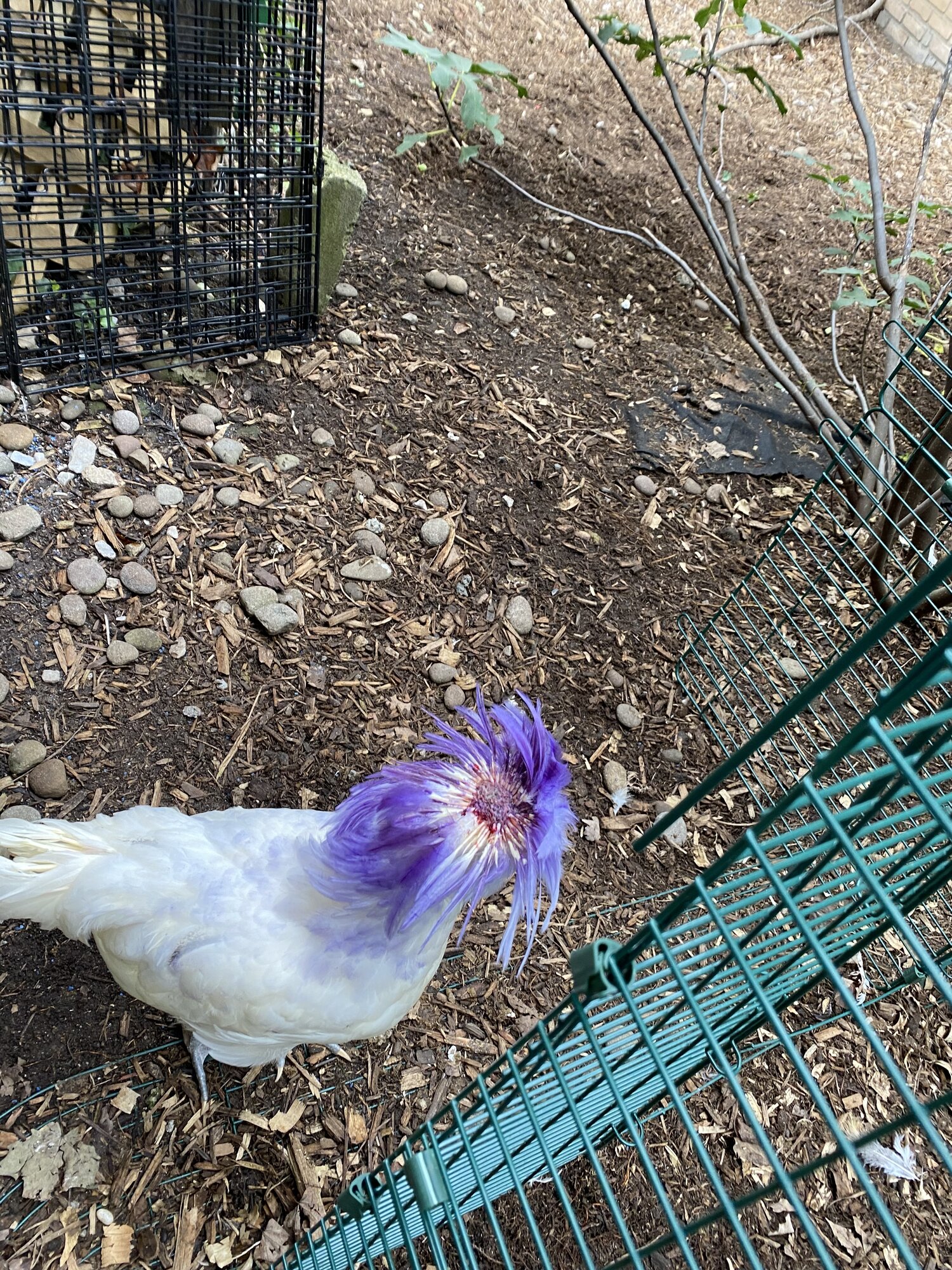 Do you have a spot to separate her? I would do that.

Sorry for the circumstances. Sadly, Polish are frequently targeted in mixed flocks - especially when their crest is filled with pin feathers as hers is. Until her crest regrows/matures she will very likely be targeted. It is most likely necessary to remove her from the flock, but then you will have the problem of reintegrating her.

This is what happened to my polish rooster. I made sure he had enough protein to grow back the feathers, and I gave him haircuts (more so, "feather-cuts"

)every so often, as well as separated him for a couple of weeks with his few favorite hens that don't bully him

For now you may want to separate her with food and water in a covered wire dog crate which is handy to have with chickens for keeping one separated or that is sick. I have had good luck with spraying BluKote on my 2 Polish hens in a mixed flock. But it had to be done when any pecking was first noticed. Since she is already bald, I would put some plain Neosporin ointment on it for a few days. The problem usually occurred 1-2 times a year, usually one or the other. Mine were all raised together as day old chicks though.

Because of pecking, I probably won’t get Polish chickens again. Hopefully, you can get this under control. Slowly let her back out when she is healing. It took about 3 weeks for feather ps to begin growing in, and if you don’t keep the blukote on then, they will yank out those new pin feathers. Once they are all grown back, you can stop the Blukote and watch for any pecking in the future. Spray at the first signs of pecking.
C

Thank you all! Should a dog cage be okay? The problem is they all sleep in the coop together and the problem doesn’t happen at night. I believe it happens when she’s trying to eat. I guess I’ll just have to wake up early and put her in the cage and do the same at night but put her in the coop. Thank you all! I worry about my little girl she stole my heart with her crazy hair!

Do you have any other polish chickens? If not, 2 might be better than 1. I have 2 and they do stick together. Also, do you have multiple feeders set up? That might help as well as they can't possibly be at all the feeders at once.
What about trying peck no more? I've heard that its messy, but that hens don't like it so they will quit pecking. I believe it's made with pine tar. But, with bleeding pin feathers, I would definitely try neosporin first to heal any injuries.
Last edited: Oct 6, 2021

After you've put the ointment on the sore bits, get a rubber band and tie up her crest in a ponytail. It will hide the bald patch and protect it because the feathers will all be bunched together. Leave it like that for at least a week or two.

Long term, you need to either rehome her or create a separate miniflock and get her some similar friends.

I would also try getting her another polish friend.
And the pony tail is a great idea. I've done that to my polish hen and rooster and the pecking stopped. I also did this so that she could stay with the main flock while healing her wounds.