What was that one bird that got you hooked?

Hello everyone!
Yesterday evening I was just thinking back a few years about all the poultry I've owned, and how they impacted my life. Then I got to remembering my very first one - the one that got me hooked on poultry! So what was the one that got you hooked? It can be any type of bird discussed on this forum! Whether it's a duck, chicken, goose, turkey, etc! Tell us a little about them and how they impacted your life! Include a photo if you can!

I'll go first as an example!
Back when I was 5 years old, my best friend at the time had some ducks on their farm. Eventually they hatched out some ducklings, and I was given one! I want to say they were Khaki Campbell mix. I know the dad was a Khaki, but I can't remember the mother. Anyways, I named my new little duckling Quackers. As time went on she quickly grew attached to me, and I to her! Even as an adult, she would follow me absolutely everywhere she could. My dad had a sawmill on the property at the time, and he had these giant piles of logs that I would climb around on, and she would follow me up them too. Every morning I'd wake up bright and early and take her out to get her some bugs! I'd lift up stuff around the yard for her to get her treats. I spent most of my free time with her, and I don't think I could have spent my free time in a better way. When I came home from school, she would run over to me and be all happy to see me. I always looked forward to seeing her every day. She was my best friend!
I hate to talk about it, but eventually I ended up accidentally killing her when I lifted up an object in the yard that was far too heavy for my little child arms to keep up, and ended up accidentally dropping it on her...In truth I still haven't gotten over that. And I just kind of imagine what other wonderful memories I would have had with her if I had been smarter and not tried lifting something so heavy just for her to get a few bugs. We buried her in the yard, right in front of our catalpa tree that is still there to this day. I'll put some flowers on her grave every week in the summer. I still miss her, even 20 years later. I kept a feather from her that I still have to this day too. But, I know her memory is worth more than just sadness. Though I'll never have another duck like that again, I'm thankful I got to have her in my life, and that she taught me how wonderful and loving a duck can be! She led me to having so many other wonderful birds throughout my life, and I'm truly grateful for that.

Here's an old photo of little me with my Quackers! 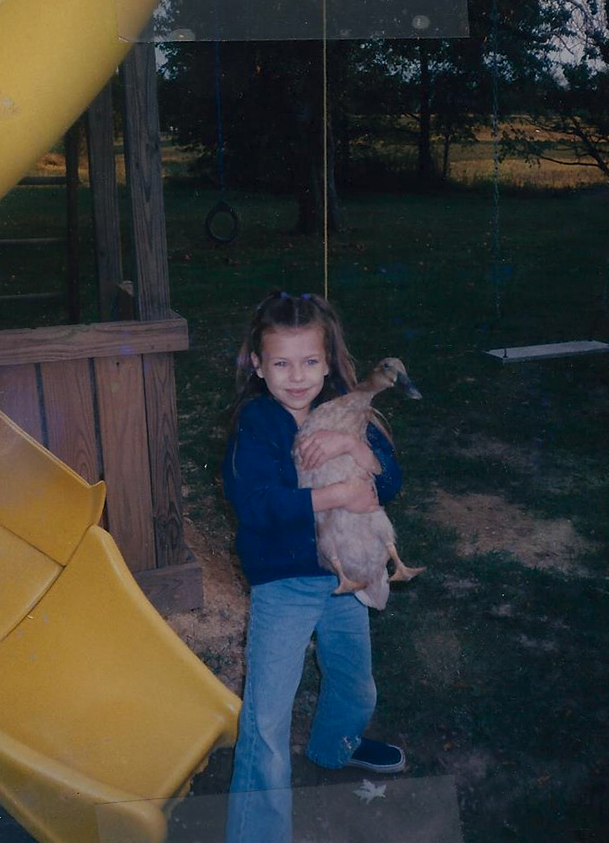 Now it's your turn! Let's hear the story of the one that got you hooked!

When I was 3 my family moved to Winona lake Indiana. I know this is bad but we used to feed the local ducks bread. We didn’t know it was bad for them and I deeply regret it so pls no hate! Anyway after me and my dad found a duck that was hit by a car we took it home and called severl vets. While my dad was calling I was bonding with the little guy and trying to make him happy. We ended up saving his little life!

That picture is the cutest!

I don't remember. I was a very lonely child, my mother didn't want me and my father didn't notice and was working a lot.

We had a lot of nature around us and a really big pond.
I was not allowed to play with other children, since their parents didn't want their children to play with me because of my parents.

I just wandered alone. I don't remember when I started to like birds. Or Mice. Or toads. Or frogs. Or fish. Or catterpillars. Anything alone with me.

I think the first time; around age 5, I found a dead mice. I had never seen anything dead. I thought about how lonely it must have been for this mice, noone caring about him. I was imprinting my life on this mice. I burried it in a cigarbox I stole from my grandfather, with flowers and tears and all. This poor mouse. Died, an noone even noticed. All left alone. I hated his mouse-family.
Next to mice I also found dead birds. And I buried them.
My grandfather, having a lot of birds, seem to notice that I had genuine interest in his birds by the way I looked at them. He had pidgeons, tiny exotic birds, quails, chickens.. it was his passion and life but everyone said it was an ' stupid old man hobby'. His wife and children and grandchildren.
Allthough I was not allowed to do much with him, like fishing, football, and things that were for boys, he secretly gave me a present. He could not give me a present since I was a girl. He said 'Oh, I have this old rubbisch book I have no interest in, maybe your girl can, fan herself with it when she puts on make-up'. to my parents.
It was a book with every bird in the Netherlands, in fan-form. EVERY BIRD.

I started to spot them all. Since living at a big pond, spotting water birds, I also met fishing men that thought me about different kinds of fish. At 8 I saw a really weird blackbird. It was pied. Pied like a bad-pied black Indian runner duck I never heard of by then. I had gotten over the years 7 dollars from my grand-parents. This was enough to buy this camera that you use one time and then develope. I was SURE I had discovered an unique kind of bird. The whole day I lay in the ground in the hope that this pied-black bird came back. It did. I snapped pictures. I never had snapped pictures. They all came out dark, and the ones with the bird in it, the bird was too far away to see that it is was special. :'(
I thought that maybe if I had proof of something special my parents would like me... but I didn't have the proof :'(
I don't have the pictures anymore because they remind me of a sad childhood. I threw them away a few years later when I learned this was not an unique special-never-discovered bird..but just a different bird, that didn't asked to be different, like me.

Wonderfull things happend. I saw a stork right fly above me! Birds in the Netherlands are tiny. So this stork looked majestic and unreal! Just above my head! And for years they stopped comming here! I told my mom, she said I dreamt it. She still lives there and tells me how proud she is that the stork finally returned..
I saw a really unique catterpillar. Massive. Bigger then any other catterpillar I had seen before (and I had seen many, whole nests that now don't excist anymore). This one was as long as my finger, black with bright green, and again; I dreamt it. I now know I saw the catterpillar of the papillio machion, a quite rare, way bigger butterfly then usual here.

It continued on.
We moved to a new place for my fathers job. There was no nature and no big pond. I still was unwanted, and had to stay in my room. There were no people here that we knew, so no children that knew me and asked at my mom if I wanted to play with them, and no parents that knew my parents or that I excisted. We had a yard behind our house. My room had a vieuw on that yard. And after a few years I could tell all the birds apart, the black birds, the robins, jay's, magpies, collared dove's, woodpidgeons, I gave them names, saw them mate, have children, named that children, saw them fly out, was wondering who returned next year, saw some of their children never return but some of them do and start their own family.. they were my family and connection to the outside world.

I think it is no wonder why I have birds now. I have recently stopped ties with my family. I am hoping to have a new one, one day. Meet someone like my grandfather. And that he/she can be a parent/friend to me. My partner does not have parents. And in the meantime I like birds to fill that emptiness up. The few in my house or go for a walk and get really involved in the free-living birds around me. And I hope to see a pied blackbird again. And If I never do; I will draw it on my funeral-invitation.
Last edited: Dec 10, 2018

Help! My ducks got attacked by a hawk!
2

A moment with a Chicken and a Goose