Its early for us to be seeing this. Usually it's into January I wonder if the mild weather we've had off an on is doing it. We were very warm way up into November too.

Well hopefully I get some sort of warning before that switch flips. He was a bit murderous last year and I have some really nice breeding age Orpingtons and some good-looking started birds growing up with them. Weather plus finances have kept me from starting the barn project in earnest that would move all the Orpingtons into breeding pens leaving the geese alone in the current pen with access to the yard for grazing.

You don’t want your Orps or other poultry closed up with hormonal geese. Mine have half acre fenced an my chickens an ducks can stay clear of them I could never have my gander closed in a pen with them. 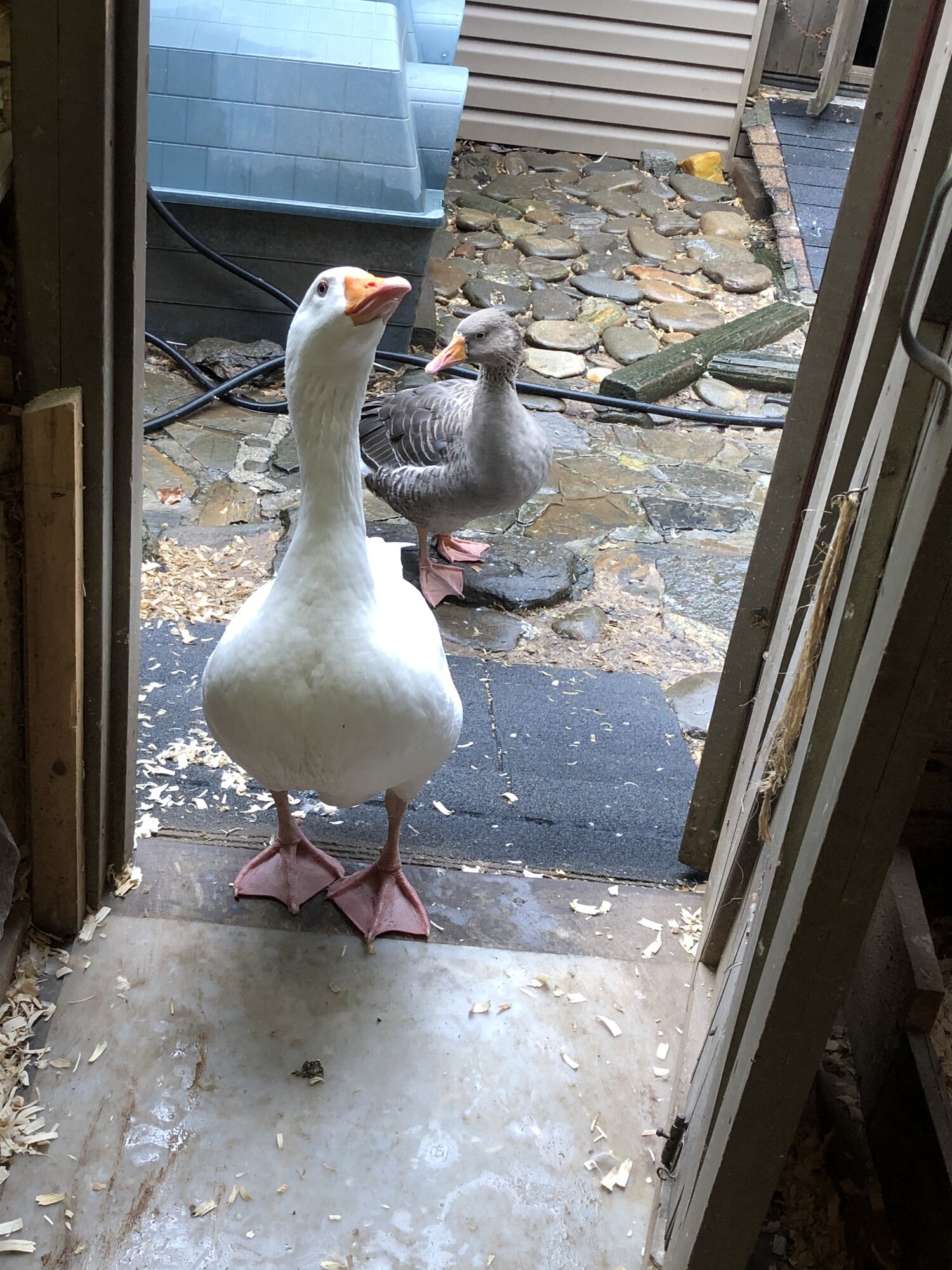 He’s not in his biting stage yet thank goodness! And he’s Embden so he is pretty hateful compared to other breeds maybe?

Miss Lydia said:
You don’t want your Orps or other poultry closed up with hormonal geese.
Click to expand...

That's for sure. He definitely killed two three month-old Silver-laced Orpingtons while Georgia was incubating this last Spring. He grabbed them by the head and basically crushed their heads. He also severely wounded Duchess by trapping her in a corner and literally just chewing on her face. Her face was swollen so badly she couldn't open her eyes for weeks. I wanted to just throttle him. Strangely enough, he never bothered Sterling.


Miss Lydia said:
Mine have half acre fenced an my chickens an ducks can stay clear of them I could never have my gander closed in a pen with them.
Click to expand...

When the pen is open and they have access to the full yard I don't worry about them too much. But I really want to have the chickens (and turkey) out of the original pen by February. I'd wanted it done back in October, but I'm also not quite handy enough to do it all by myself.


Miss Lydia said:
And he’s Embden so he is pretty hateful compared to other breeds maybe?
Click to expand...

Are they more hateful? Mine are American Buff and while they were both sweet with me, the lengths they went to to torment everyone else all breeding season was why he ended up in solitary confinement. After he killed the young birds (which I didn't see but now recognize his distinct methods) and nearly killing Duchess I moved him into a trampoline frame wrapped with wire. He was inside the fenced in back yard and I could move the smaller pen to fresh grass every few days. Georgia stayed on the nest 99.5% of the time so she wasn't a problem. The rest of the time she's certainly an instigator. Although she's terrified of the turkey.

Supposedly the Embdens are rated one of the meanest. I understand protection and hormone craizyness but killing another bird just isn’t right. I know my gander and drake would injure each other if left to fight it out. My drake being smaller always get the best of Sam the gander. I think my drake enjoys a good fight. Right now though he’s staying out of Sam the ganders way. Sam doesn’t actually go after any of the other birds besides the drake he just lowers his bed and walks towards them they have read his body language an high tale it.

Miss Lydia said:
Sam doesn’t actually go after any of the other birds besides the drake he just lowers his bed and walks towards them they have read his body language an high tale it.
Click to expand...

Yeah, that's the normal behavior now. He either raises his head and holds it against his neck and trembles or he'll snake his head out. Usually he just has to walk in the other bird's direction and they move. Maybe it was because the other birds had never been around him and didn't know how to read his body language so it escalated. But watching them give new additions the run for their money always makes me think he just enjoys being obnoxious.

I have some new pics for you! Weather has been warm enough for the birds to get a good bath which Chance is thoroughly enjoying!! 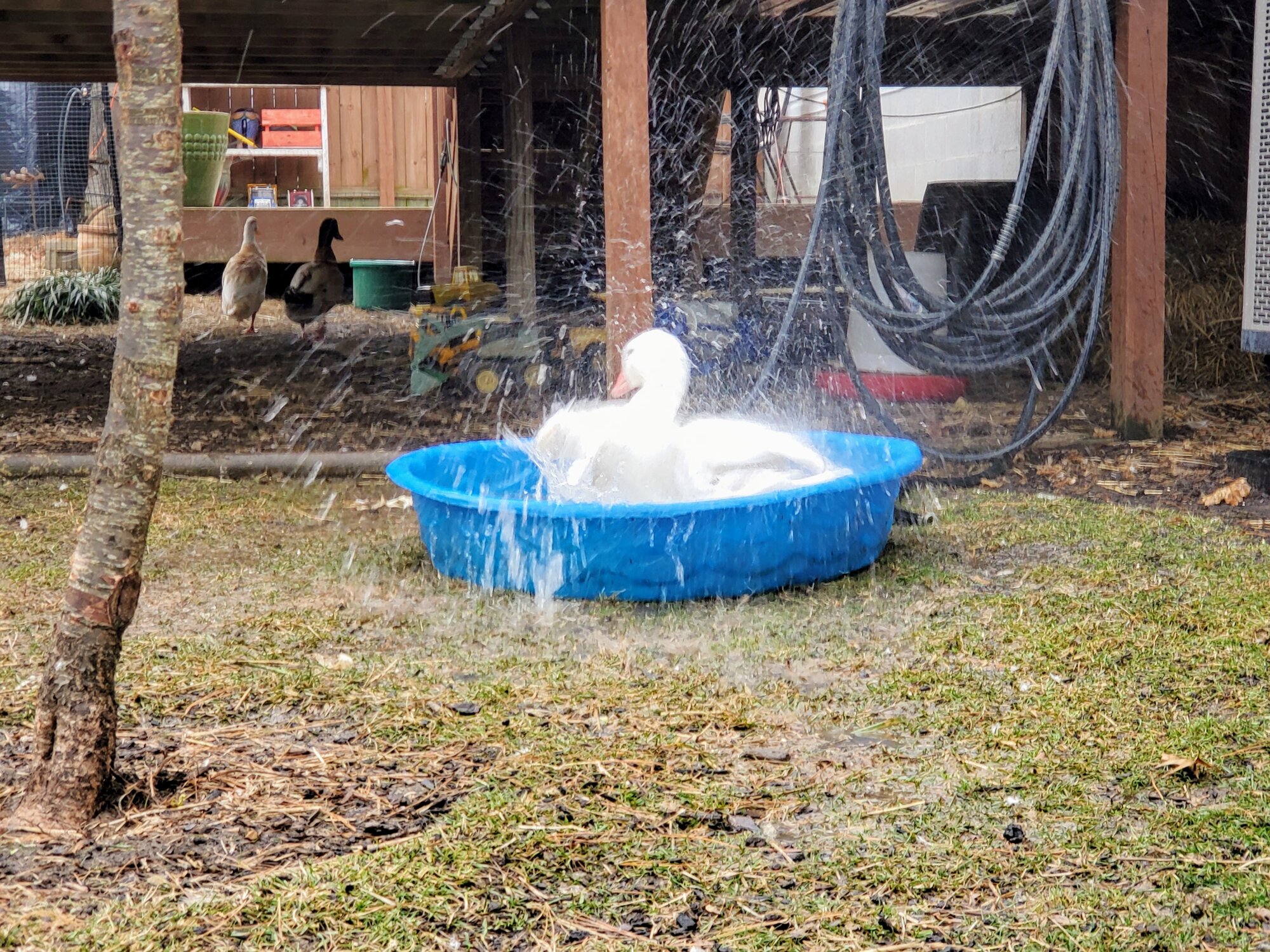 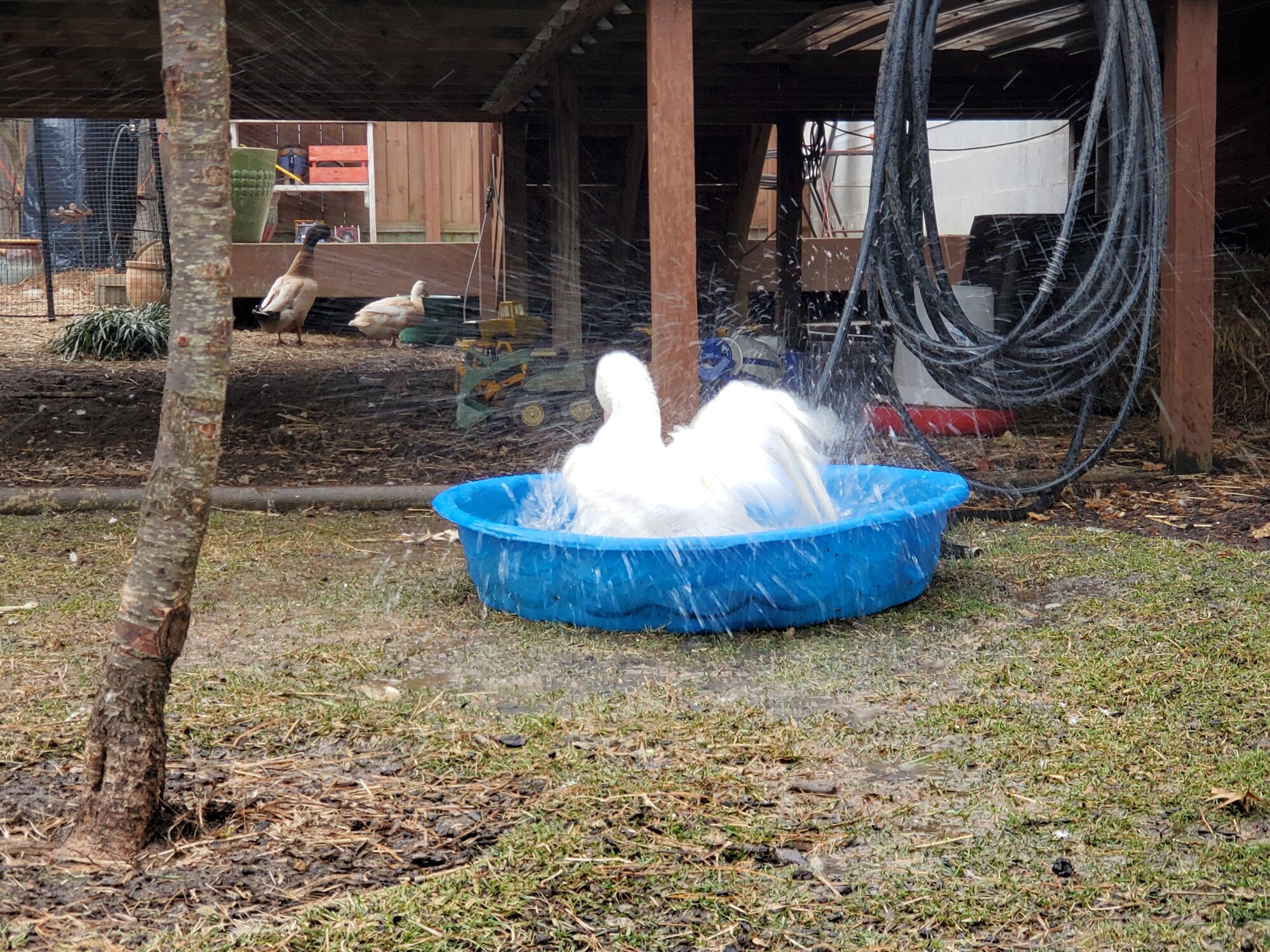 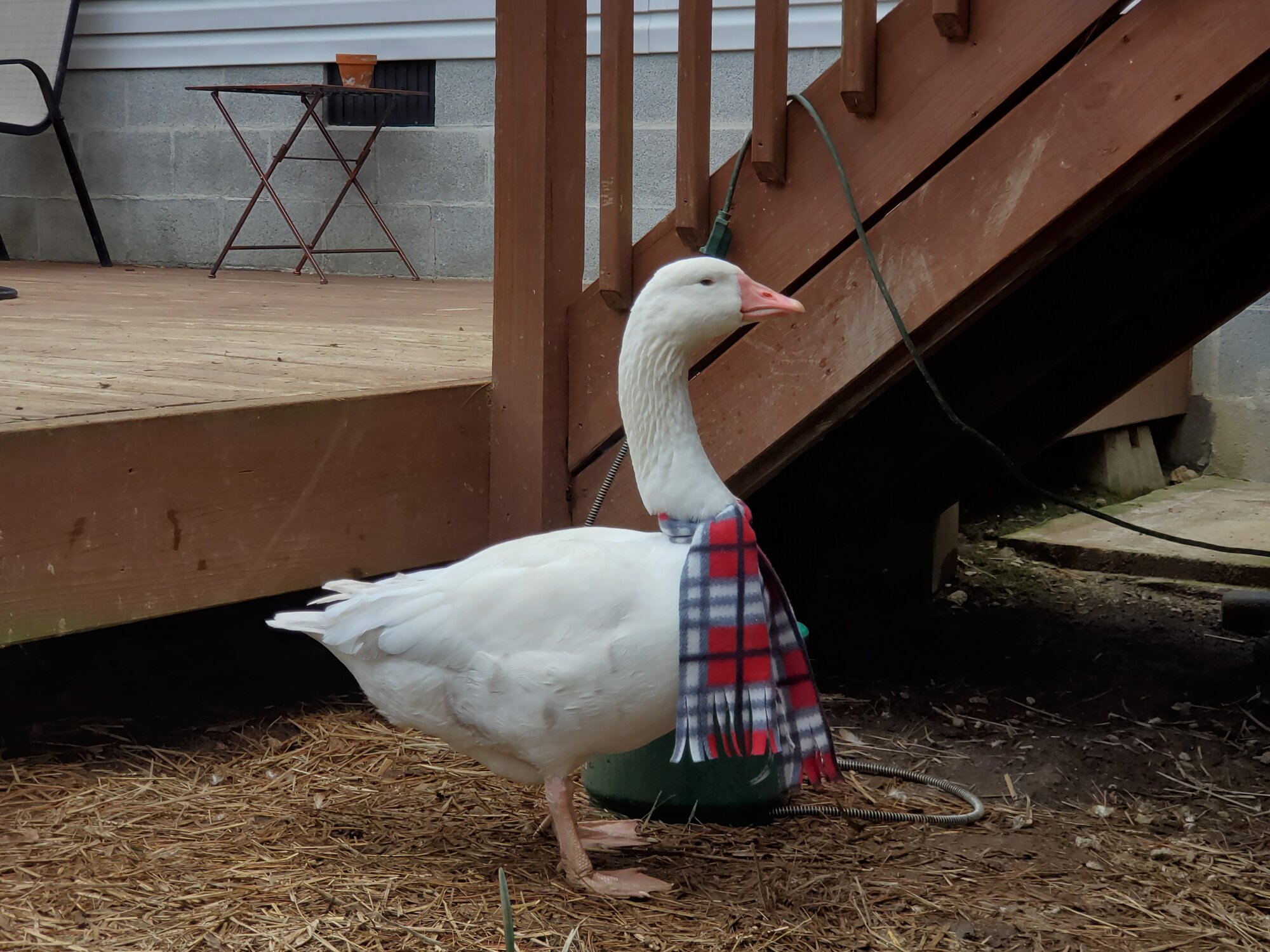 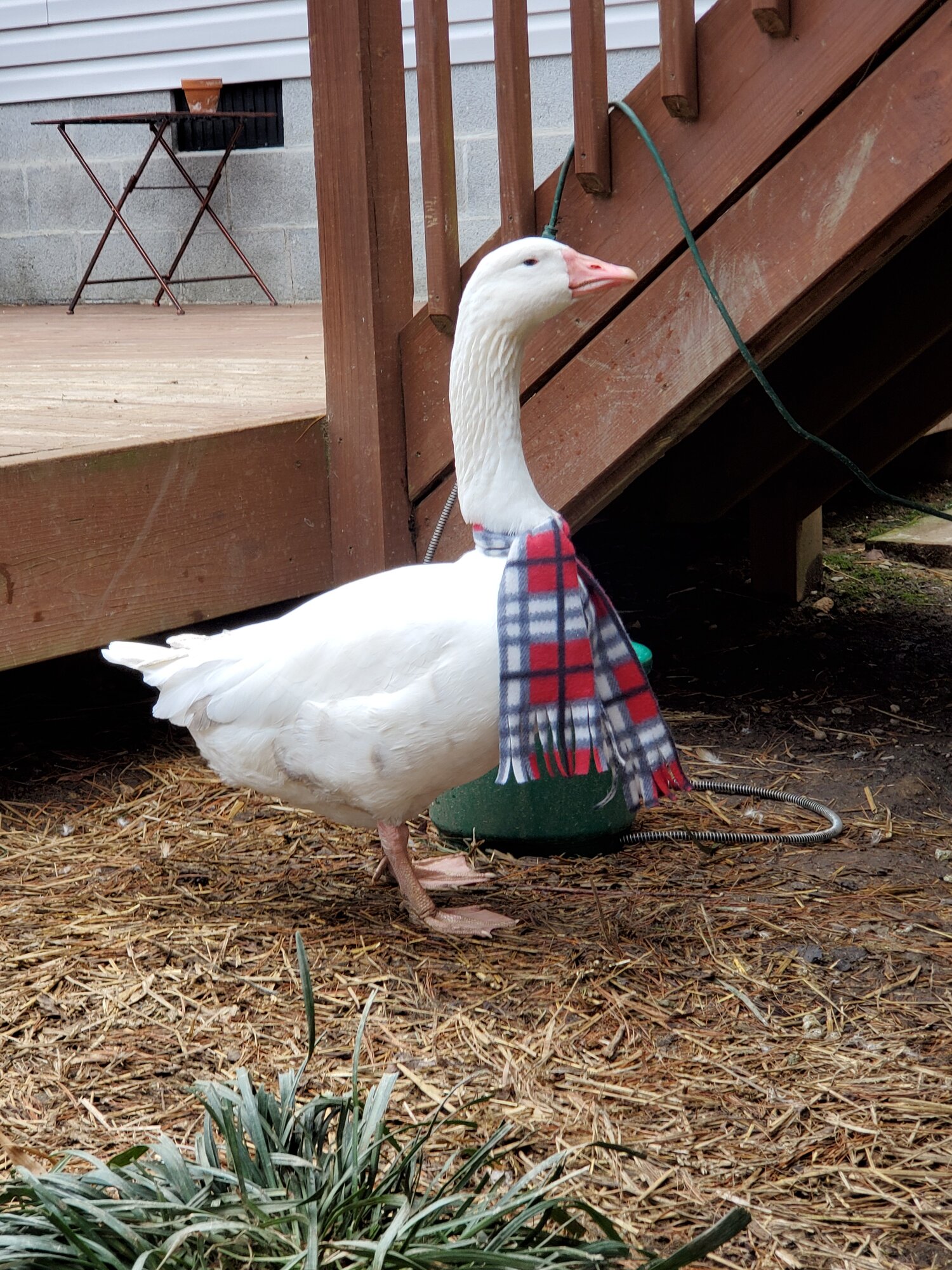 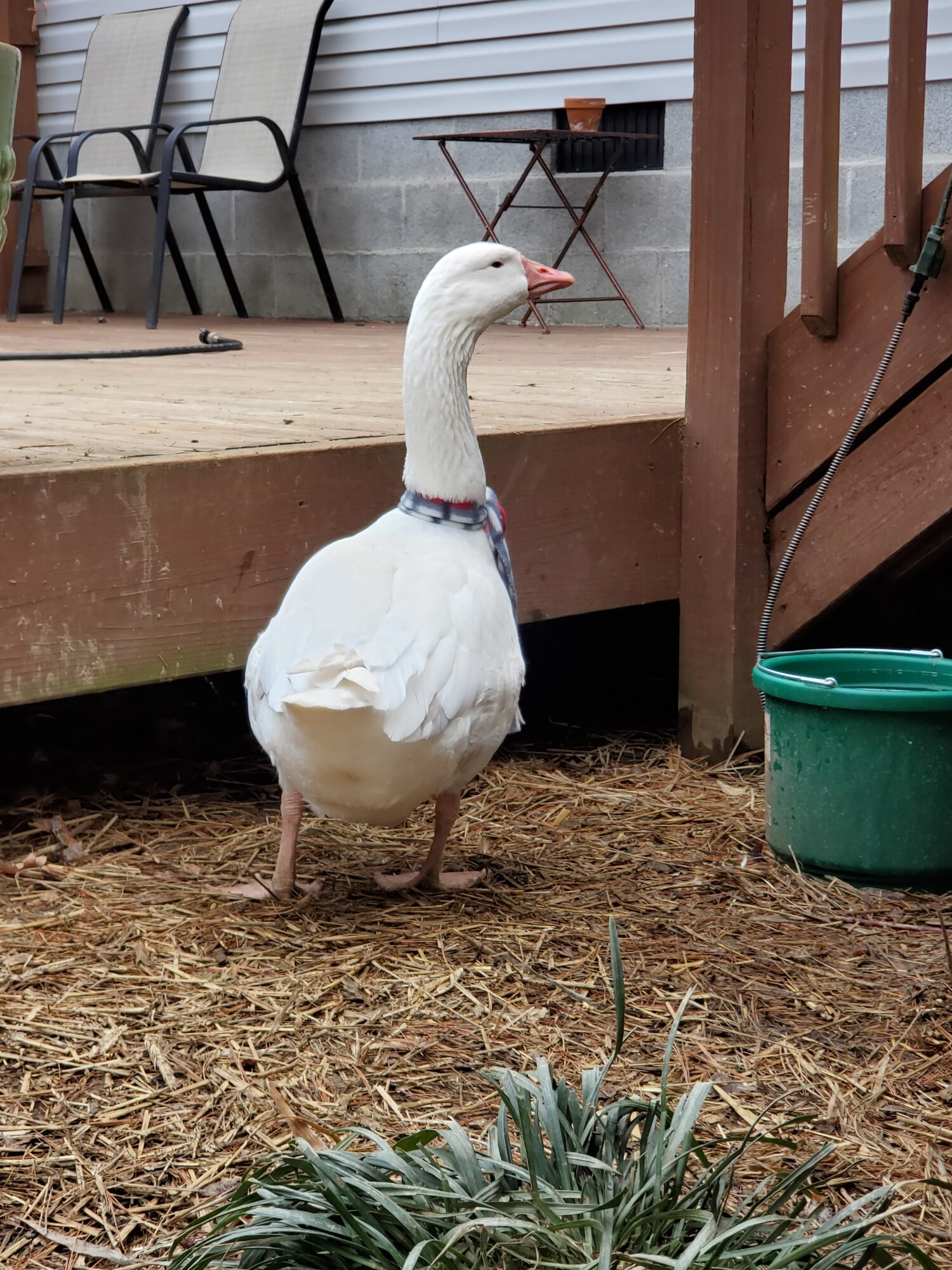 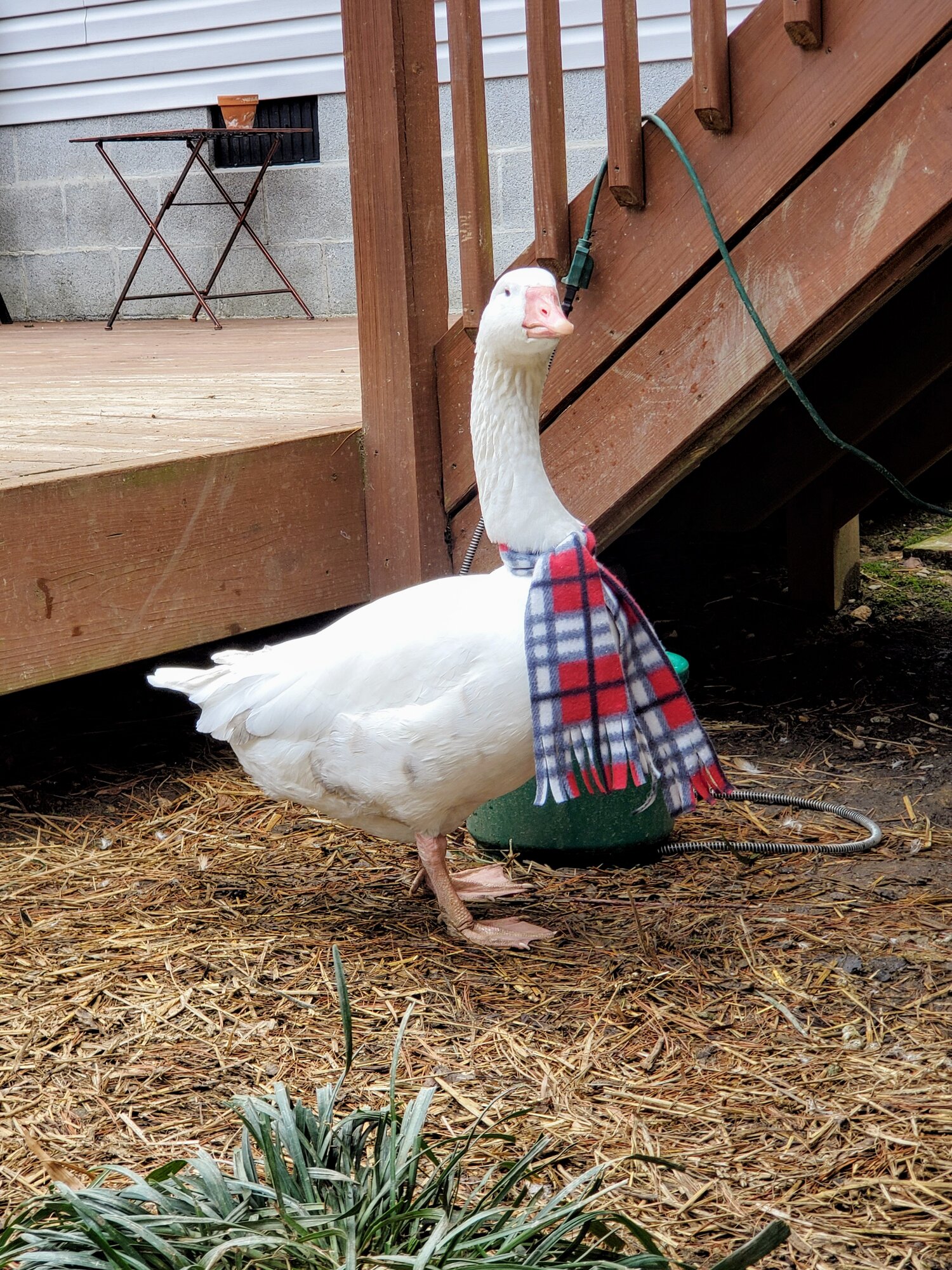 Chance has really grown into a beautiful gander. Love his scarf, just don’t give him a cigar an slippers if he asks for them