The other week my cousin contacted us saying that his buddy was getting rid of his ducks and wondered if we would take them. We've had so many ducks over the years, and love them, so we said yes! Though they never said what breed the ducks were or anything. So I was curious as to what they were.
Today they came here to deliver the ducks. The guy said he was re-homing them because they were too messy and they were kept in with his chickens and kept mucking up the water so fast. Then he goes on to say that he would have just had them for dinner sometime if he didn't find a home for them soon, so he was happy we were taking them. They originally got them as ducklings along with some chicks back in spring, so they're still relatively young yet, which is nice. They were hand raised as well, so they're not really super skittish. I expect they'll become friendlier as they get used to their new environment. We put them in the enclosure and he took a few pictures of them to show his daughters, and thanked us before he left.

They're being kept in our outdoor enclosure (about an acre large) along with the chickens. We'll temporarily be keeping them in the chicken coop at night till we finish building the duck coop. My geese haven't been introduced to them yet, as I didn't want them adding to the ducks' stress today, and I wanted them to get used to their new home a little before that. I'll probably be introducing them tomorrow and see how it goes. I don't think there will be any real issues moving forward, but I'll keep a close eye on them just in case.

They're both drakes for sure, and I'm thinking they're Pekin, but they honestly seem sort of small to be Pekin. I had a Pekin before and she was much larger than these two boys, but it's been a few years now, so maybe it's just me being forgetful? lol It's almost like they're halfway between Call duck and Pekin size. 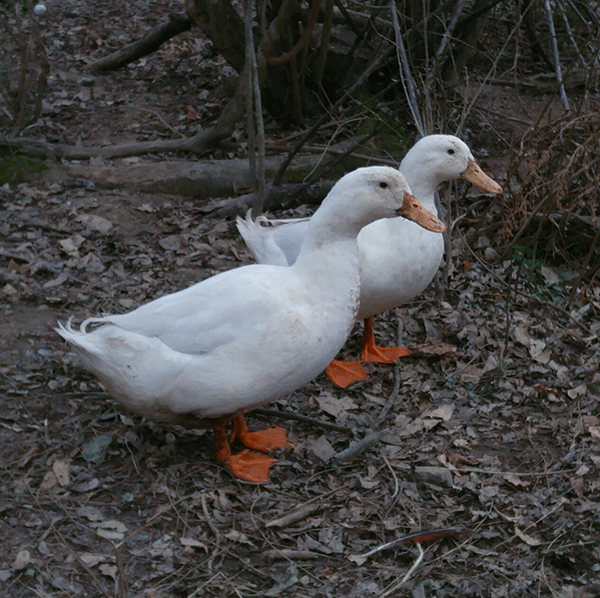 Excuse their dirty appearance; they were mucking around in the mud before I took this picture lol. But anyways, I'm very happy with my new boys and I think they'll be very happy here! My avian army grows!

Cute! Pekins can vary depending on source, so they could be that breed, or maybe Pekin crossed with a smaller breed. I can't think of many smaller white breeds of ducks besides call ducks, but they are too big for that. White mallard is another possibility although I am unfamiliar with them.

Adorable!
Lookie’ how orange their feet are!

It's possible they are Metzer's "white layer" hybrids. I believe they are a bit smaller and squatter than pekins.

It's also possible your last pekin was a "jumbo" pekin and these guys are regulars.

Could they be white layers? Or you could've had jumbo Pekins and these are normal Pekins. Either way, congrats on the duckies!

Sure are cute boys!! Congrats!

Likely you had a jumbo Pekin and these are normal sized or they’re Metzers farm white layer hybrids!!

Thanks everyone! I never really thought about my original Pekin girl being a jumbo. I just assumed she was a standard size Pekin. But compared with these boys, I'd say for sure she was indeed a jumbo. It all makes sense now!

Did they get introduced to the geese yet?

They are so handsome! Congratulations!!!

Introducing new females when there is a Drake