My Rooster is obviously ill...

I got up this morning and went to check on my flock and Mr. President was not with his girls. I found him in the coop. He's not able to balance. Almost like he's drunk. 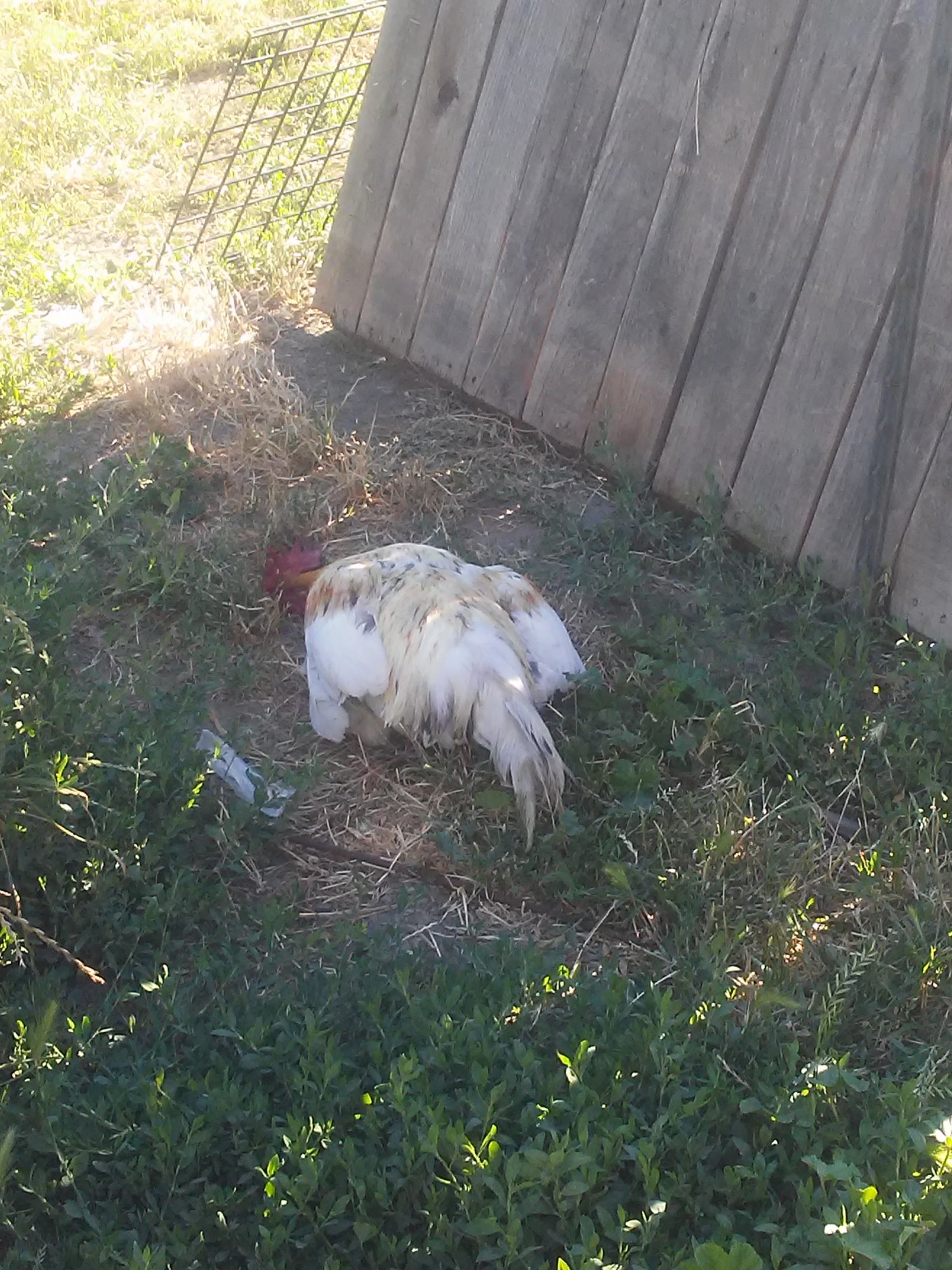 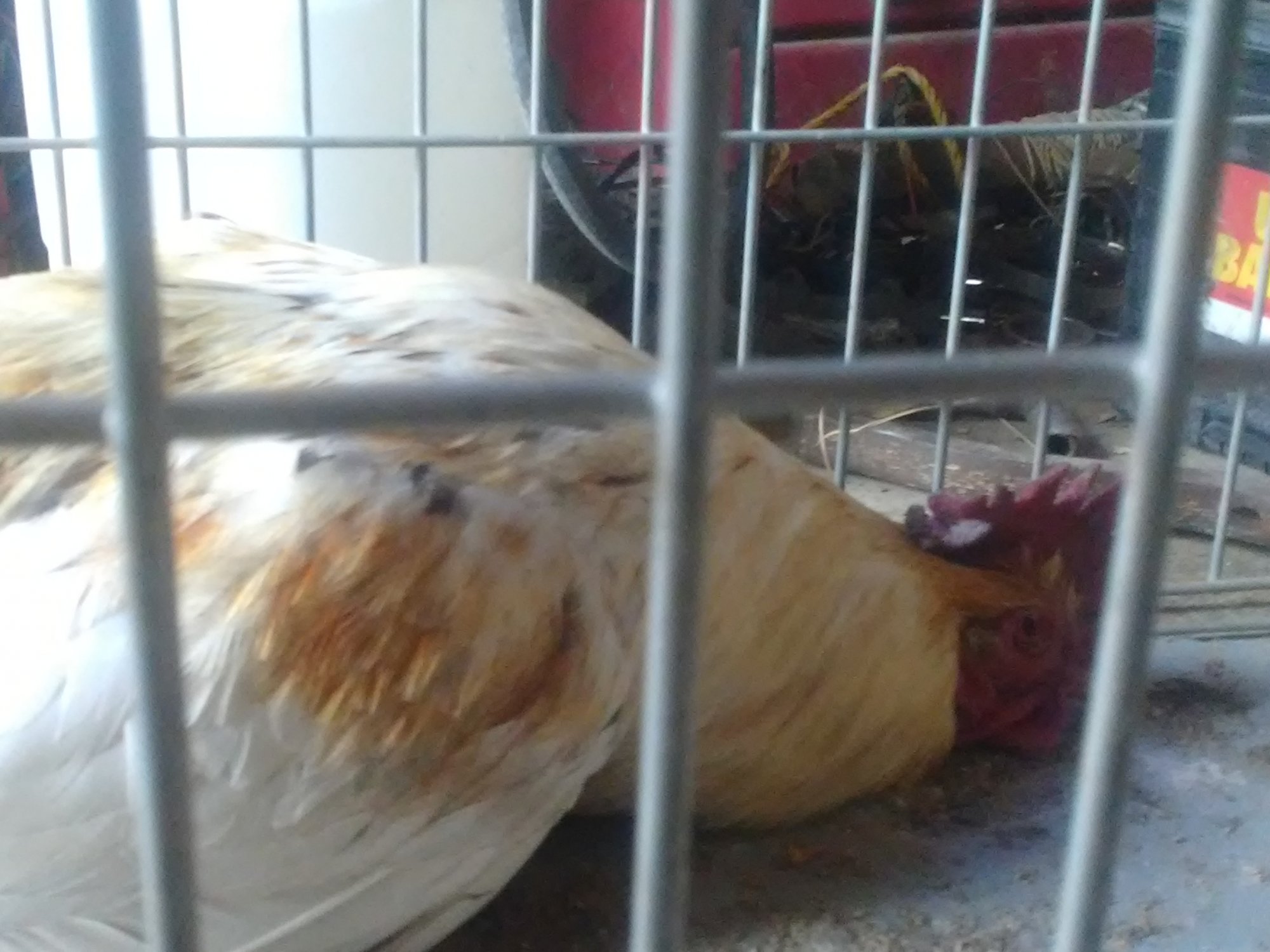 Well it looks like Marek's.
There isn't much you can do for a mareks affected bird.
Also if it is mareks he is a carrier of the disease for life.
He ill have infected your hens.
as seriously as he is acting.
If he is not cut or brused from a dog or predator attack.
You could decided wha to do.
but I would go with mareks.

For starters I would isolate him (which it looks like you have done) and give electrolites and vitamins in his water. Also give some nutri-drench directly to him if you have it. If he can't drink water on his own, you can give with a feeding syringe, just place in the front of his beak and let him swallow. Do this as often as you can, as much as he will take until he drinks on his own. Give him a good going over and look for anything amiss, wounds, lice, mites, lumps, etc. Monitor his droppings to see if they are normal.
How old is he? How are they housed, what do you feed, do they free range, all other birds seem normal? Any possibility he got into some thing toxic? If he's eating, make sure his crop is emptying properly. Those are some starting suggestions to try to ID what is going on with him. Was he vaccinated for Mareks? A possibility, but not the only thing possible. Was this very sudden, or did you see anything off before with him?
Do you have access to an avian vet?

Here is some good reading on Marek's disease in chickens.
http://www.thepoultrysite.com/articles/3576/mareks-disease-in-small-flocks/
This article from Christine Heinrichs explains the symptoms of Marek's Disease in poultry and how to prevent it occurring in small flocks.

The good news about Marek’s Disease is that it is rare in small flocks. Personally, I’ve never seen a case or even heard of anyone I know having a case. It’s nearly completely preventable.

The bad news is that the virus that causes it can be anywhere. It’s considered globally endemic in poultry. If your flock catches it, there isn’t any treatment for it and chickens that get infected are likely to die.

Causes, symptoms and how it spreads
Marek’s Disease is caused by one or more of three herpes viruses, in the same family that causes chicken pox and cold sores in people. Marek’s is not the same and you cannot catch it from your chickens. They can catch it from each other, though, and once it’s in the flock, it’s difficult to get rid of it. Young chickens less than five months old are more likely to catch it than older chickens.

Marek’s Disease causes tumours in chickens. The tumours may grow in the eyes, on the skin, in the nerves or the internal organs.

Usually the first sign is a chicken that goes lame. She’s paralysed by the tumours growing on her nerves. The skin form shows up as enlarged feather follicles and white bumps on the skin that turn into brown scabs. The eye form turns the eye grey and the iris becomes misshapen.

Tumours on internal organs are only diagnosed by cutting the chicken open, which is done in a necropsy to determine the cause of death. Some government offices offer free or low-cost necropsies as part of infectious disease programs.

All forms of Marek’s build up virus in the feather follicles, and it remains able to infect other chickens for months. All litter from chicken houses that have had Marek’s infection need to be completely cleaned and disinfected before vulnerable chickens move in.

The virus can be as airborne as a sneeze and it can live in the dirt chickens scratch up. You can carry it on your clothes. It isn’t carried in eggs, but chicks can be infected as soon as they hatch.

How to protect your flock
That’s where the miracle of vaccination comes in. Chicks can be immunised before they even hatch, usually on the 18th day of incubation. All the hatcheries I know of immunise all their chicks.

If you are hatching at home, you may want to immunise your chicks on their first day. Feed stores sell the vaccine and yes, you can give your chick a tiny injection. K.J. Theodore shows you how online. Follow all manufacturer’s directions and handle carefully. But of course you are always careful with all your chicks!

If your flock isn’t vaccinated and hasn’t had Marek’s, it simply may not exist in your area. That doesn’t mean it can’t come in, though.

If your entire flock has not been vaccinated, as many as 60 per cent of them could catch it, and most will die. Even those that appear to recover may have internal tumours that will eventually kill them.

Marek’s also affects the white blood cells that fight infection, so chickens that survive the initial infection are at risk of catching something else and succumbing to that.

Chicks hatched by their mothers will get some of her immunity. That will protect them for about three weeks. After that, they will need the protection of vaccination. Since it takes ten days to two weeks for the vaccine to develop antibodies in the chick, vaccinating on Day One is the safest policy.

The vaccine given to day-old chicks isn’t as effective as the one given to eggs. Vaccines are available against all strains of virus, and are sometimes given in combination.

As with many diseases, there are highly virulent forms of Marek’s that could still sicken even vaccinated chickens. If Marek’s is reported in your area, check with local poultry veterinarians and breeders to learn which kinds are occurring and vaccinate accordingly.

The best things small flock keepers can do to prevent Marek’s from infecting their chickens are:

Commercial producers have bred Marek’s Disease Resistant strains of chickens. I wasn’t able to determine whether any traditional breeds are resistant to Marek’s, but that trait comes from somewhere. Please contact me if you know of naturally resistant chicken breeds.

Chances are good that you, like me, will never see a case of Marek’s. Make that true for everyone by vaccinating your flock.

coach723 said:
For starters I would isolate him (which it looks like you have done) and give electrolites and vitamins in his water. Also give some nutri-drench directly to him if you have it.
How old is he? Any possibility he got into some thing toxic?
Click to expand...

Sorry to hear your rooster is struggling. By the photos, his comb is turning bluish/purple?
This is usually an indication of not enough oxygen.

As suggested, check him over for any injuries - especially to the neck, spine and under the wings. The neck stretched out like that is concerning - any chance he ingested something toxic - rat poison, moldy feed, dead animal or maggots, fertilizer, weed killer, etc.?

If you have a vet, that would be best.

Poultry Nutri-Drench is very good, do what you can to keep him hydrated. Food isn't necessarily important for a day or so, but fluids are.

Ok here is an update on President Rooster...he is fine. 100% back to his bossy self. I gave him antibiotic injection for three days. Feed him viniger apple sider and did the whole charcole thing. Woke up today and he was talking crazy to me. Lol
At this point I'm thinking it could of been a head injury. Idk what else to call it. Thanks for your help. If anything changes I will let you know

P.s. we are vaccinated against merkers.

Glad to hear he is doing well

I'm glad he is better, but if he relapses and dies, be sure to utilize the $20 necropsy for California residents. The CAFHS lab closest to you is Turlock, next closest is in Davis.

L
My chicken is acting drunk

F
Silkie rooster stumbling and falling onto his right side