Hey y'all I have questions. Just discovered today I have a broody bantam mix. Unfortunately I pulled her off the nest before I realized her eggs are HATCHING. She wouldn't get back on the nest for a little while (maybe 20 minutes). Two had already hatched, one has hatched since, and several were pipped when she got up.

They're in an old tire. She hasn't been sitting on them consistently during the day until a few days ago. It's been hot enough here that she didn't need to, and she's apparently been on them at night and turning them occasionally during the day. So because she was out and about in the yard, I didn't even realize she'd had these eggs hidden away for that long, until I saw the two hatched chicks in there.

Questions:
1) Do you think the pipped eggs will still hatch, even though she was off the nest? The only other chick who's hatched since then (that I can tell) was already mostly done. I'm worried about humidity, the humidity level here is 12% right now.

2) How long should I leave the hatched chicks in with her? Normally I'd let them be but it's triple-digit temps outside and they're hot in that tire!

3) One other chick was partway through hatching when I saw them. It has made a good-sized hole across the egg but has not made any more progress since then, in fact the hole is large enough that its wing almost pokes out. Should I help it out (and if so, when)? Its beak is poking out and it seems to be breathing well, but it's not actively working on hatching.

This is where we're at as of now. You can see she's not actually covering the partly hatched chick. She has 13 more eggs under there, if my quick count was correct! 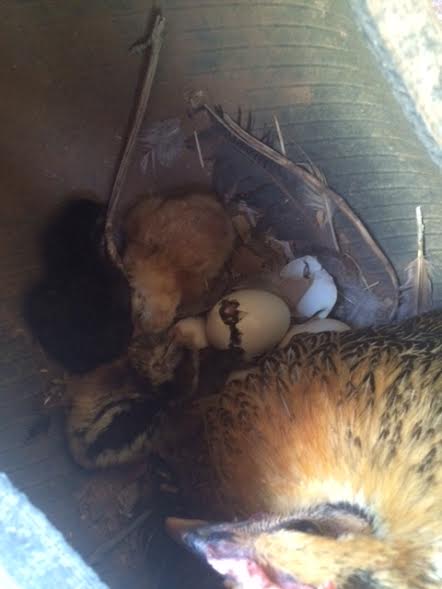 Sorry for the long post, I guess I'm an anxious grandma. Not my first hatch but this one is a total surprise.

You can leave her be, or pull chicks as they hatch. Sounds like she's an experienced mom though, so I might leave her be. Another day or two and she would have hatched without you knowing about it.

Nope, not an experienced mom. Actually this is her first hatch! She does come from a long line of great broodies though. And yes, two of my other hatches I didn't know when exactly it was happening, so I didn't worry about it until after. Ignorance is bliss.

Have you tried candeling the eggs to see if anything is moving in them?

I haven't candled them yet. I did notice, when she got up and I looked at them, that the pipped ones moved a little and/or chirped when nudged. So as of that time, they were alive.

I went ahead and helped the stuck one out. Membrane was completely dry, egg yolk absorbed, and now that it's out it seems fine. But I don't want to interfere with the others if possible. Have to leave the house at 5:30 a.m. tomorrow, so I guess we'll see what happens.

Also I just peeked out and another just hatched! So we're up to 5 now (that I can see).

Could hen still be broody immediately after hatching and killing all of her chicks???
2

Malpositioned chicks! What do I do?
2