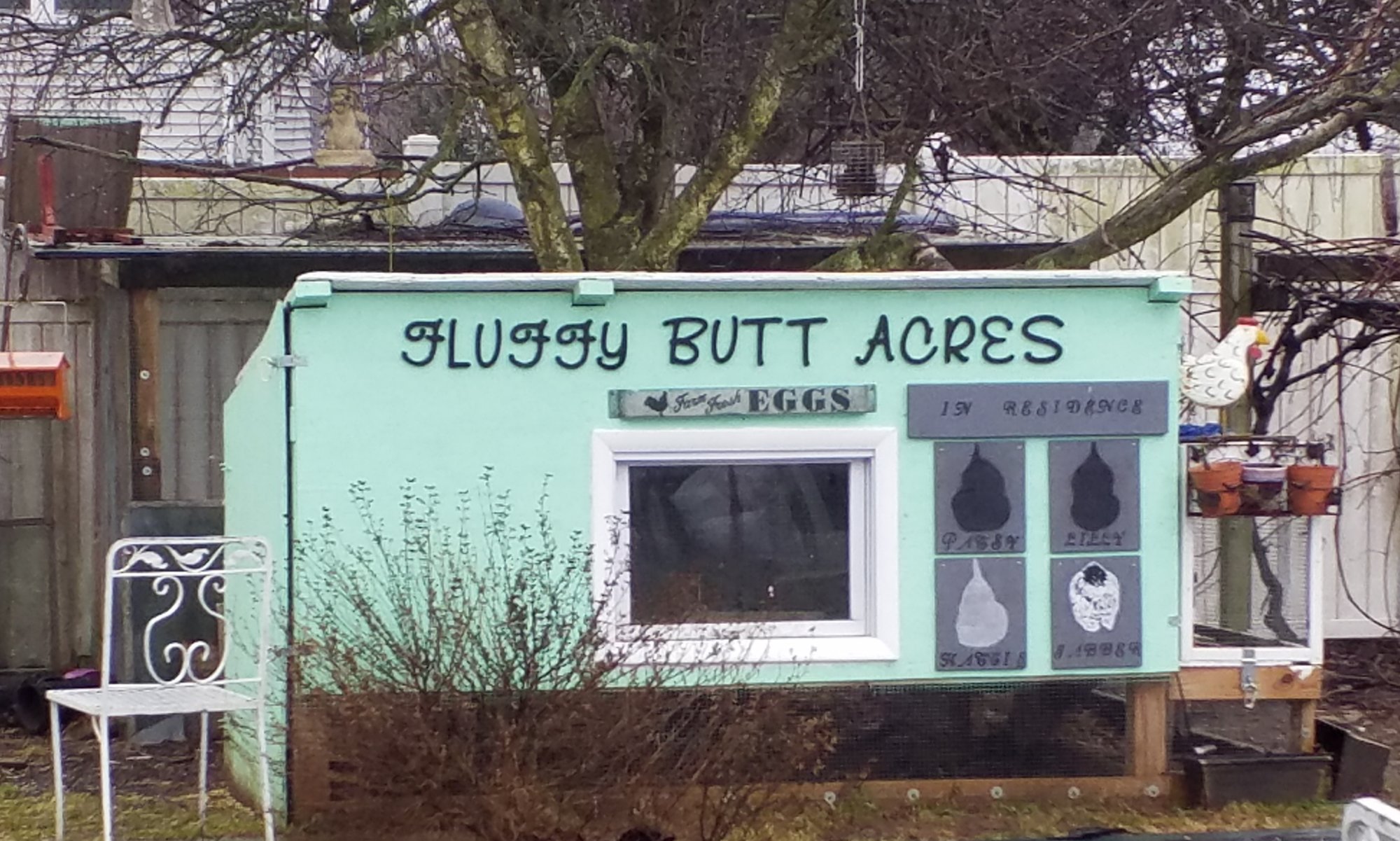 I have been wanting to do this for some time now. I knew once I started doing this there would be no going back. So I am now diving in and I hope you all enjoy coming along for the ride.

First of all let me tell you how we view our flock as that will help you to understand why we treat them like we do.

Our birds are our pets and we treat them as such. We do not care if someone is not laying eggs. They are welcome to stay at Fluffy Butt Acres until they pass naturally. (Now don't go telling them that! I would hate for word to get out) We do thoroughly enjoy the fresh eggs.

I plan to tell stories from the past as well as from today. I hope you all enjoy and will share stories of your flocks as well.

Our other two residents came to us in April as chicks. My wife raised them until they moved outside and then they became my responsibility.

Hattie is our lavender orpington hen. She has not starting laying yet but i expect she will once the days turn longer. 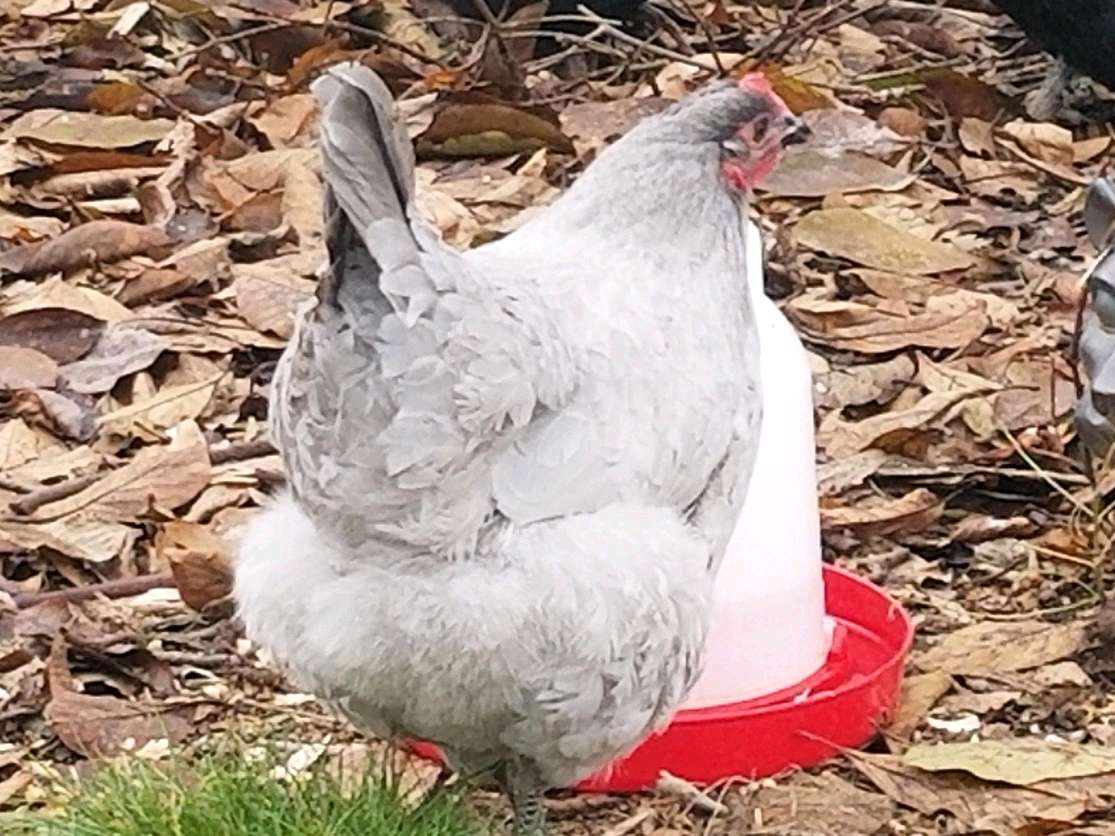 Jabberwockie, Jabber for short, was supposed to be an Easter Egger hen, however, he is clearly not a hen. 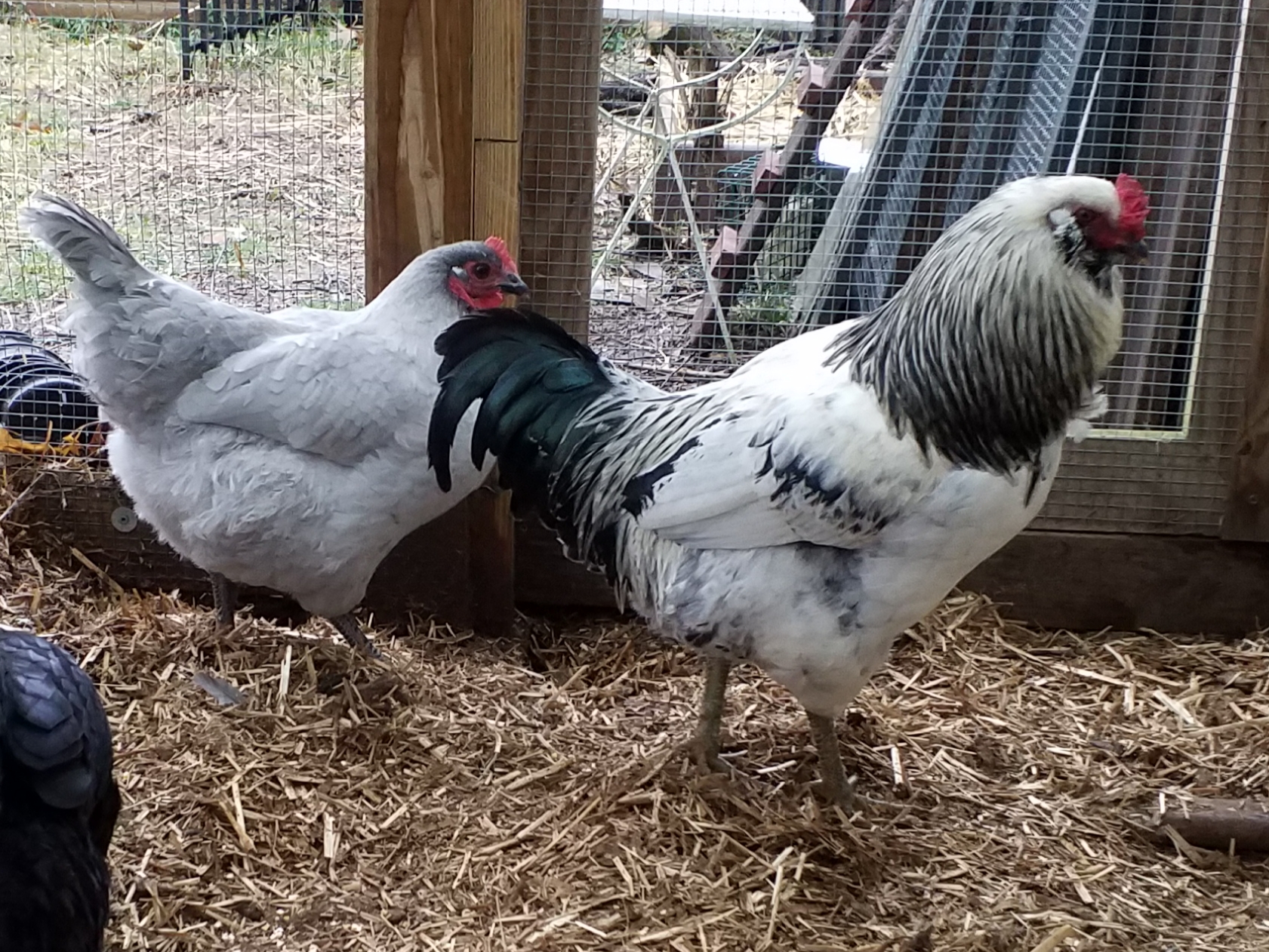 As you can see from the front of the coop, we currently have 4 residents. Patsy, Lilly, Hattie & Jabber. 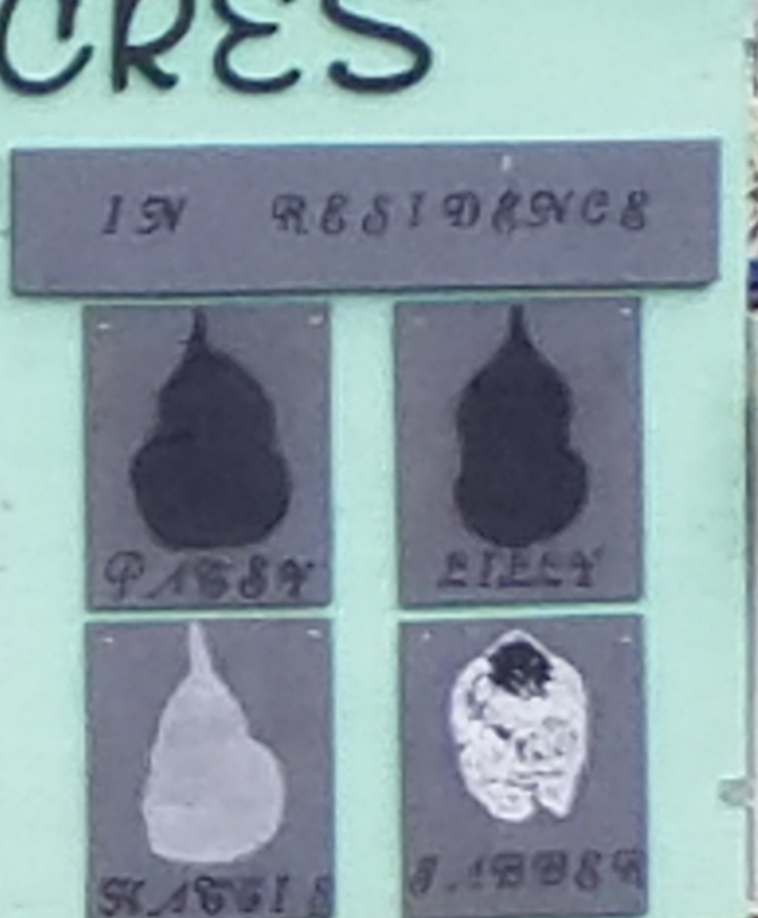 Patsy & Lilly have been here the longest and we ar enot really certain what kind of birds they are but they are likely Black Sex Links. Hattie and Jabber have just joined the flock this summer as they were chicks we got back in April. Here are their individual photos.

Patsy
She is our alpha hen and is extremely friendly. While not a big fan of being picked up she comes right up to you and will talk and visit. 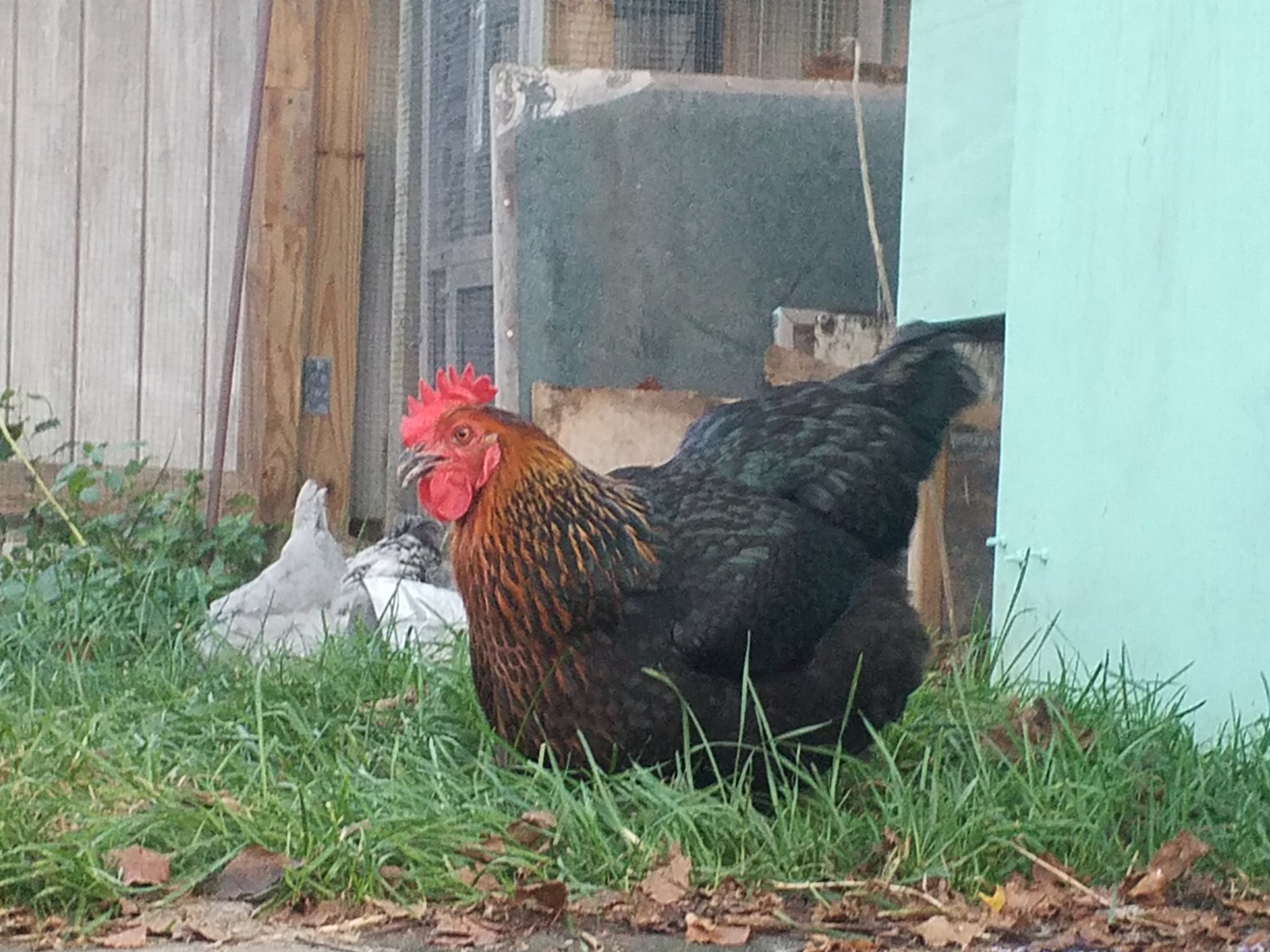 Lilly is currently #2 in the pecking order and intends to stay there. She has become our little enforcer and she defends the flock from such terrors as squirrels, rabbits, doves, and most importantly, ducks. 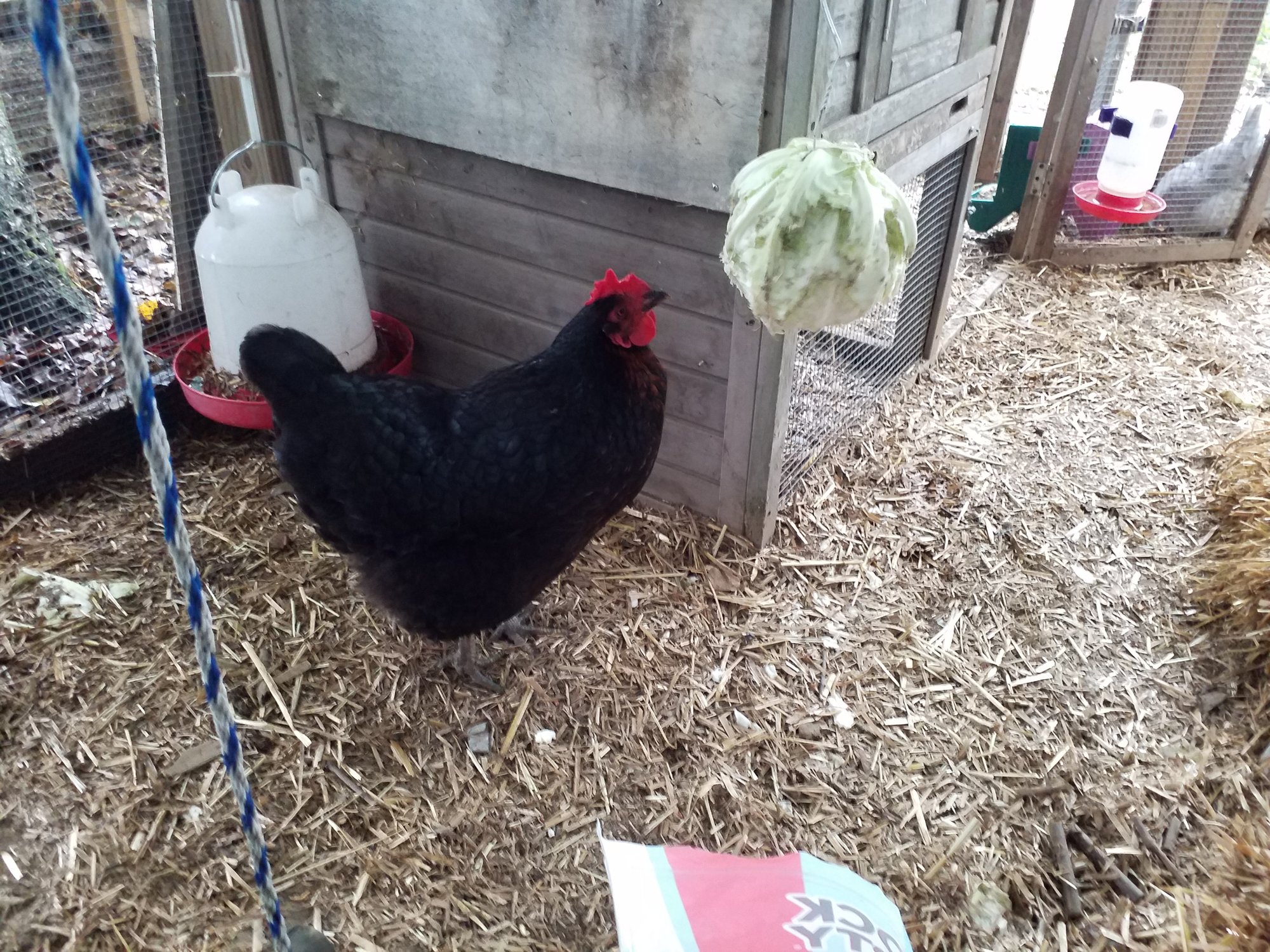 More to come on our newbies.

OK, how about some pictures of the chicks from back in April of last year? 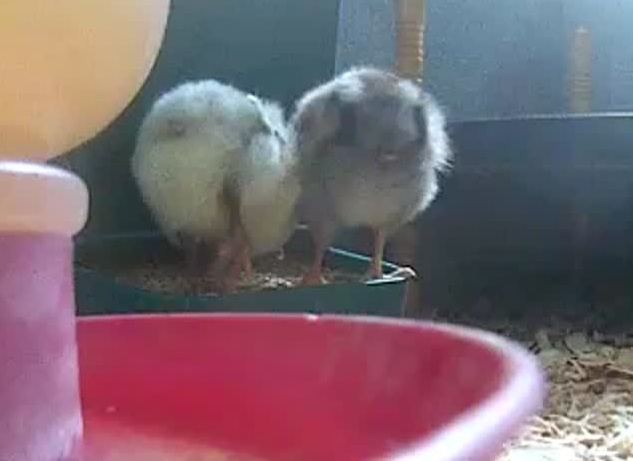 Here is Jabber. He was crazy from the start. 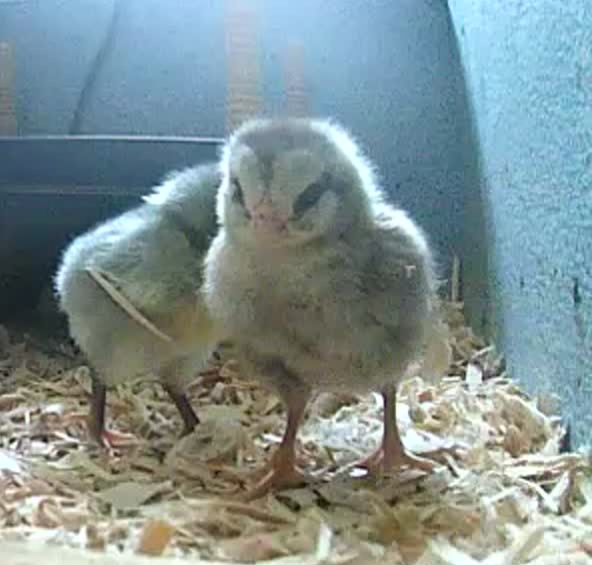 And here is Hattie, so sweet and friendy from day 1. 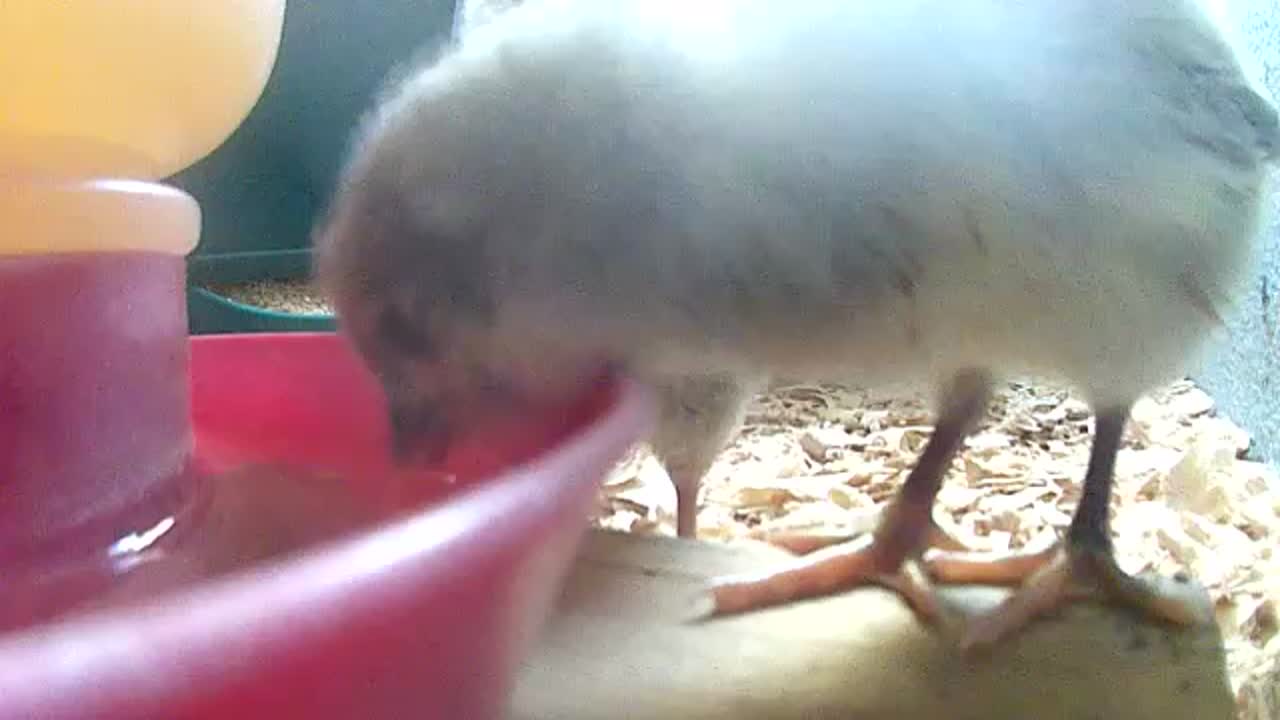 So I saw proof today that the chicks are fully grown. I was like, "Please get a room. The coop is empty right now. I don't need to see this!"

Here they were afterwards...... 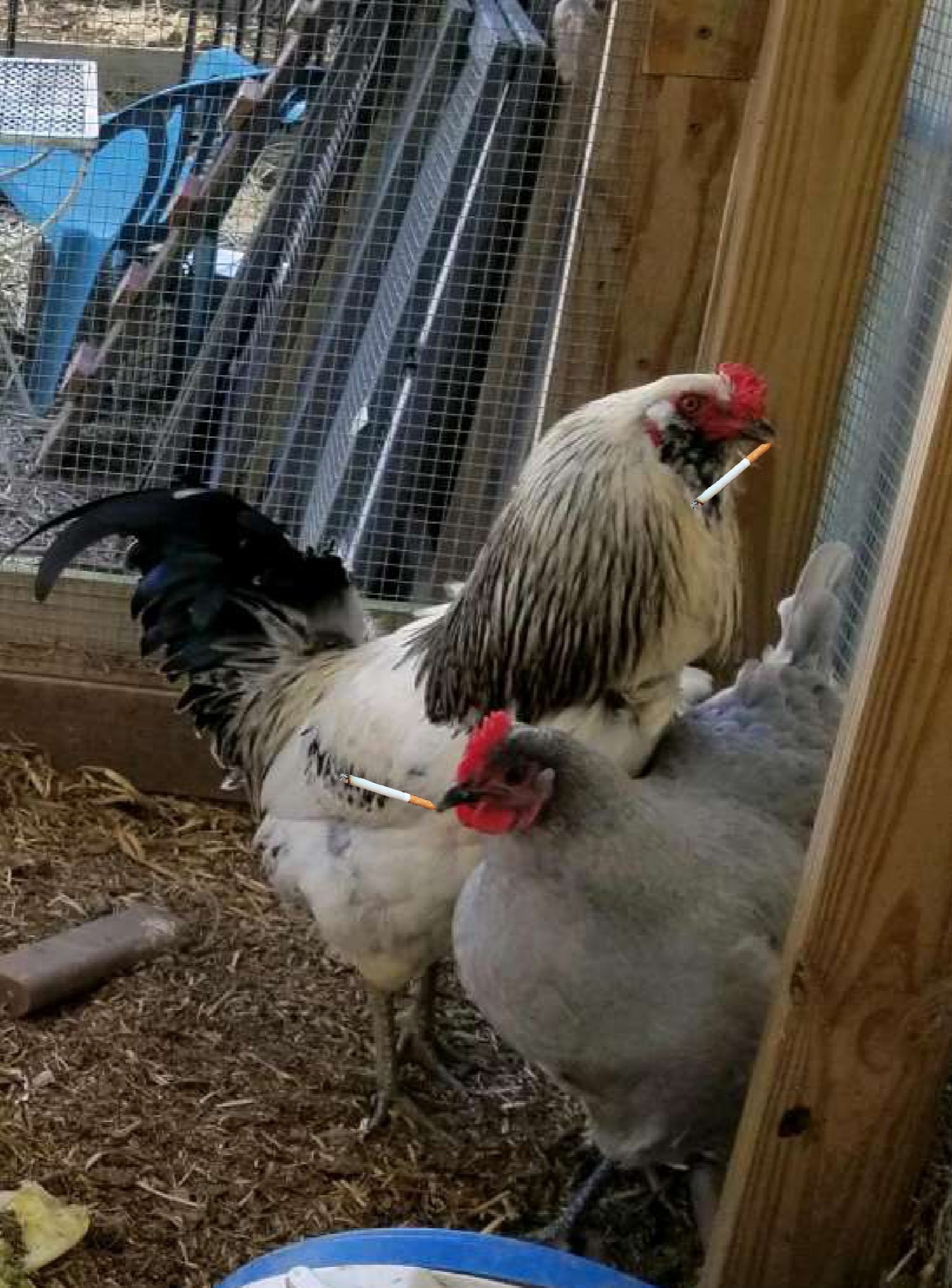 Izzychicky said:
I love the name!
Click to expand...

Thank you. It was inspired by an old thread on here called Fluffy Butt Friday, where every Friday people would post pictures of fluffy butts. I was addicted to it for over a year until it died out.

I love the name!

Lovely flock, lovely coop. Will be watching this thread for more

So I am thinking that it might be a good idea to let everyone know how i came to love chickens so much that I am telling my story on a website for all to see. This will be a long post broken into at least 2 parts so please bear with me.

I grew up in a rural part of PA in the mountains north of where I now live. The "hill" where I grew up had several farms on it and we had a large track of land ourselves although we did not "farm it" for crops. We grew most of what we ate but that was as far as we went.

One day I noticed several chickens scratching in our woodline (we had a large patch of woods on the property). I got my Dad and showed him. He was sure that were from the neighbor's farm about 1/2 mile up the hill. He asked me if I thought I could catch them and then we could run them back to the farmer. I had just read a book about a boy in Hawaii who when the volcano was erupting was told by his mother to go catch the chickens so they could take them with them as they evacuated. The description on how they caught these chickens in the book was so vivid that I told my Dad I certainly could and I set out to get them. I managed to catch the 5 of them, we placed them into a cardboard box and headed up the road. The neighbor was so grateful for me catching his chickens that he offered me one of the hens as a pet. I gratefully accepted and I had my first chicken. The neighbor even gave me an old army crate to turn into a coop for her. I had no idea about chicken breeds but she was speckled black and white and laid tiny white eggs. I named her Speck. (Clever right? Hang on I get better at naming chickens!)

Apparently my Dad had gotten interested in chickens as well because a short time later 50 hens showed up at our house. However, they were not there for eggs. He must have gotten them from an egg producing farmer because we going to butcher them. I asked my dad for one to keep Speck company because I had learned that there should be at least 2 in a flock. He promised to give me one if I helped with the butchering. I did and I had a second hen. It was a brown chicken so I named it Brownie (What a clever kid I was). As we came to the end of the butchering process my younger brother learned that I was getting another chicken and so he had to have one too. He cried and whined until my dad gave him the last chicken right before it was butchered. My brother named it Lucky (Chicken naming skills must be genetic).

In exchange for Lucky my brother was supposed to help take care of the chickens. I knew that would not last and sure enough after a very short period of time my brother gave me Lucky so he would not have to take care of them any longer. I had a flock of 3 hens. Well the neighbor farmer saw my impressive flock of three and let me know that it was unsafe to have a flock of 3 hens without rooster to protect them. He promptly brought me one of his spare roosters and I named him Rooster Cogburn (Clever name again). I would have this core group of chickens for years. I trained Spec and Brownie to do tricks and Rooster Cogburn defended the flock from my youngest brother who to this day is afraid of roosters.

I had always wondered why I had I no pictures of them. Over the years I had asked my Dad and Mom that question and they always said that photographs were very expensive back then and we just did not have the money. I had given up any thoughts of photos until this Thanksgiving. While helping my Dad get the artificial Christmas tree down I noticed how empty the attic was. When I asked my Dad what was up he said that he was cleaninig it out to seal it up again and that every so often he would grab a box of stuff take it down to the furnace, burn what he could and recylce the rest. I then noticed a box of stuff with my name on it. He said that was my stuff from college. I could take it or leave it for him to burn. Thinking quick I said, I'll take it. I thought there might some fun memories in there and that I would probably throw most of it out. While I still have not gotten through the entire box, I did find the picture below. As far as I know, the ONLY picture of me with my flock. Finding it made taking the box one of the smartest things I have ever done. So for those of you who were wondering how old I was when all of this happened, this photo was taken about 3 or 4 years into having the flock.

The chickens on my shoulders are Speck and Brownie. They would fly up there everytime I came to the coop.

Rooster Cogburn was so beautiful and I am sad that I have no photos of him. Even if I were to find another in the box you can see how the photo aging would rob it of his beautiful plumage anyway. 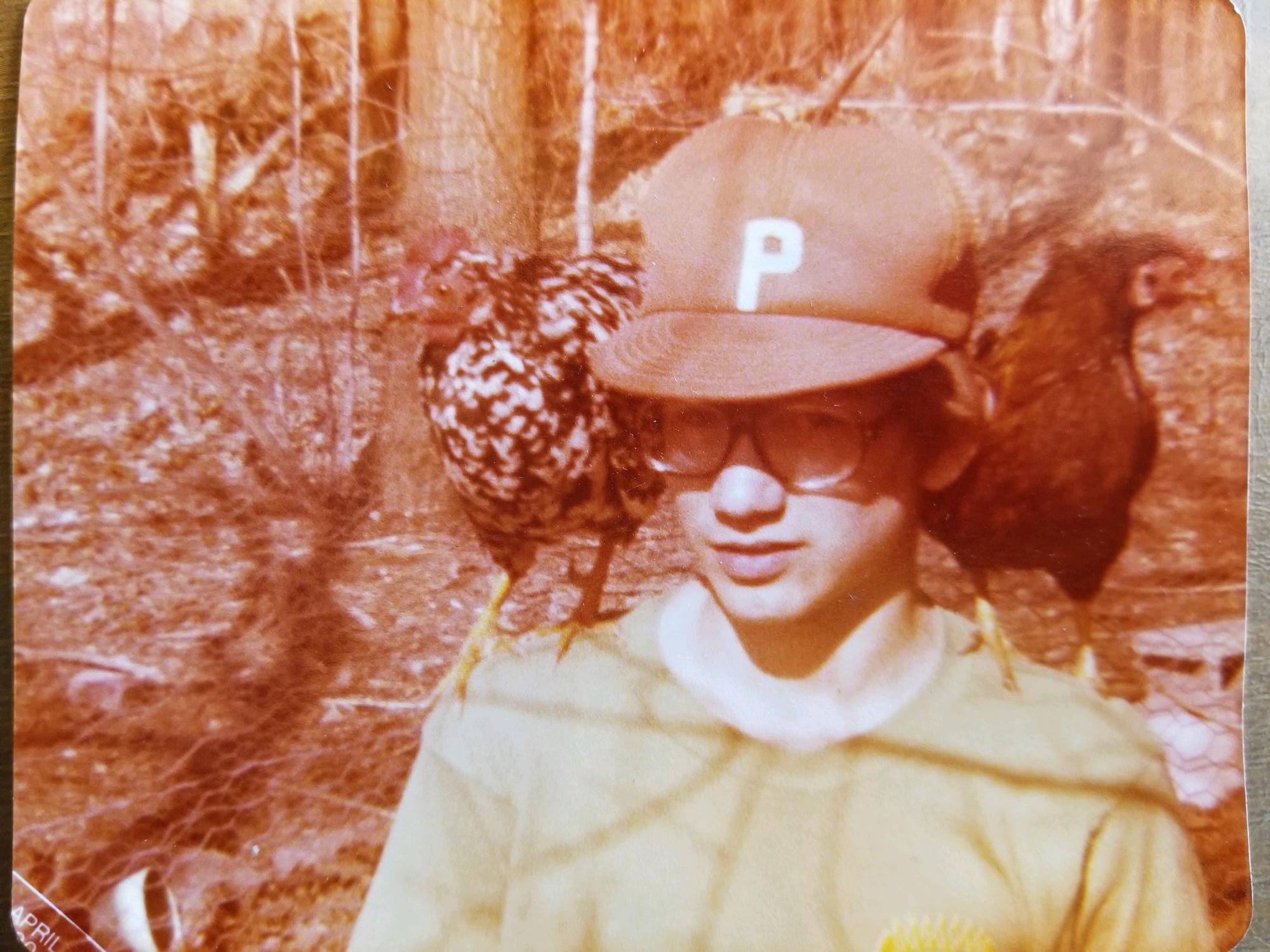 I love it! What lovely birds!