Historic Presence of Jungle Fowl in the American Deep South

I have a two fold question. First, can anyone either tell me about or point me to resources discussing whether red jungle fowl, RJF hybrids, or closely derivative breeds, were used as farm or game chickens in the American deep south in the late 1800s or early 1900s?

Second, to what degree are American game bantams or American game chickens derivative of red jungle fowl, and what behavioral traits do those American breeds share with RJF?

Here’s why I ask. My family has lived in Florida since the early 1800s. Specifically on the north central and north parts of the peninsula. The environment is sub tropical in those areas. My family were backwoods farmers and hunters until the mid 1900s. Our ethnic group is called the Florida Cracker (yes that’s our real name, you can wiki it). I was raised by my grandparents of that older generation. When I was a child they gifted me with my own chickens. I raised normal breeds such as Road Island Reds and Americanas.

When I was in middle school an uncle gifted me with the kind of chickens my ancestors traditionally raised on their backwoods farms and what they always had growing up. They were only generically called “game chickens.” No other name was known or given to them.

They behaved differently than my other chickens. They roosted in the trees at night. The hens wouldn’t nest in the nest boxes in the coop, but instead they hid their nests in the woods and on fence lines. The rooster was more protective of the hens and would even call them over to get bugs instead of eat them himself. Because of how they hid their nests they weren’t great egg chickens but they were great at surviving free range. All they really needed was a water source.

Now many years later I own my own farm in the Florida woods. I’m looking for those traditional Florida homestead “game” chickens but no one I know has them anymore. I want them both for the nostalgia and for the practicality of having a more predator resistant bird.

Physically the pictures I can find that look just like them are Indian Red Jungle Fowl. The color and size are right. But I’ve also found some pictures of American game bantams that look like them as well. And some Old English bantams.

I cannot recall the leg color of our “game” chickens. I do know they never had an “eclipse” molt based on what I’ve read about eclipse molts in the jungle fowl thread here. Their personalities weren’t overly skittish of humans but they preferred to keep their distance. More than anything their roosting in trees and hiding their nests seemed defining. They reminded me of little wild turkeys in chicken form in their habits. Or maybe a better way to put it is that they had some ways about them more like guineas than chickens.

I do have some red jungle fowl chicks on reserve from a farm in central Florida. I don’t care if they’re pure or not, I only care about them approximating what I grew up with and what my ancestors may have been keeping in 1900.

Any ideas what a Florida Cracker “game” chicken might be? One uncle called them “Spanish” game chickens. Many of our traditional domestic animals such as the Cracker cow and Cracker horse are directly related to livestock the Spaniards brought that subsequently adapted to Florida. Would there be reason to believe the Spanish had access to jungle fowl-like chickens that adapted to here? Or were we perhaps raising some form of wild phase American game chicken?

Welcome, welcome to the group!! I'm sure you will find someone here with some bit or two of information...it's a huge resource of 'chicken-information-gifted' folks. I, myself, can't help you a bit, but your wonderful post (lots of folks have a bit of a typo or misspelling in something that long, but I'm a proofreader and your post is - near as I can tell - perfect as well as informative, articulate, and interesting!) caught my interest.
And now I'm going to watch with great attention whatever answers you get, for I am very intrigued and want to know more! Thank you for sharing, and again...welcome!

Wild Red Jungle fowl were never raised as farm stock in the US. They were stocked by South Carolina Fish and Game as a game animal, an idea that never quite took off, but the chickens remain in an isolated population.

Gamefowl, (bankivoid gamefowl) have had recent (in last 400 years) outcrosses to WRJF, and share many traits. Most feral populations in Florida and Hawaii are descended from escaped gamefowl.

Sittin on a rock

If you haven’t seen this before, note that this hatchery offers a strain of red jungle fowl that might be something to look into:

I read this article a while back.

Some gamefowl I bred that look similar to the RJF 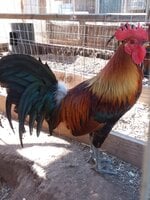 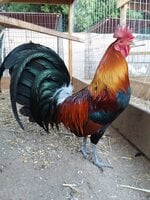 I remember the dominant rooster well, and he looked identical to your top rooster.

Will gamefowl roost in trees and hide their nests?

Florida Bullfrog said:
I remember the dominant rooster well, and he looked identical to your top rooster.

Will gamefowl roost in trees and hide their nests?
Click to expand...

oh ya...If they arent penned in a cage they'll sleep way up in the trees. like 20+ft up...
And I've had several hatch chicks in the creek area on my property... deep in the bushes.

My games free range and go in a coop, but it takes a little training. I do have a roomy coop, though. Of course, if they aren't penned, you can only have one cock. If you have a big farm, maybe multiple flocks, with their own range. If you don't separate the stags, they will have it out. Sometimes mine lay in the nestbox, but they also like to fly through my shop window and find a hidey spot there. I found three eggs on the top shelf in there today.
You must log in or register to reply here.
Share:
Reddit Pinterest Tumblr WhatsApp Email Link