Ok, so I'm a BRAND NEW chick mama. Never before owned an animal that was not a dog, cat, or fish! Our first day in we lost one of our 10 Buff Orpington's. Tiny was about 1 week old and it was traumatizing for me. 6 hours after getting her home she just died...I think she was stressed from her move and we didn't kno what we were doing. Three days later we added 6 more chicks the brooder (Separated them for a couple days first) 2 Americaunas and 4 RIRs.

Four days later...Fatty, our 1 week old Americauna, was close to dying. I was determined not to lose another chick!! I noticed she had some pasty butt and was lethargic so I went to start cleaning. I then noticed she was chirping but no sound was coming out. It was like she was gasping for air constantly, buldgy eyes, wouldn't move, wouldn't eat, wouldn't drink. After much googling I determined that she may have had brooder pneumonia. (Which is basically a death sentence to babies...or so I've read?!)

I then read that garlic and oregano oil in their water could help. So for a few hours I hand watered her this concoction through a syringe. She perked up whenever I did this. I talked to her and tended to her for hours. I told her she was not allowed to die! I cried many tears...At one point she seized and I thought she was gone. She flopped onto her side and stopped moving. She got her bedding all stuck on her head and in her beak. I cleaned her up and gave her more water and lightly stroked her all over to get her going. She stood up and opened her eyes for a moment!!!

By 1:30am, after many tears and prayers, I finally went to bed. Didn't think she'd make it through the night as she was still gasping for air. I didn't want her to be alone so I separated a section of the brooder with chicken wire for her to sleep in. Most of the flock laid down for the night right up against the wire and she laid down on the other side right up against it as well. (Hello more tears!! You could tell they really care for each other!)

Morning came and I made my husband check on her (I couldn't bear to find her dead!) He came back and said she's still alive!! I nearly cried again! LOL! My husband was shocked as he was certain she was going to die and thought there was no hope. That morning she was happily wandering around with her flock and no longer gasping for air. She's was still a little weak and not quite as energetic as the others but doing much better!!

Now two days later and she is good as new!! The other Americauna, Fluffy, has now caught up in size. I'm guessing Fatty had stopped eating for a bit and her growth stunted a little. I fed her some scrambled eggs and she gobbled it down. My chick mama heart is overjoyed!! <3 (And I'm still exhausted from that sleepless night. Haha!) 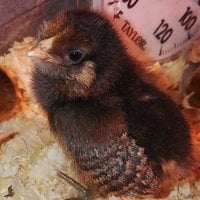 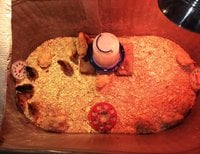 Well done for saving her! The best owners will do anything to keep their babies happy and healthy.

Your babies are beautiful

Hybridchucks said:
Well done for saving her! The best owners will do anything to keep their babies happy and healthy.

Your babies are beautiful

Thank you!! My husband thought i was crazy...but was then super impressed. Hahaha!

I highly recommend getting some Nutridrench and keeping it on hand. Also granite chick grit.

jonalisa said:
I highly recommend getting some Nutridrench and keeping it on hand. Also granite chick grit.
Click to expand...

Thank you so much! I'm such a newbie so that's very helpful! I'll forever regret not taking better care of our first chick who died on day one. (We buried her under a tree. )

I plan to be much better prepared for our next round of chicks and will pick up your recommended items for our current ones!

We all make mistakes, we learn from them! You're doing absolutely great