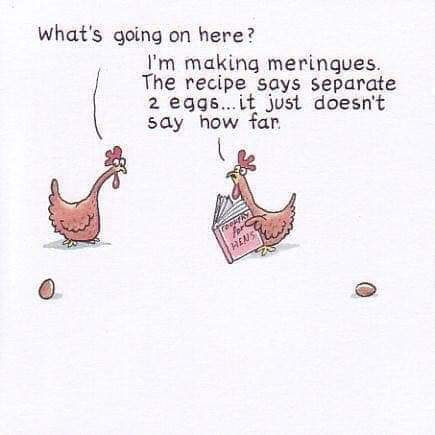 Sorry for the joke sharing, but you guys are the only ones who are gunna appreciate my humor

Muscovy Wunda said:
View attachment 2009646
Sorry for the joke sharing, but you guys are the only ones who are gunna appreciate my humor
Click to expand...

Trimurtisan said:
I'm going to have a new flock of birds when I wake up. There's already 6 external pips!
Click to expand...

First one just popped out. It's a Phoenix!

Trimurtisan said:
If your serious I can connect you with her. She's got a good selection of rare genetics. She's pretty fairly priced too. I've got 3 birds from her so far and they're "all" great.

The Ayam Cemani cockerel is a butthead, but he's a good representation of the breed. Her AC are bred towards Indonesian standard. They're more game like, and he just doesn't like being in 2nd place. (Sully is twice his size though, so he doesn't contest it either)
Click to expand...

I wonder if she’ll have chicks in a few weeks... or hatching eggs now. I’m on a mission to have every color Orpington in my flock. Currently I have buff, black, blue, red, lavender, mottled (maybe - I have three grow outs that all look like Roos) jubilee, and silver laced. Lost my gold laced and chocolate double laced girls last month to a hawk. They were HUGE and I never would have guessed that they’d be taken. My two favorite birds.

Most of the roosters I’ve owned are jerks, haha! The only exceptions being any serama roo and my silkie - RIP. I miss him as our flock leader. I inherited a lavender ameraucana from my mother in law and he was always attacking me. I’m not a fan of that breed anyway, they just look mean. Eventually one of the 4H families wanted him, even after I fully disclosed his buttheadedness. I still have his last baby, a roo that looks just like him but not a meanie, he just gets no respect in the flock. Once I find him a ho, no more ameraucanas for me.

My son really wants some diverse egg color layers in the flock since he sells the eggs to friends and family. He thinks he’ll sell more. Hah, already a salesman. I’m hoping we get some females out of the isbar or crested cream legbar eggs that are going in the incubator today.

Trimurtisan said:
First one just popped out. It's a Phoenix! View attachment 2009718
Click to expand...

What's everyones flock numbers looking like? And what are you hoping to add/subtract??

Currently my flock is 4 chickens (all hens), 2 ducks (drake and a hen), and 2 crazy geese (goose and gander).
Wouldn't mind adding a couple more pullets even though I'm overflowing with eggs as is. Waiting to see how the summer with my duck pair goes to see if I need to add more female ducks...so far so good though.
Click to expand...

Good Morning Wonderful Peeps!
Love your sense of humor @Muscovy Wunda
I share funny stuff about chickens etc with my dh and he's like a cow at a new gate he just doesn't get it at all.
You must log in or register to reply here.
Share:
Reddit Pinterest Tumblr WhatsApp Email Link