What happened to the pictures? Folks should post pics when they get these, please!! That's the funnest part for the square makers!!!

BTW..where is Karan lately????? It's late in the season for the greenhouse to be overwhelming her, is she being probed by aliens??!!

Last I heard, Karan was organizing, hosting and attending a 4 day family reunion. If I remember from last year, these reunions of her family's are a BIG deal. Themes and everything. Her pictures were really entertaining. That's probably what she is up to...and the recovery afterwards...

I am finally back on BYC, herei copy of what I posted on Crochet chat thread Hope that's OK..


it has been alot of viruses with people and computers around here. Noah and I both had a bug.

Then a couple of weeks ago at work I got a call at the office that my DH wanted the ambulance called to the cafe he was at. Him being an EMT I figured someone was ill. I paged the amb out and then Chief Deputy asked if I paged it for him? I said I didn't think so, but I called back to make sure. And Yes it was for him!!!

Scared me, I told them it was for him and I was on my way over there. We spent that day at the hospital. It ended up not being his heart, Thank goodness at first it sure seemed like it, and they were doing all the tests for heart problems. Boy that's a lot of tests...

We have had some good folks by us and praying at that time. Now Dh is determined to eat healthier and take better care of himself.

This gave him a sense of mortality and I sure have been appreciating still having him around.

He followed up with a check up at our regular Dr and he has a treadmill stress test scheduled for tomorrow, just to get a base line reading for his file. It turns out he had a sever spasm of the esophagus, which as it turns out does mimic a heart attack. So answers why he and we thought he was having one and they ran so many tests. wow that was a shake up...

I did some reading to do some catching up, I am going to do my best to keep up and keep in touch with ya all better to.

I will try to get things back in order here on the Babyghan thread and get things rolling again. Things went Great at the reunion. But then got very crazy after wards. So now we will see if I can get back in the saddle ,, as it were.

Well gotta get Noah to bed, thanks for thinking of me gang, sorry I didn't think to call chix and have her pass along my situation before.

Be checking in, in the morning

Sorry this took so long! Just kept trying to get better pics, and it hasn't worked out yet! When I get some better pics I will try to post them 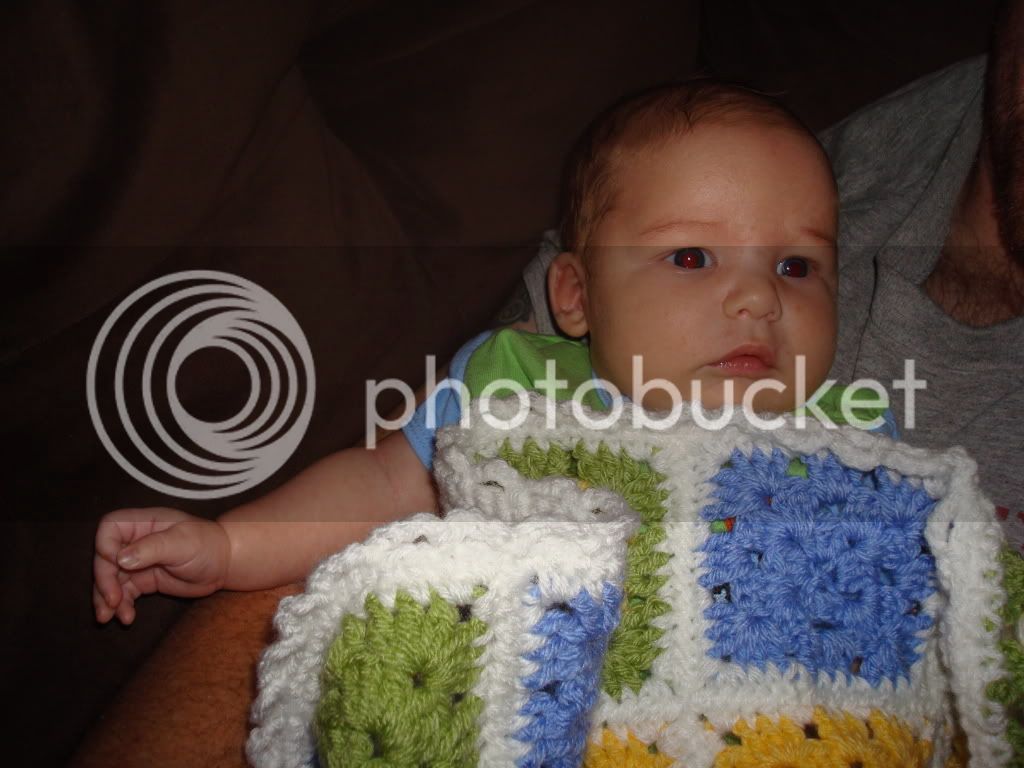 Oh my word...is he really that BIG already???

He is so precious, Okie. And the babyghan and he match so well.

What happened to Karan? Is she okay lately?