the kids got a special treat this morning. Scrambled eggs and cheese, with a piece of hamburger.

featherhead007 said:
the kids got a special treat this morning. Scrambled eggs and cheese, with a piece of hamburger.

our secret. Don't let your birds know!
Click to expand...

But honestly, I think they prefer bugs out in the yard, (So I just let them all out)
G

RoyalChick said:
Oh I think you under-estimate me! She is Janet. And Janet is a Barnevelder.
Actually, I cheated a fair bit. I have always been very struck by how beautiful she is and ages ago I studied her profile and since then I have researched the breed because I would love a chicken that gorgeous. I think I have Barnevelders in my future!
Click to expand...

BY Bob said:
An Intervention

After shooting the roosting video I decided I would observe roosting in person for a while. So each evening for a few nights I sat outside Abe watched how they went to bed from the outside of the coop.

Now my presence does effect how they roost. They will stay up longer assuming I have treats. This tends to draw out the process with Aurora and Sydney starting out until the last possible moment waiting for treats. This will usually have the effect of calming down the roosting with Lilly and Phyllis getting settled early and everyone not having enough daylight to pick on anyone.

Normally, this is my influence on the process.

As you all know I try my best to let them run their own society as best I can. I hate to directly intervene in their organization outside of whatever my presence among them might create.

The other night I intervened in the roosting process. I had to. It was quickly going too far for my comfort.

I watched as first Lilly, then Sansa, and then worst of all Aurora ran Phyllis completely out of the coop. Much like Tsuki's Gandalf move, Aurora was dead set on Phyllis not roosting in the coop. Aurora roosts right by the door and would jump down and chase Phyllis every time she tried to enter the coop. As a result, Phyllis was desperately looking for somewhere else to roost.

The last hen I had that liked to roost outside was Maleficent. It was a result of Lilly doing the same thing to her and Aurora. It cost Maleficent her life. I was not going to let this continue.

So I called Phyllis to me. Like always she came running. Of course Aurora thought I had something good to eat and she came following after Phyllis. I scooped poor Miss Phyllis up and decided to place her on the roost as far from Aurora as possible.

That meant someone had to move. I opened the coop door and there sat poor Hattie all molty. I need you to move Hattie. I want you between Aurora and Phyllis on the roost. She did not want to move.

So I poked her with my finger. Not hard, just a little poke.

Hattie shuffled down the roost. I put Phyllis on the roost in Daisy’s (the greatest hen ever) favorite spot.

Hattie did not like that. She started towards Phyllis and pecked her to get the spot back.

I was not having it. I poked Hattie again, Poke

She did not like that and shimmied down the roost away from Phyllis and settled.

In the meantime, Aurora had re-entered the coop and assumed her nightly spot at the other end of the roost. Everyone settled on the roost and I closed the door.

All of this solved one night. I pondered what the long term solution might be. I was very concerned because I can't intervene every night and roosting outside is dangerous.

So without a solution and with much trepidation I went back out the next night to observe. What I saw made me very happy. Everyone roosted just like the old days. No chasing, no fuss. Every hen in her spot. No roosting shenanigans at all. They all went to bed quietly, in order. No muss, no fuss.

So did Hattie read everyone the riot act after losing her spot and getting poked?

Or did this establish Phyllis as protected by me and thus inviolate?

featherhead007 said:
the kids got a special treat this morning. Scrambled eggs and cheese, with a piece of hamburger.

our secret. Don't let your birds know!
Click to expand...

I don't think BLU would hide anything from Phyllis. He's just too smitten by her!

Seems things are getting back to normal. Rocks-Anne wanted some lap time with daddy, so she hopped up on my lap to cuddle (If only for a little while)

Boy I wish it were so.

featherhead007 said:
Seems things are getting back to normal. Rocks-Anne wanted some lap time with daddy, so she hopped up on my lap to cuddle (If only for a little while)

There you go. Give them a couple of more days.

Here (For your enjoyment) is my Fluffy Butt post for the day. Jaffar in the den with me. 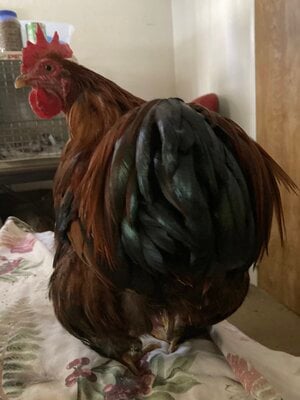