Development of a Chicken Embryo Day by Day 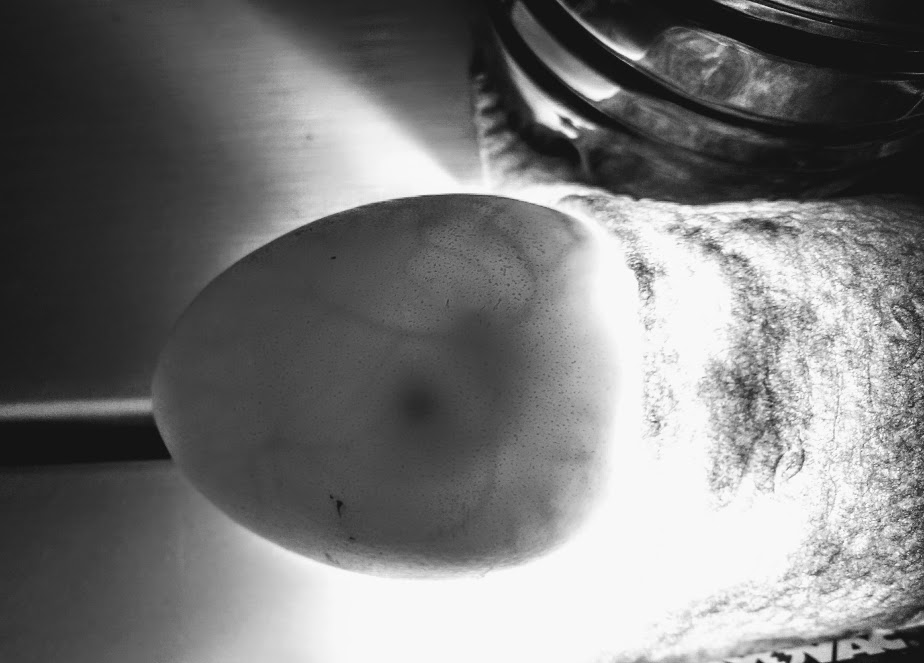 This is an explanation of what is happening each day as a chicken embryo develops, complete with candling pictures. The egg I am using is a silver spangled spitzhauben.

Definitions you may need:

Vitteline membrane: The membrane that surrounds the yolk and separates it from the white

Allantois: The allantois is the chick's connection to the chorion. It helps the embryo exchange gases and deal with liquid waste

Chorio-allantoic membrane: The chorion and allantois fuse to become this. It is critical in exchanging gases between the embryo and the outside air, and calcium absorption from the egg shell. When the chick hatches, this membrane remains attached to the egg shell.

Vitellus: The yolk and vitelline membrane.

I will admit that I did not do this on purpose, but rather dropped an egg on the way to the incubator. Still, it provided a good opportunity to confirm fertility and show what a fertile egg cracked open looks like. You can see that the blastodisc, the small white dot on the yolk of the egg, has been fertilized and has become a blastoderm, indicated by its bullseye-like shape. You can see the white dot in the middle and the faint ring around it, indicating that this egg is fertile.

This is the first 24 hours the egg is in the incubator. While there is not much to see yet, there is still activity going on inside. Very soon after incubation begins, a group of cells becomes what is called the primitive streak, and it is the longitudinal axis of the embryo. From this, the head and the backbone of the embryo begin to develop. The nervous system is starting to form. The alimentary tract appears. Blood islands form. Still not a lot to see, but inside the embryo is busy developing. The blood islands start linking and forming the vascular system and fine blood vessels appear, and the heart is being formed elsewhere. By the 44th hour of incubation, the heart and vascular system join together. The ear begins to form. Can you see the embryo in this picture? If not, here is an edited version that is easier to see. On this day, the embryo is laying on its left side. The heart is now beating. Blood circulation begins. Limb buds are forming. The nose has begun. The blood vessels are thickening and lengthening, as you can see in the picture above. The allantois begins to form. The vitelline membrane spreads over the yolk's surface. You can really see the embryo now. A little photo editing to see the details easier. The amniotic cavity has developed, which will surround the embryo and protect it, while also allowing it to move. The tongue has started to develop. Blood vessels continue to thicken and lengthen, and the allantoic vesicle appears, which is critical in respiration, waste storage, and calcium resorption. The brain divides into four parts and the eyes are starting to form. The embryo is clearly visible. Photo editing for details. The embryo's head and tail have come closer together, forming a distinct C shape. The fingers on the inferior limbs differentiate. This day is very important - it's when sex differentiation occurs. The respective reproductive organs for each gender begin to form. The dark spot on the embryo is the eye, you can just make it out.

The beak has begun to form. The vitelline membrane continues to grow and is now surrounding more than half the yolk. Fissura (small clefts) form between the second and third fingers of the lower limbs, and between the first, second and third fingers of the upper limbs. The eye is much more prominent, as are the heart and brain. Voluntary movement begins; the embryo can now move at will. The eye is now clearly visible. The embryo's neck thins out and now clearly separates the head from the body. The beak is getting larger. The brain starts to enter the cephalic region and now begins to get smaller proportionally to the embryo's size. The comb starts to develop. No more photo editing; the embryo is now deeper in the egg and there are no more small details to highlight.

Inside, the embryo's upper and lower beak are now completely differentiated. So are its legs and wings. The neck continues to lengthen. The brain has now settled completely into its cavity. The external opening of the ear has formed. Claws appear and begin to grow. The allantois grows larger. Vascularization increases. The very first feather follicles are appearing. It's really starting to look like a chick! The beak is starting to harden and the egg tooth appears. The nostrils become present as narrow openings. The eyelids begin to grow over the eyes. The distal portions of the limbs lengthen. The vitelline membrane now completely surrounds the yolk. Feather follicles now cover parts of the limbs. The egg tooth begins to form.

More than halfway there! The eyelids are growing larger and covering more of the eyes. The allantois has reached its maximum size. The vitellus is beginning to shrink. The comb is now more prominent and is clearly serrated. Tail feathers have begun to appear. Feather follicles surround the opening of the ear. The eyelids continue to grow and are closer to covering the entire eye. The toes have now fully formed. The allantois shrinks to join the chorion and become the chorio-allantoic membrane. Scales appear on the legs and toenails form. Down now covers the whole body and is growing rapidly. The embryo turns it head towards the blunt end of the egg and gets into a suitable position for hatching. The chick is now mostly formed and there are few morphological changes. Down is growing larger and is continuing to grow, as is the embryo. The shrinking of the vitellus accelerates. The embryo begins to position its head under its right wing, which is the pipping position. The embryo continues to grow and assume the pipping position. Albumen continues to be absorbed. It's really taking up a lot of the egg now and most of the egg will look black upon candling. The embryo's renal system produces urates. The beak, now under the right wing, points to the air cell. The albumen is now fully absorbed. "Lockdown" day, when we stop turning the eggs and boost humidity. The chick starts to absorb the vitellus. There is a reduction in the amount of amniotic fluid. The vitellus is being absorbed more rapidly. The beak is against the air cell, ready to pierce it and internally pip. We have an internal pip! The chick has pierced the internal membrane and pipped into the air cell. It is now breathing air. Some gas exchange can happen through the egg shell, which is porous, giving the chick time to finish absorbing the vitellus. Vitellus absorption (usually) is completed on this day. External pipping may also occur. The chick inside the egg turns and starts to break the shell in a circle around the top, known as zipping.

(This picture is of a different egg because my original egg decided to hatch overnight.) The chick will push against the top of the egg until the cap pops off and it is free. A little drying later and it is ready for the brooder.

Here's our chick after 21 days of incubation and development: If you'd like to learn how to build a candler so you can candle your own eggs, there is a build guide on how to make one here. There are also recommendations for candlers you can buy here and here. Dark brown, green, and blue eggs can be hard to candle, so you may want to read about how people have candled their darker eggs here if you are currently dealing with the same issue.

Great article. Pictures are easy to make out, good quality, very good representation of what goes on during incubation. I haven't found an article other than this one to show pictures of the embryo after day 18. Maybe I'm not looking hard enough. Anyways, this was a great article and I read it twice. The summary of what happens in every picture is very compact and keeps your attention. Great job!
Thank you for a really useful file.
Reactions: JustAChickenLoverOverHere
This is such an informative article. Along with great photos because I know how hard it is to get a photo of the embryo.
Reactions: JustAChickenLoverOverHere
Read more…

Great article, Pyxis. I look forward to watching it develop!
Lovely images!
This is great!
Thanks everyone! I have added up to day 10 now.
Very informative
Great job!
Wonderful

awesome
Wonderfully done! Thank you!
Very helpful! Thank you!
Wonderful! Thanks for sharing!
love
I am planning on hatching some baby chickens pretty soon, but every time I gather the eggs they are somewhat cold. the temperature differs from 50 degrees F to about 65 degrees F during the day. I plan on gathering some next week since the weather will be more sunny. Will the eggs hatch if I keep them at room temperature overnight and put them in the incubator that morning? Also is there a way I can tell if my roo is fertilising the eggs other than cracking them? I have seen a blastoderm on the ones that I have cracked before.
shelbyw - The optimum temperature for storing eggs is actually 60 degrees, so the temps you are collecting them at are fine. You can then store them for up to ten days without them losing viability and hatch them, so your plan is fine.

There's no way to tell fertility aside from cracking them. You'll just have to candle them after a few days to check if they are developing.
Nicely done. Really helps show what can be seen with a flashlight and then informed as to what is happening inside that can't be seen.
Thumbs up great job
Thanks Pyxis Can't wait to do this !
Thanks Pyxis Can't wait to do this !
well done Pyxis - very helpful & fascinating!
Fabulous job Pyxis!!