featherhead007 said:
So, Tar would help with eczema, and other dermatologic conditions?

But I work with chickens, (Don't get me wrong,) But... Wouldn't that be considered "being tarred and feathered"?

Oh goodness, her feathers are so striking! Is this photo totally untouched?

RoyalChick said:
I assume it is a trick of the light, but is her eye OK? It looks a little 'misty'.
Click to expand...

I assumed it was her third (nictating membrane) eyelid?

These are great. I love that you have lap chickens like I do!

Shadrach said:
Mel arrived on her own again this morning as I was cleaning Cillins foot. I had the pad ready made and it didn’t take long before Cillin was fit for action. Here he is guarding Mel as she decides whether or not she’s ready to lay an egg.
View attachment 2494609


For the past couple of days I’ve carried Cillin out of the house when I’ve know Treacle isn’t near the bamboo clump and set Cillin down there. The rest of the day has been up to him.

Today when Mel decided she wasn’t quite ready to lay an egg she headed out the door, but stopped outside and waited for Cillin. Cillin was a bit reluctant but Mel called him a couple of times and eventually I watched them walk down the path away from the house together.

Treacle arrived at the house shortly after, on his own. Cillin had set up near Notch again and most of Tribe 1’s hens came down from the sheep field and joined him.

A while later Treacle came out to the bamboo; I was working in the car port, but wouldn’t go near Cillin and Notch.

The whole tribe except Treacle who was keeping his distance from Notch moved into the car port led by Fudge and Fat Bird on a mission to check if Bucket Boy had any treats. Treacle attacked Cillin then and drove him away.

Then Tap started demanding that Treacle goes nest site checking with her. This means either Treacle has to go alone with her which means Cillin will rejoin the hens or he has to move all the hens somewhere where Cillin wont risk going while Treacle is within strike range. Treacle tried to move all the hens. Fat Bird and Fudge in particular went having any of it and when Treacle got a bit too bossy they went off to my house.

Before Treacle and Tap can head off nest site hunting Moon did something I’ve seen her do a few times now and that is move out of Treacle’s sight and give an escort call. She does this it seems to pull him away from the rest of the hens. Treacle is stuck now. Does he go with Tap, go and collect Moon, or try and move them all to my house. Treacle went with the Tap option. Moon came to join Fat Bird and Fudge at my house in disgust and the rest sort of half heartedly followed Treacle and Tap up the track to the sheep field. Needless to say as soon as Cillin sees Treacle move off he folllows Fat Bird, Fudge and Moon into my house. Of course there is food there and Cillin gets them to eat. Treacle still does a major “this is my food and you can have some when I say” performance which just pisses everyone off and he ends up eating while the others wander off.

Of course the hens in the house are pleased to be left alone to eat and Cillin joins in.

I go up to the sheep field to make sure the straggling hens get to safety and on their way to roost. Treacle has already gone into the coop with Tap. This is a terrible mistake. He has three hens outside close to the coop but exposed and three more unaccounted for.
Mel realises the danger up in the sheep field and makes a dash for the coop, but Hurry and Tackle don’t. I have to herd Hurry and Tackle in.

When I get back to my house Cillin, Fat Bird, Fudge and Moon are together outside under the blackthorn bush.

At late dusk Fat Bird starts to head towards the side bank that leads up to the coop and Fudge follows and much to my surprise, Cillin herds Moon out and they all go up together. Cillin took them all the way to the coop ramp, watched them go in and headed back to my house and got in the nest box.

Well done Cillin. Cillin can move all the hens from place to place and I don’t think Treacle is going to be able to do this. Moving seven hens is not a trivial matter. It’s just one of the reasons three hens per rooster is a good number; it’s manageable. If one hen wants to go to lay then getting two hens to a safe place is a lot quicker and easier than moving six.
Click to expand...

I just love that Cillin; he really is something special.

STUNNING! Oh my gosh, that contrast between the black and buff!

micstrachan said:
Oh my gosh, this is heart melting!!! I do think you can "borrow" a rooster, but I personally would not do it, as he could bring illness to the flock.
Click to expand...

It totally made my day to see them all so excited about hatching some babies!

Agreed, I wouldn't want to take the chance either! 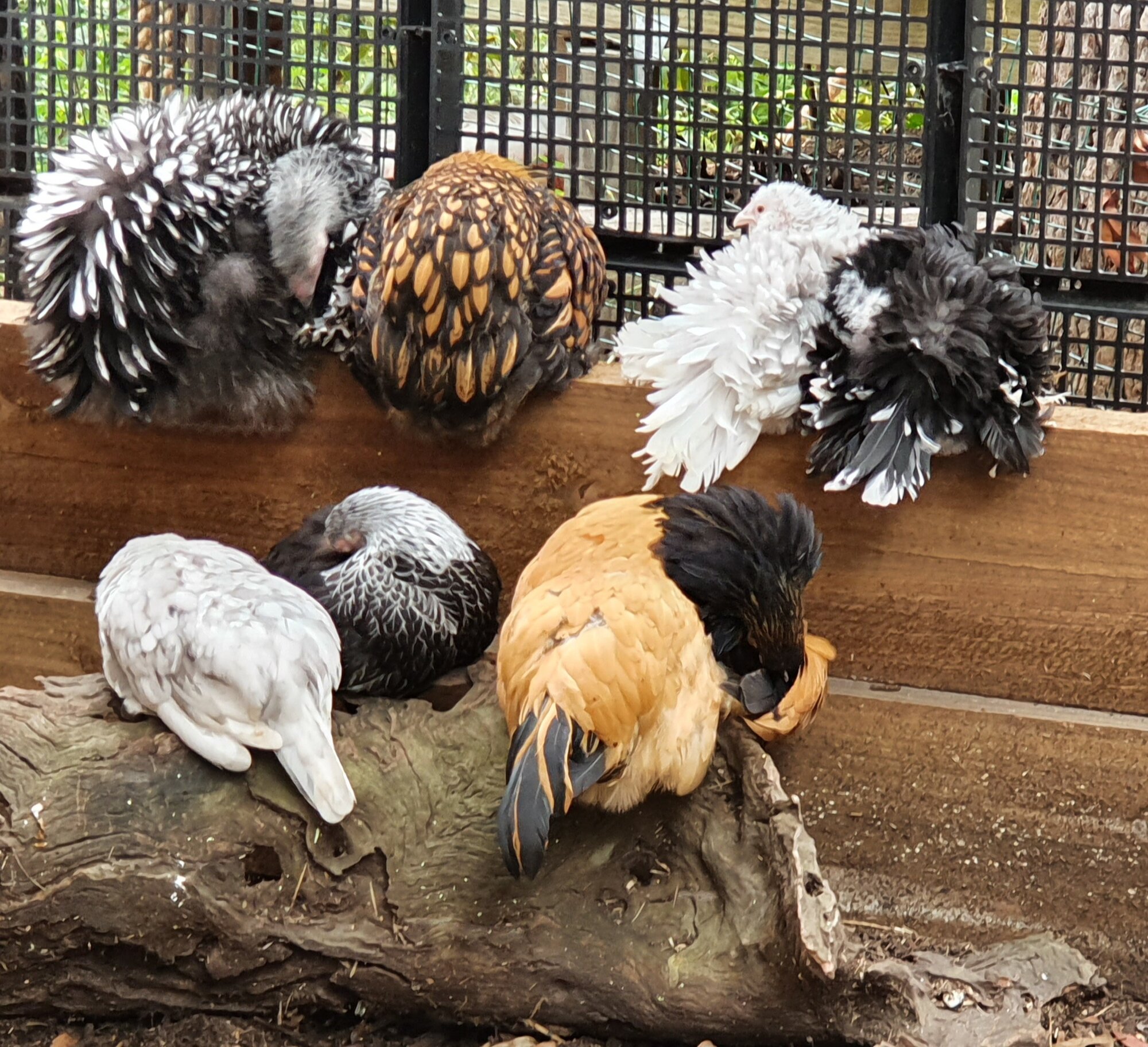 BY Bob said:
One Last Morning Together

I got "lucky" yesterday and I got one last coffee clatch with Ned and Lucky.

Here they were with their mom when it was time for me to let them out.
View attachment 2300951

Here is the run to freedom

I was able to video Lucky preparing the cushion for coffee Clatch time.

Oh my, to have them spend so many mornings with you like this is so special

And at least they are going somewhere where you can visit and get regular updates.
Just gorgeous little coffee companions